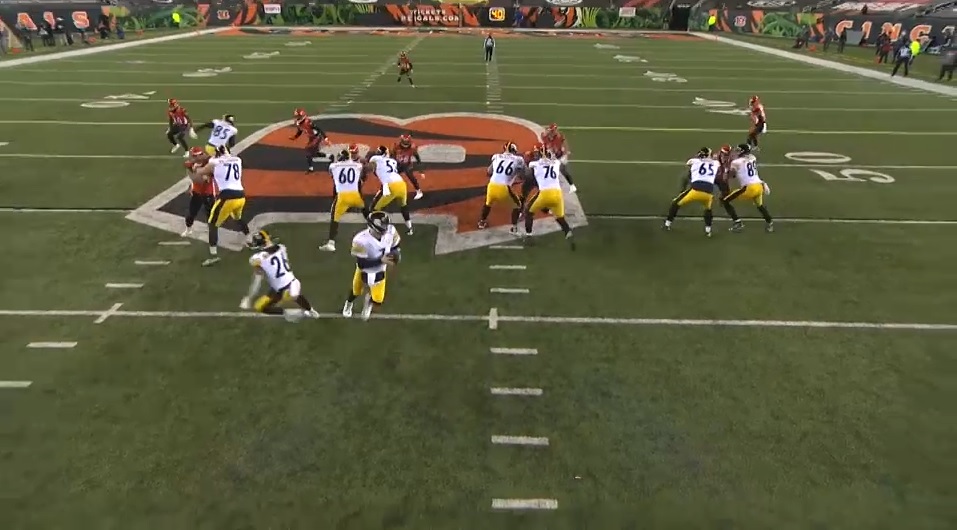 Last week, going into the game with the Cincinnati Bengals, I outlined the need for this Pittsburgh Steelers offense to figure out the deep passing game in order to start opening things up underneath. Needless to say, that did not happen. While the offense did start to make some things happen in the run game, the passing game is still very much a dumpster fire. This week that responsibility lies squarely on the shoulders of Ben Roethlisberger as Monday night was one of his worst performances in recent memory. As I mentioned in last week’s article, the matchup to watch from here on out is going to include this offense fixing itself issue by issue until it proves it’s a sustainable commodity. It continues to hold true that the defense is not the reason this team will lose games, but the offense’s incompetence sure has been one.

There were some glass half full takes to draw from Monday night, one of them being Steelers’ offensive coordinator, Randy Fitchner’s, playcalling. It will never be perfect, but after watching the film you can see most of the issues against the Bengals were player execution-related, not scheme-related. The biggest positive, in terms of play-calling, was the increased focus on play-action passes. Last week during his meeting with the media, Fichtner mentioned, “We’ve looked at certain play actions and some things to potentially create maybe more chunks down the field as well.” He doubled down this week mentioning that they’re looking to incorporate even more play-action into the gameplan.

Many fans will point to the myth that play-action is ineffective if a team has a poor running game. The fact of the matter is, there is no correlation between a team’s success on the ground and the efficiency of their play-action passing game. It is normally a benefit to a quarterback when the offense utilizes play-action. In Roethlisberger’s case, his completion rate actually drops from 65% to 53% on play-action plays, which ranks him 35th in the NFL per Player Profiler.

As previously mentioned, Roethlisberger had a rough game against the Bengals and his throws on play-action plays were not immune. On the first two drives, Monday night, the Steelers had one play-action play in each. Let’s take a look at them and how they affect the defense.

It’s important to note this is the first play of the game, but you can still see how it affects the linebackers on the run fake. In this particular play, opening the middle of the field is not essential, but when you can see how the play fake draws the linebackers up and can put the defense at risk to deep crossers. The receiver, James Washington, has a step on the cornerback, Roethlisberger just underthrows the ball by about 10 yards. It’s a throw he has to make.

I’m willing to bet when the Steelers coaching staff saw how the play-action affected the linebackers on the first play, it resulted in them coming back to the well again on their second drive.

It works just the same, in terms of the linebackers, and Diontae Johnson beats his man 1-on-1 on the crosser. It’s a great play design, and call from Fichtner, but your quarterback has to make the throw.

The Indianapolis Colts are coming off a 27-20 win over the Houston Texans where they allowed Texans QB, Deshaun Watson, to complete seven of nine play-action throws for 100 yards and two touchdowns. In terms of play-action completion percentage, Watson is ranked 26th in the league at 65. Still a far cry from Roethlisberger’s 53%.

Most of Watson’s play-action yardage came from play fakes with deep crossers. Take a look at the Texans’ first touchdown.

You can see across the board just how hard the defense bites on the run. The right cornerback also wrongfully leaves his zone in Cover 3 leaving the Texans wide receiver all alone for the touchdown. These are the types of plays you’d like to see Fichtner test and see if the defensive backs can get fooled again.

Here’s another example of crossers. This time the Texans have a deep and shallow crosser from the left and with the right outside receiver running a clearout 9-route, Watson has his choice of who to throw. It’s completed for a 20+ yard gain.

Lastly, we have more of an RPO look from Watson. Although it doesn’t look like Watson was really reading the linebackers here, you can see how it brings them up to the line of scrimmage and out of the throwing lane for an easy pitch, catch, and a touchdown.

All of these throws are meant to make things easy on your quarterback. The problem this year is it’s seemingly made life harder on Roethlisberger when these plays are called. However, with Fichtner outwardly saying there’s going to be more of a focus on play-action, who am I to call him a liar? It will be an interesting development this week and if Roethlisberger can have similar success as Watson against the Colts, it could be the missing piece that kicks this Steelers offense into gear.