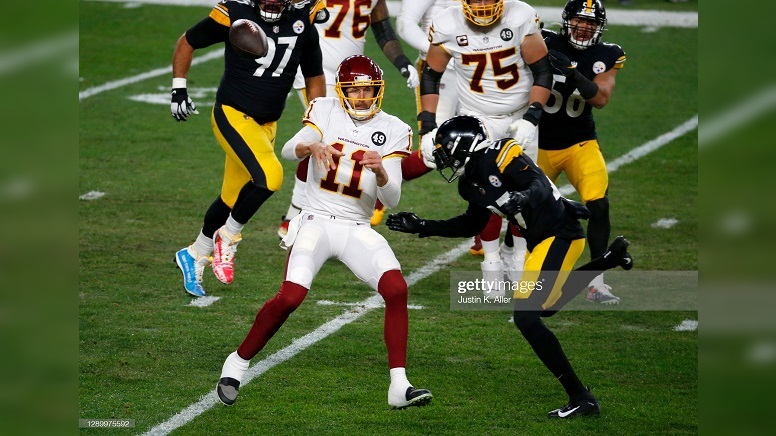 After playing 56 of a possible 75 defensive snaps on Sunday night against the Buffalo Bills, it certainly appears as though Pittsburgh Steelers inside linebacker Marcus Allen is headed for more extended playing time Monday night against the Cincinnati Bengals. On the heels of Allen registering eight total tackles against the Bills, in what was his first career start, Steelers defensive coordinator Keith Butler was asked on Thursday to evaluate the play of the Penn State product and talk some about the possibility of him making a permanent move from safety to inside linebacker.

“He’s about 205 [pounds], so he’s kind of a ‘tweener for us right now, but he does a good job for us,” Butler said of Allen, who was drafted as a safety but is now officially listed by the team as being an inside linebacker. “He’s does what we ask him to do. He’ll get better with time because it will be easier for him mentally and the things we ask him to do, he’ll know what we expect of him a little bit more. He’s got to put that time in it to determine if he’s a better linebacker or a better defensive back.”

Butler then went on to talk more about how Allen has played as a linebacker so far this season.

“The thing he has to do is make sure he knows what he is doing in terms of responsibilities, mentally,” Butler said. “I think at times he can get lost a little bit, but for the most part he knows what he is doing. There’s just a couple little things that give him little problems sometimes. I’m pleased with his progress. I think he’s going to be a good player for us. Whether he’s the backup or a starter, we have to wait and see when we get our guys back, all our guys back.”

Those players the Steelers hope to get back at some point in the next several weeks are inside linebackers Vince Williams and Robert Spillane. Williams is currently on the Reserve/COVID-19 list and it will be interesting to see if he’s cleared from that in time to play Monday night against the Bengals. As for Spillane, he’s currently on the team’s Reserve/Injured list with a knee injury and will remain there for at least the next two weeks. The return of one or both of those players will surely result in Allen going back to his role of being an occasional dime package defender on defense.

“We have some other good guys,” Butler said Thursday. “[Robert] Spillane has really done a good job for us. And Vince Williams has done a good job for us and stuff like that. We still have some guys at that position that are good players. What usually happens is when you have good players at that position, then you create competition and competition always creates better football players.”

The last thing that Allen needs to be worried about is his future past the 2020 season. For now, he needs to concentrate on the Monday night game against the Bengals as he might need to play just as much as he did against the Bills on Sunday night. According to what Butler said on Thursday, Allen still has a lot of developing to do as an inside linebacker.

“He’s having to play that linebacker position right now, and that doesn’t concern me because he is a physical guy,” Butler said of Allen. “He likes to hit, and he runs very well.”