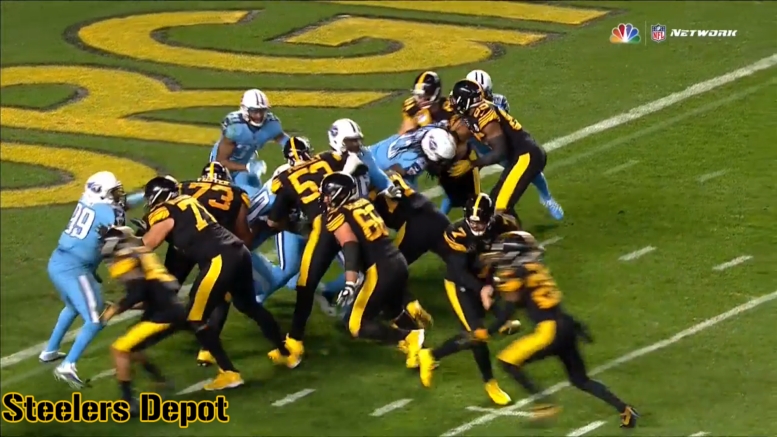 It’s time for everybody’s favorite game, Complain About An Aspect of the Pittsburgh Steelers’ Offense. Today’s topic is the play-action pass and the fact that the Steelers basically use it less frequently than anybody else in the NFL, a trend that has persisted for a number of years, even though, once upon a time, it was a strength.

By and large, it has been assumed that the Steelers don’t like to run it a lot because it’s not something that Ben Roethlisberger likes to do. He prefers, as pretty much all quarterbacks do, to operate out of the shotgun, doesn’t want to turn and run and put his back to the defense, etc.

Whatever the reasons might be, the bottom line is that it’s just something that the Steelers do very little, typically somewhere around the 10 percent mark, which is well below league averages, and which has been a consistent pattern for a number of years.

According to Pro Football Focus, Roethlisberger has by far the lowest percentage of play-action dropbacks among qualified quarterbacks this year, using it on just 9.6 percent of their passing plays. Drew Brees of the New Orleans Saints has the second-fewest at 16.5 percent. Interestingly, Philip Rivers is usually right around the same, but he is over 22 percent this year.

But they did use it more on Monday. In fact, Roethlisberger nearly doubled his season average, running it on 17.9 percent of his passing snaps, though he wasn’t at all successful doing it, completing two of seven passes for two yards. Still, it’s something that JuJu Smith-Schuster wants to see more of.

“I think that’s something that’s more diverse for the offensev”, he told reporters on Wednesday. “Being able to get Ben out of the pocket and running, that’s just something that we can add to our toolbox. Being able to run the ball, pass the ball, play action, just to hold the defense, where we can run overs and crossers and posts and out routes and stuff like that. I definitely see a positive turning point, but at the end of the day—two more weeks. We’ve got to keep going”.

Will they actually continue to further develop the play-action pass, something that is frankly long overdue? Is this an influence of Matt Canada, the quarterbacks coach, having been brought in this year and introducing some different wrinkles into the offense?

Most importantly, if they do run it, can they actually do it successfully? Roethlisberger hasn’t been that good on play action all year, with his completion percentage and yards per attempt actually lower than without play action. Only seven qualifying quarterbacks out of 38 had a lower YPA on play action. Only one had a worse differential, and he was one of two to have that differential be greater than a yard.