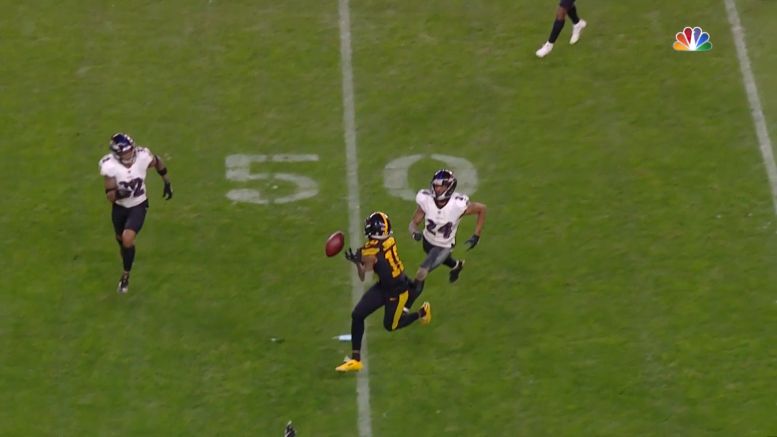 When it comes to the most fundamental aspect of their job, Pittsburgh Steelers wide receivers really dropped the ball, or at least did so far more often than one would care to see, on Wednesday against the Baltimore Ravens. Making catches is the single most important aspect of being a wide receiver, and they had more than half a dozen balls that ended up on the ground when they should have been in their hands for big plays.

Diontae Johnson and Chase Claypool, as well as Eric Ebron, all had multiple targets in which they were unable to complete the play. Johnson had one drop that likely would have been a touchdown, and another that would have been a crucial third-down conversion in the late stages of the third quarter. Everyone other than Benny Snell who had more than a target or two put a ball on the ground, including JuJu Smith-Schuster, who was not happy with his group’s performance.

“I think overall, I think, I don’t know how many we had, probably, like,  six or eight and those were crucial dropped passes where it’s third down, where it’s fourth down, these are plays that we have to make, especially in the red zone”, he told reporters after the game. “I think we had tremendous a lot of balls dropped in the red zone where possibly they could be seven points instead of three points”.

We have already discussed the dropped passes on a couple of different occasions, and even took a look at them in a film room article on the night of the game. At this point, nobody is going to be taken off guard by being informed of it.

The priority now is making sure it doesn’t happen again. This was perhaps the sloppiest performance I can recall from the Steelers in recent memory in terms of their failure to secure the ball. Pro Football Focus somehow only charges Ben Roethlisberger with having been the victim of five dropped passes on the day, but it was certainly more. He did finish tied for second in adjusted completion percentage for the week behind Alex Smith.

On the season, PFF has the Steelers dropping 26 balls. We have them dropping 28, and have flagged six others as being notable. The team was charged by PFF with 31 drops last year, though their targets were down as well. They had just 21 drops in 2018 with the most pass attempts in a single season in franchise history.

That’s just a reminder of how reliable Antonio Brown was on the field. Not off the field, of course. But having good hands, and reliable hands, is very valuable. Some of the Steelers’ current top receivers lack consistency in this area. Perhaps they will never develop it—generally, you don’t.