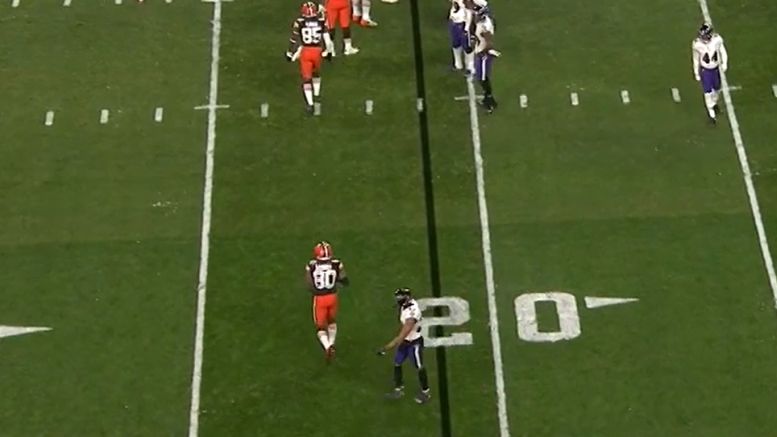 The Cleveland Browns and the Baltimore Ravens played a pivotal divisional game this past Monday night, seeing the score go back and forth throughout the second half. Quarterback Lamar Jackson had to issue two separate go-ahead drives in the final minutes alone, but ultimately scored the victory.

According to Browns wide receiver Jarvis Landry, he not only was handed a loss, but he was spat upon as well. The veteran accused Ravens cornerback Marcus Peters of spitting on him over the course of the game, and had some strong words about it as well.

“He’s a coward”, he said. “I think he knew that maybe behind my back he’d do things like that, but to my face, he wouldn’t. Take it for what it’s worth. Now I know. Everybody knows the type of player he is, the type of person he is, and just move on from there”.

Landry was responding to a video that was going around on Twitter in which Peters is clearly spitting, and in the direction of the wide receiver, who is walking away and unaware of what the cornerback is doing behind him. The spit does not hit him, but it comes reasonably close. Peters denied intentionally spitting at him.

Here is the video clip that prompted Jarvis Landry to call Marcus Peters a “coward” for apparently spitting at him as the wide receiver walked away pic.twitter.com/kPPgWoc1QX

“I didn’t spit at Jarvis. Where I come from, when you have an issue with someone, you deal with it face-to-face, man-to-man”, he told reporters on Thursday. “Anyone who believes that I intentionally spit at him does not know me — plain and simple”.

Whether or not Peters was attempting to spit on Landry, the video obviously is not great optics for him, and no matter what he says, Landry makes it abundantly clear what he believes to be true—and also that he is not going to forget about it.

He said that while he “won’t lose sleep” over the incident, he said that the next time they face each other—which will not be until next year, unless they happen to meet in the postseason, which is unlikely because they will almost assuredly both be wildcard seeds—he is “definite going to make it another game to remember”.

Landry caught six passes on nine targets for 52 yards during the game against the Ravens. Peters finished the game with five total tackles in addition to a forced fumble. It was the latter’s team that ultimately emerged victorious, and completed a season sweep, but the Browns continue to have the better record.