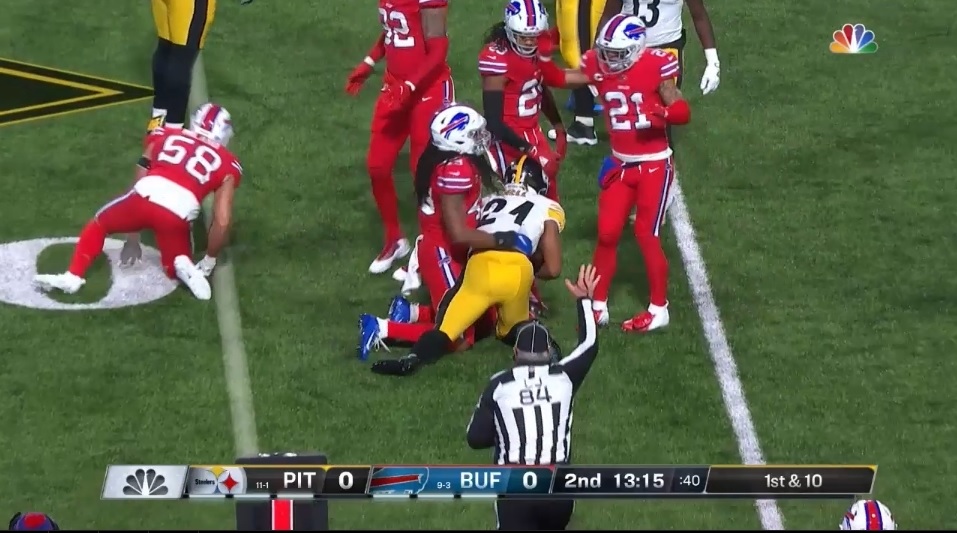 The Pittsburgh Steelers’ run game is a good summation of 2020. Not terrible at the start, running for 100+ yards in their first four games. That was your New Years – pretty fun!. Everything since then was been a depressing dumpster fire. The Steelers have the league’s worst run game since Week 6. And it’s not even close.

Here’s how their rush yards and yards per carry numbers stack up since.

So not only are the Steelers last they are comfortably in last place. Of course, you probably didn’t need me to tell you all that. You’ve watched the games. You’ve covered your eyes every time a back carries the ball.

It’s been hard to pin down exactly why they’ve struggled so much especially when it was successful early on in the season. The scheme didn’t change. The coaches didn’t change. Largely, the personnel didn’t change. But the execution feels a lot worse. Because it is.

Things were brutally bad in Sunday’s loss to the Bills. 47 total rushing yards, under three yards a carry. The game honestly felt plenty like the loss to Cleveland last season. Though there were multiple issues in the run game, too often, Bills’ linebackers simply running free. Today, we’re looking at that specific problem and how bad box counts and bad combo blocks played a role in the run game stalling. Again.

Here’s an example of just running into a bad box. This is an RPO. Slant/flat concept to the top with a run to the right paired with it. Buffalo is showing a seven man front here. Roethlisberger hands the ball off to Benny Snell and to the right side, the Steelers are -1. Four blockers (LG, C, RG, and RT) to account for five defenders to that side of the run (three defensive linemen, two linebackers). Maurkice Pouncey reach blocks the nose tackle while the RG climbs to the second level to the WILL linebacker once Pouncey secures his block.

The problem is there’s no one to pick up the SAM linebacker Tremaine Edmunds (#49). That’s not an assignment or scheme breakdown. Pittsburgh is simply outnumbered. So their best front seven player is now free. He takes a good angle to the ball, forces Snell to keep wide, and makes the tackle after just a two yard gain.

Here, Roethlisberger can’t hand this ball off. The play’s doomed to start. Even if DeCastro works to Edmunds, the WILL is now free. JuJu Smith-Schuster is pulling him wide with the pre-snap motion – slightly – but he’s not going to make that block.

On this play, it’s just bad execution. Duo run scheme. Double teams up front with one linemen peeling off to the linebacker based on the front they get. and how the LBs attack it. You see that between C Maurkice Pouncey and RG David DeCastro.

But you don’t get the same between LT Alejandro Villanueva and LG Kevin Dotson (replacing Matt Feiler). The block on #91 is secured but Dotson isn’t able to come off it and doesn’t try to. That leaves #54 lead to fill the B gap, completely unblocked. James Conner has to meet him in the hole at the line of scrimmage. He’s actually able to create, spinning away and making the linebacker miss, but that’s obviously not sustainable. Too many run stoppers running free at the line.

Draw play late in the half. Again, seeing a poor combination block. This time, from Dotson and Pouncey. In trying to sell the draw with a pass set, Dotson isn’t able to generate forward momentum to chip the nose tackle and then work to the linebacker.

Not only does the nose take on and come off the double-team, #54 is running free – again – to clean things up. This run goes nowhere.

Last one. One of the team’s three second half runs. Another combo block between LT Alejandro Villanueva and LG JC Hassenauer. Hassenauer third man to enter at LG after injuries to Feiler and Dotson. Just really ugly looking block between the two. Hassenauer’s steps never get vertical and he doesn’t get into a hip-to-hip relationship with Villanueva. He ends up being behind the block and late to get to the second level to climb to the linebacker.

That forces James Conner to cut the run back to the right. When he cuts back to his left (which probably isn’t a great idea) the LB now has the angle to fill the gap because of Conner’s initial cut to the right. No way for Hassenauer to have the leverage or angle to make the block. His only hope is to wash and seal him down and let the back cross his face. But Hassenauer doesn’t have the size/length or athleticism to get there and the LB is able to squeeze the gap and make the tackle.

Even *if* Hassenauer recovers, Villanueva and Ebron lose their man backside. For Villanueva, in part because Hassenauer was never able to chip the d-tackle so Villanueva could get better leverage and overtake the block. This run wasn’t going anywhere.

Consider this. The longest rush Pittsburgh had against the Bills came in that second clip. Conner spun his way for five yards, fumbled the ball, and JuJu Smith-Schuster fell on it after another three yards. So on the longest rush of the day, the offense picked up nearly as many yards via fumble as they did via rush.

I’m out of ideas how to fix this run game. I know they’re capable of getting better based on what they did early in the year. But I can’t explain why it’s been so rough for this long. The only way it’ll get better is because it’s hard for things to get worse (although this run game keeps digging a deeper ditch) but it’s hard to have any optimism things will get fixed this year. Just too many issues.