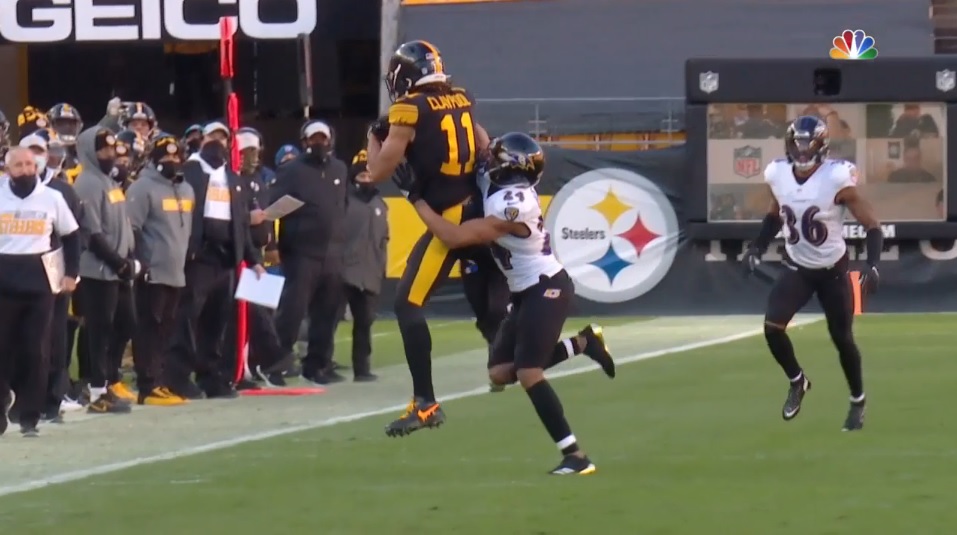 According to Fox Sports, coming into the game Wednesday afternoon, the Steelers’ receivers (and tight ends) have been credited with 17 drops. After their game Wednesday, by my count, they’ll increase that number by roughly 40% as they dropped the ball eight, yes eight, times against the Baltimore Ravens.

By my charting here is how the drops breakdown:

When you’re a team that has abandoned the run game for a spread them out, west coast type, dink and dunk offense this output is unacceptable. While the lack of ability to run the ball is disappointing, don’t get me wrong, I’m still fine with the offense the Steelers have been running with the weapons they have. They just have to do their jobs.

You’d have to go back to the 2017 AFC Championship against the New England Patriots to have a game that felt like no receiver could catch a pass. Biggest difference? That 2016 team’s receiver room was a far cry from today, rostering guys like Eli Rogers, Cobi Hamilton, Sammie Coates, and Darrius Heyward-Bey.

It’s important to note today’s performance wasn’t all on the receivers. A large part of the blame is obviously on them but quarterback, Ben Roethlisberger’s ball placement on some of these pays cannot be absolved completely either. Let’s take a look at some of the TV tape and break them down in order.

The first drop happened on the first drive of the game from Chase Claypool. Many will mention that Marcus Peters makes a great play on the ball, which is true, but let me show you why I chart this as a drop.

Claypool measured in at 6’4” with 32.5” arms at the NFL combine. When he doesn’t high-point the ball, or extend his arms and catch it at its peak, he takes his advantageous, long frame completely out of the picture. By letting the ball come to his chest, he allows talented cornerback, Marcus Peters, to get his hand in and knock the ball away. If he catches this at its highest point like we’ve seen him do on numerous other occasions, Peters is swatting his biceps instead of the ball and the Steelers offense is off to the races instead of a three-and-out to start the game.

Jumping right back into Claypool was the 2nd & goal pass from inside the 10-yard line. If you can see by my charting, I only have Claypool down for one drop. That’s because I have a really hard time calling this one. Maybe it’s my receiver-bias showing, but this ball is almost impossible to catch considering the circumstance.

I don’t want to ignore Claypool’s physical route running on this play as he presses Ravens cornerback, Marlon Humphrey, outside before using his strength to pull by inside on the slant. The All-Pro, Humphrey, just makes the better play as not only does he deflect the ball, he also rakes through Claypool’s arms at the catch point. This leaves Claypool trying to catch a rocket from Ben Roethlisberger with one arm. Impossible? No. Insanely tough? Yes.

Immediately following that play, Diontae Johnson, gave us a taste of the Diontae Johnson’s. No such excuses will be made for him as he gives you these types of plays once or twice a game that just makes you scratch your head. I don’t show it in the above angle, but he shows amazing footwork at the line of scrimmage and gets a contactless release inside on Marlon Humphrey. That’s the hard part for most receivers, not Johnson. The thorn in his side is concentration lapses on easy catches. If he secures this ball, he walks in untouched.

It’s something that worries me will always plague Johnson as he tries to take that next step from a good receiver to a great receiver in the NFL. I’d argue there’s no player in the NFL that puts you on more of an emotional roller coaster on a snap-to-snap basis than Johnson.

On to another red-zone drop. This time from James Washington. While Washington came up HUGE on his 3rd-down grab during the Steelers’ last drive to help seal the game, he was also invited to the drop party that helped the Ravens stay in the game.

The Steelers were running a fake receiver screen to Smith-Schuster in hopes that the cornerback would bite up leaving Washington open on the wheel. The All-Pro, Humphrey, again stays disciplined and carries Washington into the end zone with excellent coverage. Roethlisberger still attempts a back-shoulder throw and puts it the only place Washington has a chance to catch it.

The only problem is, I’m assuming due to the great coverage from Humphrey, Washington is seemingly surprised by the throw and is slow to get his head around. By that time he does, it’s too late and while he does get his hands up, he can’t reel it in. Pittsburgh had to settle for another 3 points on this drive instead.

Bear with me now, we have another back-to-back drop scenario after the Washington drop. This time by tight end, Eric Ebron. While this was frustrating simply due to another drop ending a red-zone trip if Ebron catches this ball not much changes. There’s a minimal chance he makes it into the end zone and the Steelers likely still kick the field goal.

It became increasingly frustrating as this was one of a plethora of situations where the Steelers threw well short of the sticks or end zone on third down.

After the first half filled with drops, Steelers fans had one thing to clutch onto heading out of halftime. At least JuJu Smith-Schuster always catches the ball, that is until he too joins in on the action. This was the first of two third-and-short drops that helped stall Steelers’ second-half drives.

On an RPO, the placement here by Roethlisberger is low, but when you’re throwing short across the middle, low is an excellent spot as it helps receivers protect themselves after the catch. We’ve seen JuJu make this catch countless times. In this case, Smith-Schuster follows yet another hot trend, as he does best, and comes up with a drop, only his second on the season. The Steelers would fail on 4th-down the following play.

It’s now time to talk about the plays that while I still think are drops, Roethlisberger’s placement does the receivers no favors. The first being the deep ball to Diontae Johnson on a corner-post route. Johnson again wows you with his route running and ability to create separation. He even high-points the ball, but he shows his main weaknesses with grip strength and tucking the football, where the cornerback is able to punch it out.

Where I take issue with Roethlisberger on this play is while Johnson should have made the catch, Roethlisberger has to throw this more on a line and inside. Johnson beats this cornerback clean and has to stop, jump, and attempt to make the difficult catch. There’s no safety help inside anywhere near this play. It should be an easy pitch and catch for these two. Instead, the ball is high and behind, falling incomplete.

If you made this far into the article, bless your heart. We have made it to the seventh drop. The second by Eric Ebron. It’s a simple flat route on 3rd & 2 where if it’s caught, Ebron easily picks up the first down and the Steelers continue a drive deep into Baltimore territory where if they score it likely put this game to bed. Instead, it bounces of Ebron’s hands.

This is the second ball that I have to put some blame on Roethlisberger. Should Ebron have caught this ball? Absolutely, yes, but he does his tight end no favors to throw high and behind him, while he’s running full speed to the sidelines. The blame goes both ways. These are the types of crucial plays in a ball game where if you leave that possible scoring drive on the table, instead of stepping on their throat, a good team will snatch victory from the jaws of defeat.

Mike Tomlin rightfully attributed the drops today to “us sucking.” That’s all it is. Every single one of these guys has more than enough ability to make these catches on a consistent basis. They and their quarterback have to figure it out on a short week as they have a Washington Football Team coming to Heinz Field riding high after a dominant victory in Dallas on Thanksgiving.