As the Pittsburgh Steelers enter the final stretch of the season, it is widely known that receiver Diontae Johnson is a – for lack of a better term – liability each time Ben Roethlisberger throws the ball his way.

The second-year player out of the University of Toledo is about as explosive and talented as they come. But it is hard to showcase that when Johnson has as bad a case of the drops as he does.

Through the first 14 weeks of the season, Johnson leads the NFL with 12 drops. Coach Mike Tomlin, as many are aware, benched Johnson during last week’s game against the Buffalo Bills after the receiver dropped the first ball passed his way.

That said: drops are a contextual statistic. If Johnson were targeted just 25 times this season and dropped 12 of those targets, he would probably be looking for work after this season. But that is not the case.

He had been targeted 110 times ahead of Monday night. And, out of his 2019 draft class, has the fifth-most yards (694), his 110 targets are the second only to Terry McLaurin’s 120, and his five touchdown grabs are tied for third with the Titans’ A.J. Brown and the Seahawks’ D.K. Metcalf leading the way with 10 touchdown receptions apiece.

In fact, Metcalf – considered by many to be an up and coming, if not already ‘there’ – superstar receiver has dropped nine of his 108 targets this season.

So, indeed, drops are contextual. But they are frustrating and, often, detrimental to offensive flow. The whole story is not told by simply saying Johnson has 12 drops.

Because of that, let us take a dive into some historical context to get a better grasp of how Johnson is performing. 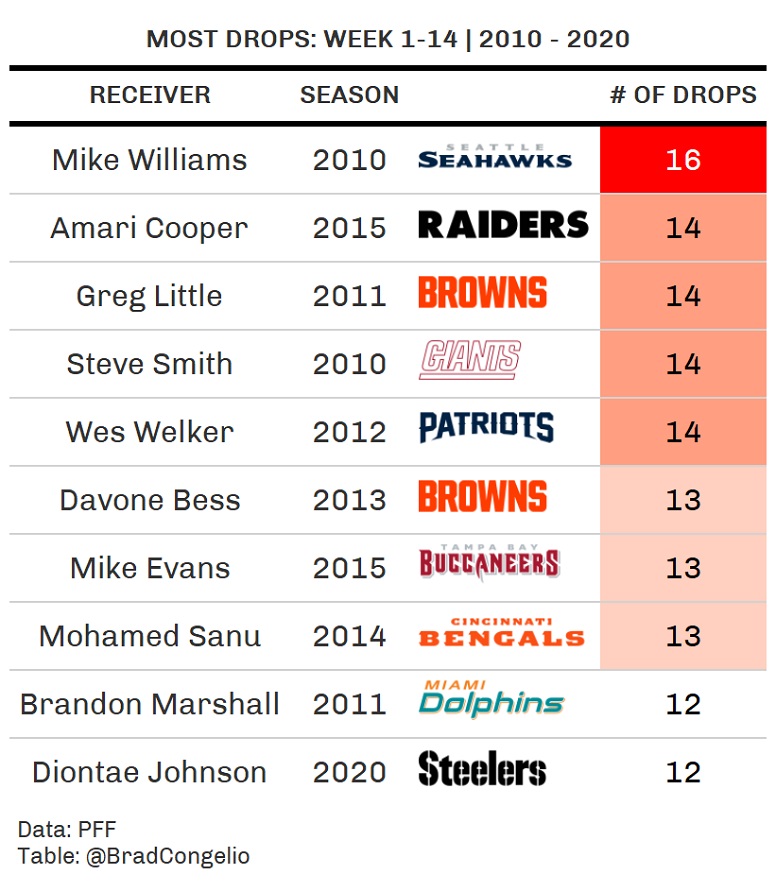 As seen in the above chart, Johnson’s 12 drops through week 14 of the 2020 season is just four shy of record dating back to 2010, which was 16 by the Seahawks’ Mike Williams. That is clearly not good company for Johnson to be part of.

Again, though: drops are a contextual statistic. Because of this, we need to explore the total targets and drop rates. Those 16 drops may not compare to Johnson’s 12 drops once contrasted against the total number of targets for each player. 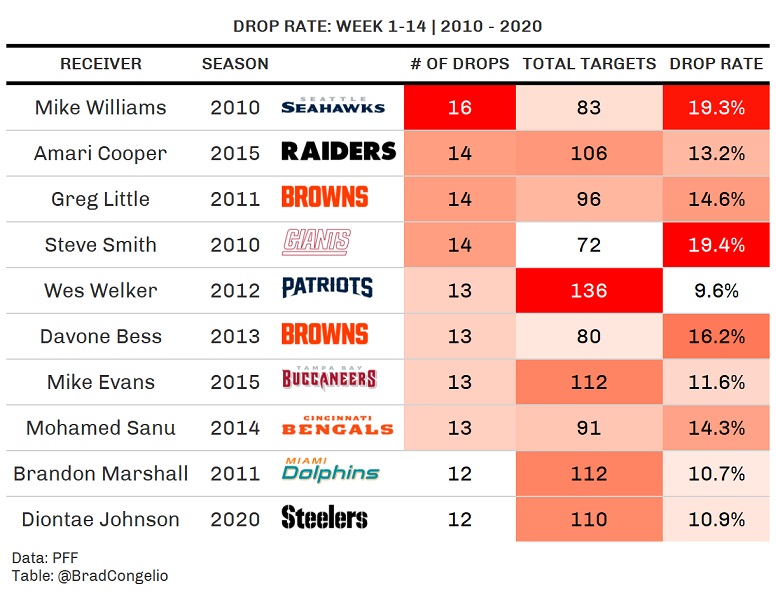 It is important to note that Pro Football Focus has Johnson at a 14.8-percent drop rate compared to just 10.9-percent in the above chart. This is because PFF is calculating the drop rate based on what they classify as catchable balls. Of Johnson’s 110 targets, PFF argues that just 81 of them were truly catchable. Therefore, 12 divided by 81 is 14.8-percent.

Personally, I think defining as catchable ball is entirely too subjective and, because of that, calculated the drop rate as the numbers of drops divided by total targets.

As detailed in the chart, Johnson has a 10.9-percent drop rate – meaning he has dropped nearly 11-percent of all passes intended for him. That is not a number you want to see, obviously. But, conversely, Johnson is one of the leaders among the group of players above in total caught percentage. With a catch rate of 62.7-percent, Johnson is behind only the Patriots’ Wes Welker and his 69.9-percent catch rate. For strictly 2020 comparison, Metcalf has a catch rate of 68.5-percent and fellow 2019 draftee A.J. Brown of the Tennessee Titans has a catch ate of 66.7-percent. And with nine and seven drops respectively, Metcalf and Brown are not far behind Johnson in total drops thus far in 2020.

Johnson’s star potential, despite his drops, is perhaps best viewed when compared to other receivers thus far in the 2020 season. 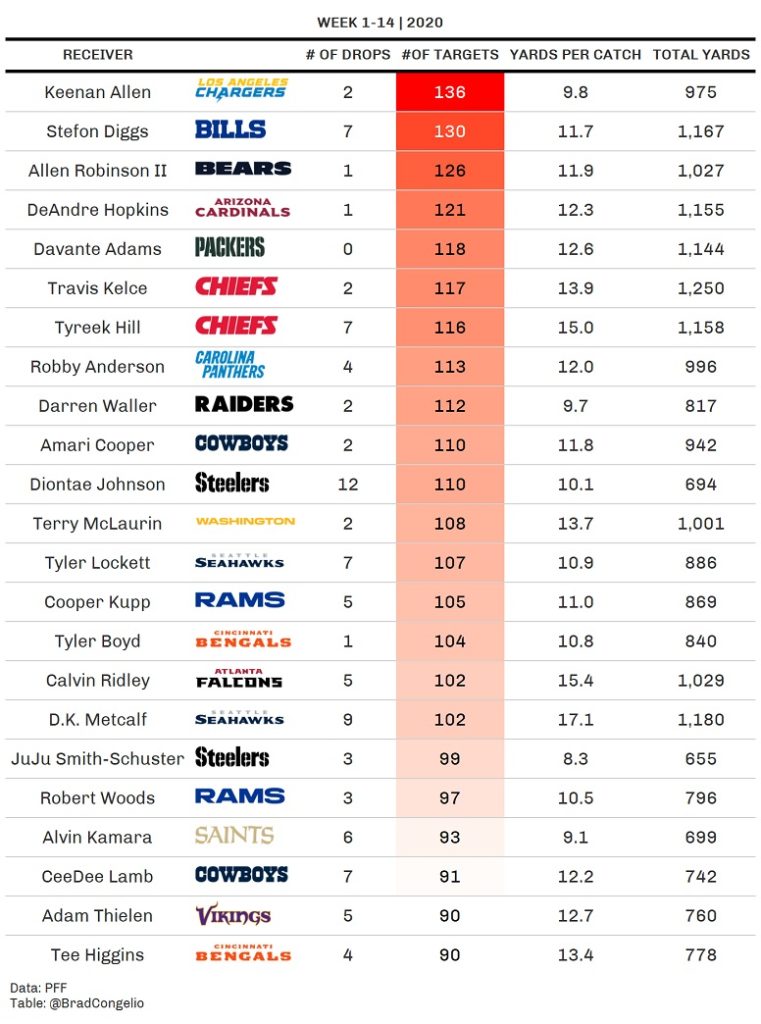 Through week 14 of the 2020 season, Johnson is one of the league leaders in targets with 110. Of course, he is also leading the league in drops with 12. His 694 receiving yards is clearly damaged by the amount of drops he has. For the sake of fun, we can roughly determine Johnson’s yardage if he were to maintain the league average in drops among those receivers with at least 90 targets.

After taking Johnson out of the equation, the average number of drops is 4. With an average yards per catch of 10.1, that hypothetically means that one could add 80.8 receiving yards to Johnson’s total if he were to have a drop number at the league average. In that case, his total yardage would increase to approximately 775 yards which would make put him in sixth place among those receivers drafted in either 2019 or 2020.

In the end: the drops hurt. They are hurting Johnson’s number and his confidence. More importantly, they are hurting the ebb and flow of the Steelers’ offense. That said: Johnson has the potential to be a truly outstanding, league-leading type receiver if he can get the drops under control.