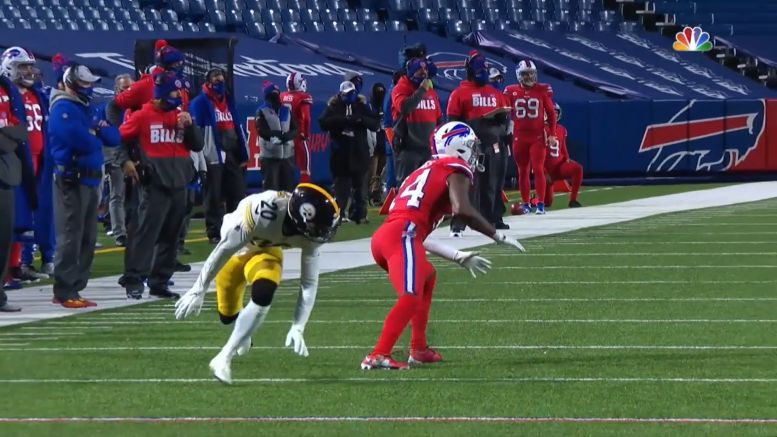 Stefon Diggs had four catches for 58 yards in the first half of last night’s game, the bulk of which came late in the half when they finally put together a field goal drive. He caught three passes for 50 yards in just a four-play span, including a 23-yard catch-and-run when he bounced off of Pittsburgh Steelers safety Minkah Fitzpatrick’s shoulder tackle attempt.

He finished the game with 10 catches for 130 yards and a touchdown, so he got busy in the second half, adding another six catches for another 72 yards, and he was able to work against both Steven Nelson (against whom he scored his touchdown, on a play on which the cornerback slipped) and Cameron Sutton, who was starting in place of Joe Haden, out with a concussion.

A lot of those battles came against Sutton, who was making his second consecutive start on the outside after starting in place of Nelson last week. It’s fair to say that he lost his share of battles. He was asked about defending Diggs and how the Buffalo Bills use him after the game.

“They’re a well-coached team. They’re a good, consistent offense, as well. Guys find ways to get the ball, whether it’s in his hands or moving him around”, he said. “That was some of the similar things that they did in the second half, as far as moving him around, moving him inside, outside, putting him in concepts, some things like that. Obviously, he’s one of their top playmakers, so they’re going to find ways to get him the ball. Our job is just to continue to step out there and shut that down”.

The 10-catch, 130-yard, one-touchdown game is one of the biggest performances that any player has had against the Steelers this year, who rank at or near the top in many of the most important categories in passing defense this year.

In all, quarterback Josh Allen completed only 24 of his 43 pass attempts, totaling 238 yards with two touchdowns and one interception, averaging 5.8 yards per attempt. His numbers were certainly not extraordinary, but he, and Diggs, put up better numbers in the second half after making some adjustments.

Diggs is the first player in the NFL this season to reach 100 receptions. He is also second in the league and first among wide receivers with 1167 receiving yards following last night’s game, along with five receiving touchdowns.