The Buffalo Bills have now released what will likely be their final injury report of Week 14 ahead of their Sunday night home game against the Pittsburgh Steelers and their Friday offering shows that just one player has been ruled out for the contest.

After failing to practice yet again on Friday, safety Jaquan Johnson (ankle) has now been officially ruled out for the Sunday night game against the Steelers. Johnson has primarily been used by the Bills on special teams this season. He failed to practice any this past week after being injured during the Bills Monday night win.

Johnson is the only Bills player to receive a game status designation on Friday. Listed as practicing fully for the Bills on Friday are defensive tackle Quinton Jefferson (hip), wide receiver Andre Roberts (achilles), guard Jon Feliciano (knee, foot), and quarterback Josh Allen (knee, ankle). Feliciano was the player to watch this week, but it now appears as though he’s good to go Sunday night against the Steelers.

Backup quarterback Jake Fromm (not injury related) is listed as a limited participant on Friday, but he’s expected to be one of the Bills inactive players Sunday night. Him being limited all week is likely related to the team keeping him separated due to potential COVID issues. 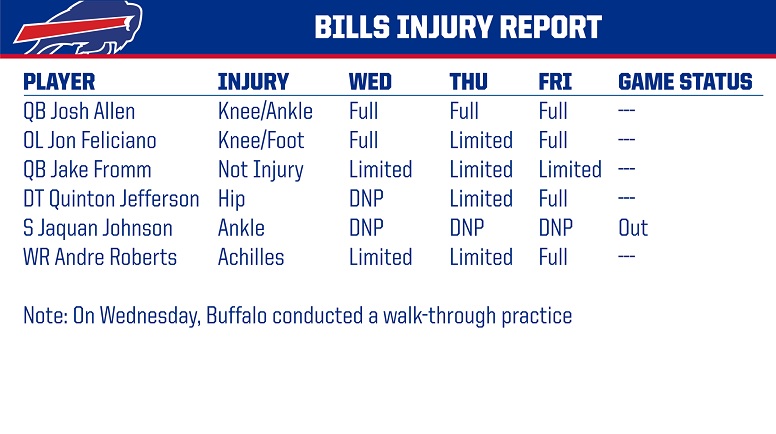