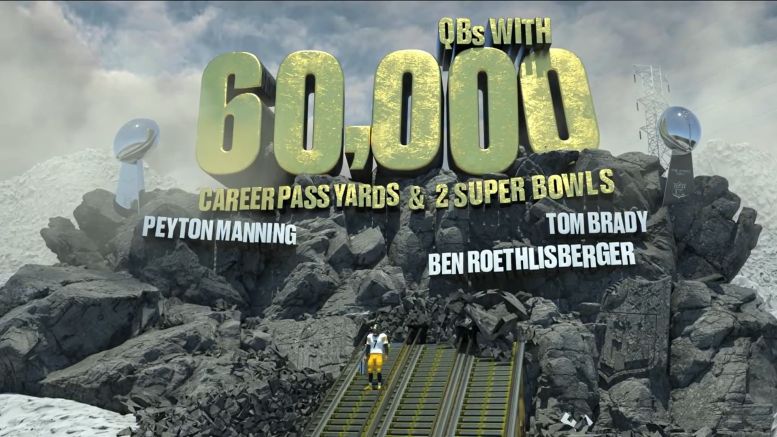 From what I have come to understand, years-long accomplishments only matter if the moment of accomplishment occurs in a game in which the team involved in said accomplishment is successful. That was the reaction from Pittsburgh Steelers fans when they broke the record for the most consecutive games with a sack recently.

On Monday night, quarterback Ben Roethlisberger hit two truly remarkable career milestones, but we didn’t even talk about it. That simply is not fair—and considering they might be some of the last milestones that he hits, it might be even more important to acknowledge it.

Despite it coming in one of his worst games in many years, the 17-year veteran reached two astounding plateaus in the Steelers’ loss on Monday night to the Cincinnati Bengals, hitting on the 5000th completed pass of his career and also surpassing 60,000 career passing yards.

Roethlisberger became just the seventh player in NFL history to ever throw for 60,000 yards, with 2004 NFL Draft classmate Philip Rivers having joined the club earlier this year. Dan Marino is closest at 61.361 yards. In fact, the top four members of the 60,000-yard club are also in the 70,000-yard club, with Drew Brees about to inaugurate the 80,000-yard club, needing 254 yards.

The Steelers quarterback also became just the sixth player in NFL history to complete at least 5000 pass attempts in a career—again, a mark that Rivers had been successful in beating him to earlier this year, though of course he didn’t miss almost all of last season.

As is the case with the passing yardage, the top four players in completions are in another stratosphere, with Brees, Tom Brady, Peyton Manning, and Brett Favre all surpassing 6000 completions. Brees has already hit on over 7000 passes.

How realistic is it that we ever talk about Roethlisberger hitting another major milestone like this? He would have to play at the very least into the 2022 season, if not the 2023 season, to reach 6000 completions or 70,000 passing yards.

But these numbers really should show just how rarefied is the company that he keeps in terms of career accomplishments. Yes, some of it is just due to longevity—he also has the eighth-most pass attempts in NFL history—but this shows that Roethlisberger is also one of the greatest to ever throw a football, and he will be entirely deserving when he is enshrined as a first-ballot Hall of Famer.

A Ben pass that will get lost in the sands of time Over 60,000 #Steelers pic.twitter.com/ED5uE6CU47