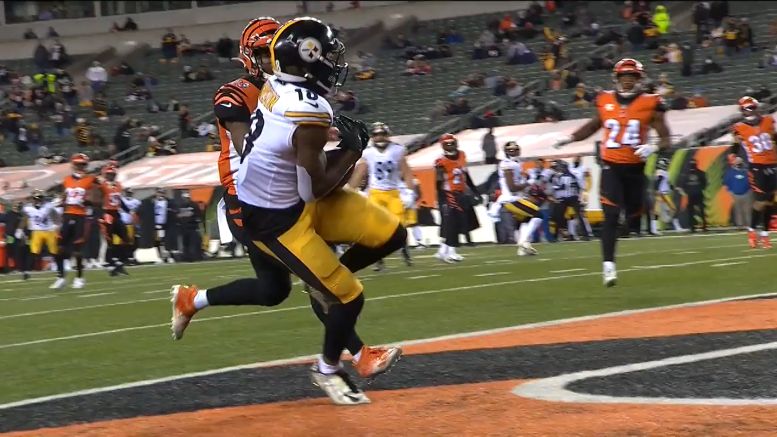 It’s hard to glean positivity from last night’s dismal defeat, which suddenly has the AFC North in play given how the remaining schedule breaks for both the Pittsburgh Steelers and the Cleveland Browns, but let’s try it anyway. How about the fact that second-year wide receiver Diontae Johnson showed up and played well after several weeks of consistent drops?

The young man was targeted 13 times throughout the night, and while he only caught eight of them, none of the incompletions were dropped balls. Those eight receptions went for a rather modest 58 yards, but his most important one was a 23-yard touchdown reception, his sixth score of the year, surpassing his rookie total from a year ago.

“I was happy for him and proud of him”, quarterback Ben Roethlisberger said after the game. “He made some really big plays for us today, so it was fun to see”.

Considering the fact that he was coming off three consecutive games in which he dropped at least two passes, and he leads the NFL in dropped passes on top of that, it was a pretty important performance in terms of re-establishing himself.

Johnson was actually benched in the last game after he dropped two passes for the Steelers, one on each of their first two drives. He sat out the remainder of the first half, but after Roethlisberger talked to him at the end of the half, he was back in the game and played almost every snap. He caught three passes on their lone scoring drive of last week’s second half.

With two games left to play, Johnson has already been targeted 126 times on the season, the most on the team, and tied for the ninth-most in the NFL. The Steelers are one of five teams to have two players who have been targeted at least 100 times this season.

If the Steelers are going to get things sorted out in time to make a run in the postseason, Diontae Johnson is going to have to be a part of that discussion. With the way he was playing, that was a serious question. Although last night’s game was a dismal failure overall, the second-year man’s bounceback performance is at least a small sliver of silver lining on a dark cloud.