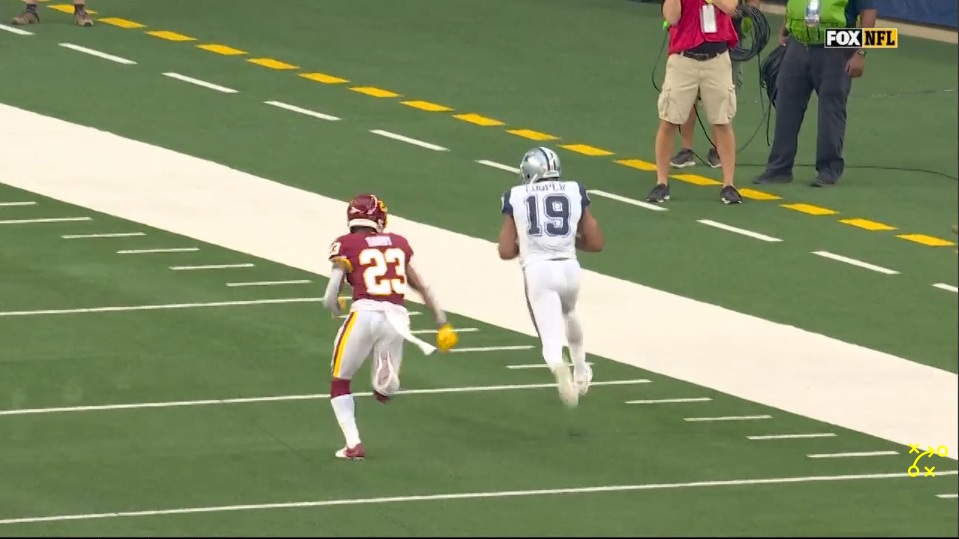 Detroit has three receivers to the left and a lone receiver to the right with the running back offset to the right of the quarterback who is in shotgun.  Washington has their nickel personnel on the field and are showing blitz with two linebackers at the line of scrimmage.

Reading a blitz from Washington quarterback Matt Stafford (9) will move tight end T.J. Hockenson (88) from the bunch formation on the left to the end of the line to help pass protect. This leaves Danny Amendola (80) in the tight slot and Marvin Jones (11) in the slot.

Washington is showing a single high safety look with the DB’s off the line of scrimmage. At the snap the linebackers are going to drop into Zone coverage in the middle of the field. The corners will drop to deep area of the field into a Cover 2 look with safety Deshazor Everett (22) holding his ground to become the robber. Safety Kamren Curl (31) and nickel corner Jimmy Moreland (20) join the linebackers in the underneath Zone coverage.

Marvin Hall (17) will run a Post Corner on the bottom of the screen. Amendola will run up the seam 15 yards before breaking to the outside.  His sell of the deep route will hold Kendall Fuller (29) toward the middle of the field. Jones runs a slot fade route to the outside and seeing Fuller holding in the middle he puts his hand up before he passes Moreland knowing how open he is about to be. Stafford will look right and gives a shoulder fake that way before hitching to the left and hitting Jones in the front of the end zone for a 27 yard touchdown.

Steelers Scenario – Ben Roethlisberger would jump at the chance to have a play be this open and against this coverage it works.  Diontae Johnson runs the Post Corner route at the bottom.  JuJu Smith-Schuster runs the seam route and Chase Claypool runs the slot fade route. You could also run a Post route with Smith-Schuster and throw it over the safety if Fuller stays outside.

The Lions are in their two minute offense and go with an empty set with three receivers to the left and two in tight splits to the right. Washington in is nickel personnel with the corners off the line of scrimmage.

Detroit spreads out their offense with running back D’Andre Swift (32) split wide to the left, Jones in the slot and Hockenson in the tight slot. To the right they have Amendola and Hall in tight to right side of the offense.  Washington will drop into a Cover 3 looks with Zone coverage underneath.

To the right Amendola will run a shallow Out route and Hall will run a deep Out.  Fuller is within range of Hall and DB Fabien Moreau (25) is underneath but Amendola has some space.  On the left Swift will stop at the line of scrimmage, Hockenson will run a curl route and Jones will run an Over route.

Stafford will read this play right to left. Hall is covered and the QB has already moved away from the Amendola route before he creates space.  As he comes back to the left the curl route will get linebacker Jon Bostic (53) to shuffle twice to the right. This opens up a throwing lane between the linebacker to Jones over the middle. Stafford hits him at about 13 yards and he adds 6 after the catch.

If Bostic holds his ground Hockenson, Amendola and Swift can all be options on this play.

Steelers Scenario – The Steelers would align Smith-Schuster and Johnson to the right.  Eric Ebron would be the tight end with Claypool or James Washington running the over route and this week Anthony McFarland would be the best receiving option on the outside.

The Lions have three wide receivers to the right with a tight end to the left and a running back offset to the left of the quarterback who is in shotgun.  Washington is in nickel personnel with one safety playing the single high and the other dropping into a robber role with everyone else in Man coverage.

Swift will motion from the backfield to the right and line up outside of the three receiver bunch. Bostic will follow him and this usually tells the offense that it is Man coverage.

Hockenson will run a fade on the left side with linebacker Cole Holcomb (55) on him. The four receivers to the right will overlap their routes attempting to confuse the defense and possible add some rubs to the routes to try to create space. The two inside receivers will go over the bunch with the two outside going under.

Starting on the inside Amendola will run up the seam and run a Dig route and is covered well by Fuller. Hall is facing Press coverage from Moreland and he will push through his jam and run a fade route to the end zone. Jones will run a shallow cross and this will force DB Ronald Darby (23) to loop around other players but he receives help from Curl in the robber role. Swift will run a Whip route breaking to the inside trailing Jones and then will plant and break back to the outside.

Stafford seems to like this matchup between Swift and Bostic immediately and he should. Swift should be able to win regularly versus a linebacker and he does here even getting some extra help when Bostic slips on the turf. Swift make a nice catch and is able to run over Moreland and get in the end zone for a 15 yard touchdown.

Steelers Scenario – This is a nice play design with the four routes starting from the same area.  Smith-Schuster would be on the Dig route with Johnson running the fade to the end zone.  Claypool/Washington runs the shallow cross and I believe either Benny Snell or McFarland can win on the whip route against Bostic.