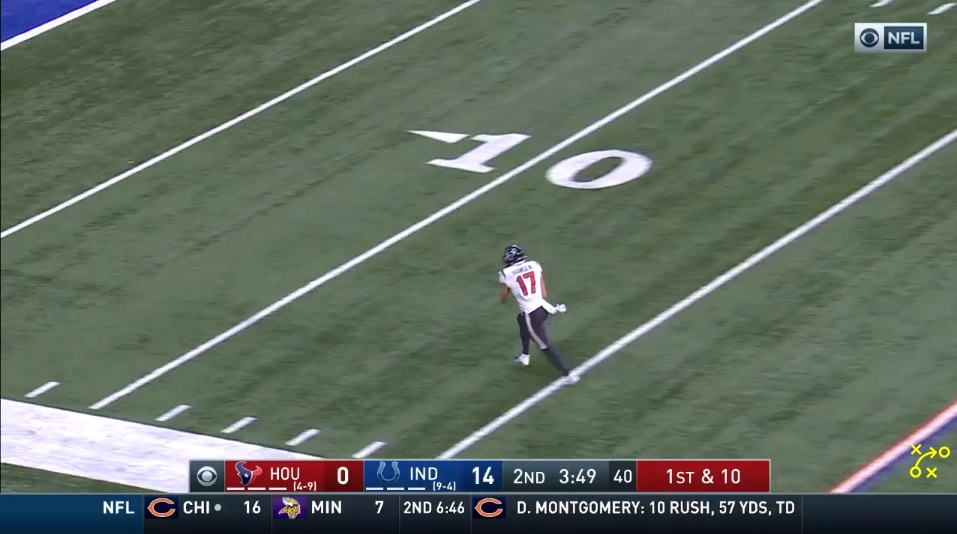 The Raiders have two running backs in an I formation directly behind the quarterback who is under center.  There is a tight end inline to the left and a tight end wide right with a wide receiver in the slot to the right. Indianapolis is in their base defense with 4 defensive lineman, three linebackers and four defensive backs.

Prior to the snap wide receiver Henry Ruggs III (11) will go in motion to the left and he’ll settle in the slot.  Defensive back Xavier Rhodes follows him across the formation indicating Man coverage.   At the snap quarterback Derek Carr (4) takes a three step drop and looks to his right where tight end Darren Waller (83) is running a stutter and Go against safety Khari Willis (37). Carr will give a little shoulder fake that draws the free safety Julian Blackmon (32) out of the middle of the field.

To the left Ruggs runs a short route into the flat. Tight end Foster Moreau (87) will release to the outside and turns his shoulders to the sideline to get the corner Kenny Moore II (23) to step that way. Moreau will then swim over Moore and head straight up the seam. Carr hits him in stride and he is able to make one defender miss on the way to a 47 yard score.

Steelers Scenario – This is an interesting play to use here because Moore covers TE’s in the seam so well. However, I saw Houston and Detroit also run similar seam routes against the Colts so offensive coordinators are seeing something here and it’s probably the size advantage putting a big TE against the 5’9” Moore.

The Steelers rarely run 22 personnel but if they do they would likely have to split Ebron out wide to get Willis to go with him. That would put McDonald on the seam route. It could have an element of surprise to it as they rarely throw to McDonald especially downfield.

Las Vegas has the quarterback in shotgun with a running back flanking him to the left. They have a tight end wide left and one on the wing to the right. There are two wide receivers staggered in the slot to the right. The Colts are in nickel personnel with 5 defensive backs and will drop into a Cover 3 look with three deep defenders and Zone coverage underneath.

QB Carr will take the snap and immediately look to the right toward Nelson Agholor (15) and gives a little shoulder fake in his direction. This gets Moore to jump the quick out route by Agholor. Carr will then come back to the left to look at Waller on the Dig route but Xavier Rhodes (27) is in pretty good position. He then looks at Ruggs on the skinny post but safety Julian Blackmon (32) has that covered.

Carr then quickly comes back to Agholor who was actually running an Out an Up. The little fake that got Moore to jump the Out has now opened up space and Carr hits Agholor in the area known as the “honey hole” between Moore and safety Willis for a 36 yard gain.

Steelers Scenario – On third and three you want to give the defense the thought that you may run the ball so 12 personnel works here.  Split Ebron to the left to run the dig route.  The receivers on the play are going to be JuJu Smith-Schuster to run the skinny Post and Chase Claypool on the out and up. They can set this play up by hitting Claypool earlier in the game with an Out route and then come back with the double move later.

Las Vegas has three receivers to the short side of the field with a tight end inline on the left. A running back is flanking the quarterback to the right in a shotgun formation. The Colts are in nickel with 5 defensive backs on the field and will rotate to a Cover 2 looks with two deep safeties.

Prior to the snap Zay Jones (12), who is in the tight slot to the right, goes in motion to the left. Once Jones gets past the center he is going to circle back around the quarterback back to the right.

The offensive line is going to run block to the left and running back Josh Jacobs (28) will cut across the face of Carr and fake taking the handoff.  Carr will then hitch to his right and throw a backward pass to Jones near the numbers.  This throw gets Moore, defensive back Rock Ya-Sin (26), linebacker Anthony Walker (54) and safety Blackmon to start downhill toward Jones but it will be a pass.

Hunter Renfrow (13) will run a Post pattern from the slot and Agholor will run a Go route down the sideline.  Renfrow is picked up by Willis but Agholor runs by Blackmon and is wide open. Jones will loft the past over the downhill defenders to Agholor for a 29 yard gain.

Steelers Scenario – The Steelers offense needs all the deception they can find so this fits the bill. The question is who throws it.  I don’t think any of the current Steeler receivers have thrown a pass in the NFL. Based on the use of motion the best options would be Claypool or Ray-Ray McCloud.

I think Claypool would draw the attention to get the defenders moving downhill and he may be left handed so they may have to run it in the other direction.  Use Smith-Schuster in the slot and Diontae Johnson on the Go route.