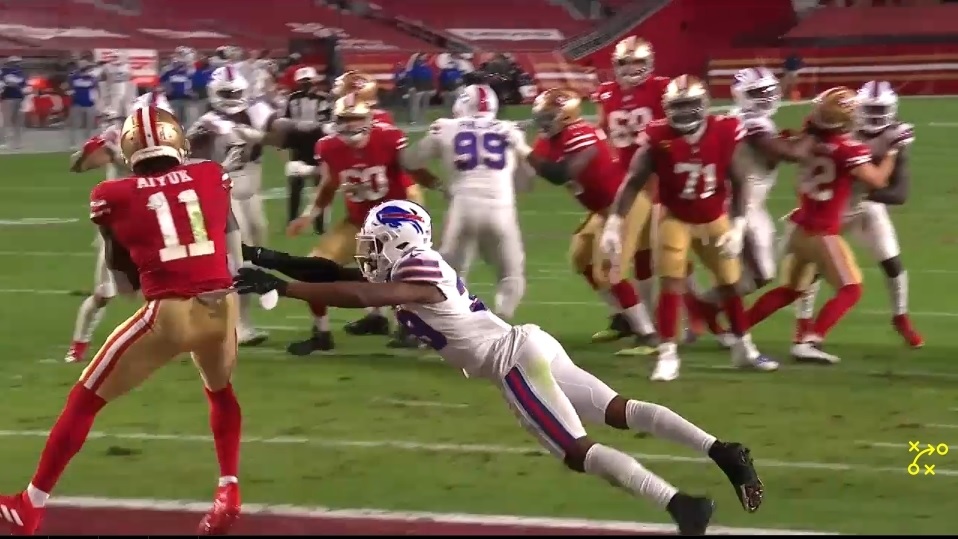 We’re going to start with a running play. Wide receiver Brandon Aiyuk (11) is alone split to the right with running back Raheem Mostert (31) in the backfield. To the left they have tight end Jordan Reed (81) on the wing, WR Deebo Samuel (19) in the tight slot with tight end Ross Dwelley (82) on the outside.

Buffalo has their defensive line in an Over front, with two linebackers and safety Jordan Poyer (21) about four yards off the ball.

Before the snap Dwelley is going to go in motion to the right and the ball will be snapped just as he passes Reed and before he crosses in front of the quarterback.  At the snap the offensive line will all step to the left and this gets the defense to react to their right. The two guards will block down on the defensive tackles and the left tackle will turn to the outside to block the right defensive end. The center will climb to the second level to block the MIKE linebacker Tremaine Edmunds (49) and the right tackle will climb as well to take on linebacker A.J. Klein (54).

The pre snap motion by Dwelley will put him at a full run toward the edge where he puts a shoulder into the hip of the left defensive end to cut him off. Reed will pull behind Dwelley to lead into the hole to take the most dangerous defender in this case nickel back Taron Johnson (24). There is a huge hold for Mostert who isn’t touched until he is about 13 yards downfield.

Steelers Scenario – The Steelers are struggling to run the ball and this type of play gets the defense moving in one direction to run the ball in another.  The Steelers could use Eric Ebron or Chase Claypool in the Dwelley role and lead through the hole with Vance McDonald. Any of the running backs could benefit from this quick hitting run.

The 49ers have a tight end inline to the right with a tight end next to him off the line with a wide receiver tight to the formation. To the left they have one receiver wide to the left. The quarterback is under center with the running back lined up behind him 8 yards off the ball. Buffalo is again in their base nickel grouping.

Samuel is the wide receiver to the right and he will go in motion and settle in the slot to the left. This moves the second level defenders two slides to the right and gets safety Micah Hyde (23) to come up to guard Samuel.

Samuel will then start back to the offensive right side in a jet motion and again this gets the second level defenders to move this time to their left. The offensive line is using a Duo blocking scheme (double team blocking the defensive tackles) and this indicates run to the defense. Quarterback Nick Mullens (4) will take the snap and show it to the running back Tevin Coleman (26) and this fake will pull Hyde up into the hole.

Aiyuk is the receiver wide to the left and he will run a shake route which is like a Post-Corner route but the receiver will flatten it to the sideline.  The defensive back Levi Wallace has his back to the sideline indicating Zone coverage. Aiyuk will break hard to the inside and as Wallace commits to the inside he whips back around to the outside to shake off the defender and is wide open at about 14 yards and he adds six after the catch.

Steelers Scenario – There is some flexibility to run this out of 11 or 12 personnel and would work best under center but could be done out of pistol as well. The Steelers would use Claypool or Ray-Ray McCloud as the motion man. They are the only two WR’s they’ve given the ball to in jet motion so that will draw the most attention.  Use Diontae Johnson on the shake route and let him get as much as he can after the catch.

San Francisco has a tight end on each wing and a wide receiver in the tight slot to each size.  Buffalo is again in their base Nickel.

As the case with a lot of the 49ers plays they will use play action to set up this play. At the snap the line will all shift to the right with their blocks as Mullens moves to his right to put the ball into the belly of Coleman. The movement by the receivers will essentially set up a Flood concept putting three receivers to one side on all three levels.

Aiyuk is the receiver to the left and he will break to the inside of DB Tre’Davious White (27) that has him in Man coverage.  He will work to get on top of White before breaking outside on a Corner route. Samuel will run a deep crossing route from the right to be the option on the intermediate level. Tight end Charlie Woerner (89) will drag behind the offensive line from the right wing and run a Flat route to be the option on the short level.

The quarterback will read this route combination from the top down.  White has good coverage on the corner route.  The safety Hyde is coming down to cut off the crossing route. They play action movement gets the second level defenders to move left leaving Woerner with a free release to the outside. The pass travels only 2 yards past the line of scrimmage but leads to an 18 yard gain.

Steelers Scenario – This can be run with the QB under center or in shotgun.  The key is to sell the run fake to get the defense moving.  Use Johnson on the Corner route, JuJu Smith-Schuster on the crossing route and McDonald in the flat.  They very rarely throw to McDonald so the element of surprise is there.