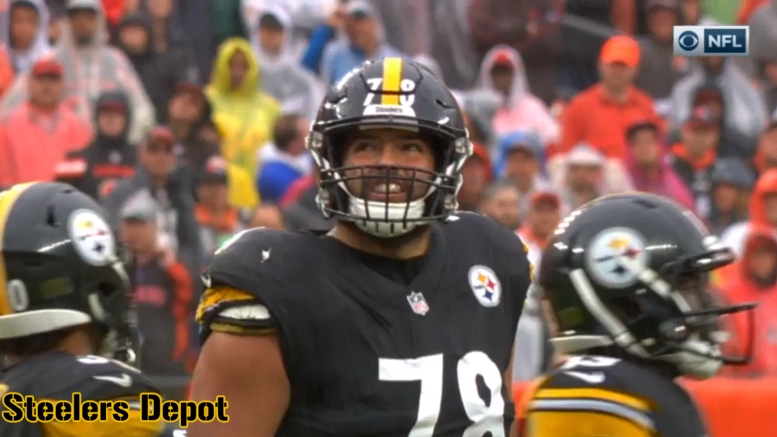 Whether a calamity all of their own doing or aided by a crippling pandemic, the Pittsburgh Steelers are facing a harsh financial reality when it comes to the 2021 season. With the salary cap expected to be, at best, no higher than it is this year, and a number of high-profile players scheduled to be free agents or due contract extensions, the likelihood is that there will be an exodus of talent between now and the start of the next season.

One of those players who has a very good chance of playing in another uniform in another city next year is Alejandro Villanueva, who has been the blindside protector of Ben Roethlisberger for the better part of the past six seasons. He commented on his free agency status earlier today.

“This is the 16th, 17th city that I’ve lived in in my life. I don’t know what it’s like to know where you’re gonna be next year”, he said, speaking about his upbringing as a military child. “My whole life, it’s been, ‘where are we gonna go, dad? Where are we living next year?’. Hopefully somewhere within nine hours of our grandparents so we can maybe see our cousins”.

“For me, it’s no different, there’s nothing I can do about it. I can give you all the cliches, things you can control, things you can’t control”, he went on. “It is for sure something that makes you appreciate everything, friendships with teammates, there’s the city of Pittsburgh, western Pennsylvania”.

As readers are surely aware, Villanueva has had a roundabout way to where he is now. Originally recruited to Army as a tight end, he ended up playing along the defensive line his freshman year before spending two years on the offensive line—and then as a wide receiver his senior year.

He would go on to serve multiple tours of active duty, where he would be decorated with honors, in between failed stints of trying out for teams as a tight end. Finally, in 2014, the Philadelphia Eagles gave him a look at defensive end. The Steelers played them in the preseason, and added him to the practice squad when he didn’t make the Eagles’ roster, moving him to the offensive line.

Needless to say, things have been good for him since then. He has made millions of dollars and enjoyed a very successful and decorated career as a Pro Bowler in his profession. But he also understands the nomad’s life, and doesn’t necessarily feel any debt toward Pittsburgh or the Steelers.

“It’s been an interesting years of my life, and I don’t know what’s going to happen in the future, but it’s not something that I dwell on”, he said. “I’ve lived in 17 other cities, and I know I probably won’t live in Pittsburgh 10 years from now, so it’s something that just makes you appreciate space and time and all the weird things that we have going on around us”.

It shouldn’t be a shock to hear him say that he doesn’t expect to settle down and live the rest of his life in Pittsburgh. After all, many Pittsburghers in the past several decades fled the city themselves, spreading out around the country in a diaspora that gives the illusion of a well-traveled fan base when the Steelers play on the road.

Nevertheless, here’s to hoping that the two sides find some way to stick together for at least another couple of years.