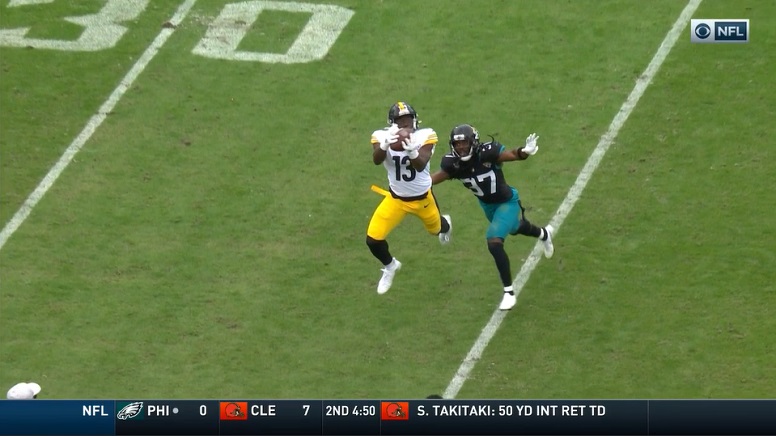 This piece may come off as me merely ranting on a personal annoyance.

And for that I apologize.

But, as a Pittsburgh Steelers fan – and even a football fan in general – nothing grinds my gears like a team throwing a screen pass or wide receiver bubble on third down when there is over five yards to go.

I get exceptionally angry when it is third down with eight or more yards to go.

In many cases, it seems like the offense is playing for a few extra yards of field position for the punter rather than being aggressive and going for the first down.

The Steelers have certainly not been innocent of doing such this season. In fact, Pittsburgh – while facing a third down with between five and ten yard to go this season – has, on 13 different occasions, opted to throw for zero to three air yards.

In other yards, the pass distance in the air was not aggressive enough to get to the first down marker.

Like I said, this is nothing more than a small personal annoyance of mine. But it did get me wondering:

What quarterbacks are the most aggressive in the league in these types of situations?

To answer this, I decided to filter all of the 2020 season’s plays to include just those that occurred on third down with between five and ten yard to go. To determine QB aggressiveness – that is, how often they threw the ball to the sticks or more – I calculated the following formula:

It is a pretty simple concept. I am adding together all the pass attempts for individual quarterbacks where the air yards equaled the total amount of yards needed or more. For example, in a third-and-5 situation, the QB would need to throw the ball – a minimum –  of five yards to the point of reception. That summation is then divided by the total number of attempts in the third-down situation.

The end result is an aggressiveness percentage – or, how often a quarterback threw to the sticks or beyond in a third down situation with five to ten yard to go. The results are interesting. 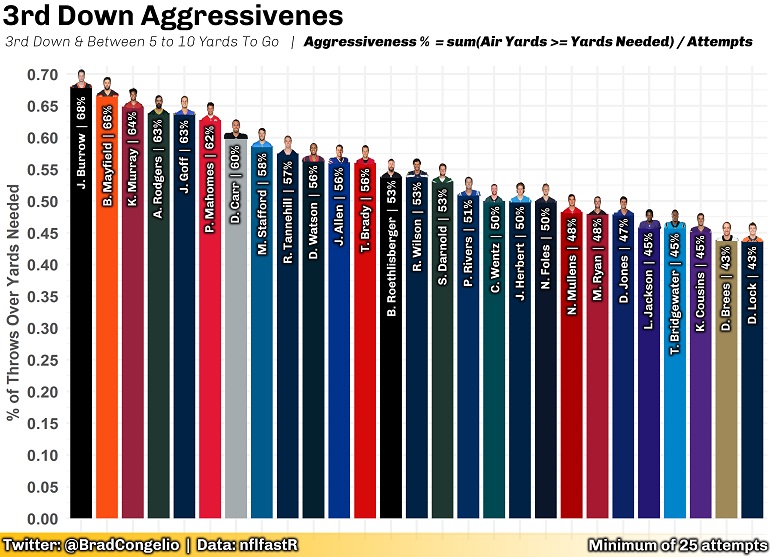 Cincinnati’s Joe Burrow (get well soon, of course!) leads the NFL in aggressiveness at nearly 70-percent. Cleveland’s Baker Mayfield is right behind him at 66-percent.

For Pittsburgh faithful, Roethlisberger is smack in the middle of the NFL with a 53-percent aggressiveness rating.

That said: which receivers have caught those passes when Roethlisberger opted to be aggressive and go for the sticks?

With a little tweaking of the above formula, one can come up with this chart: 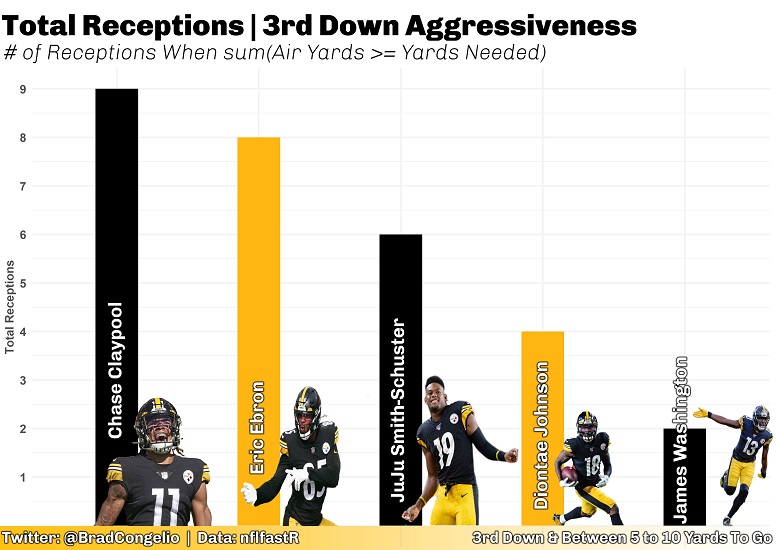 Not really that surprising. It is the cast of characters you would expect Roethlisberger to trust in those situations. As well, with his nine receptions in these aggressive situations, Chase Claypool is near the top of the leaderboard. Both A.J. Green, of the Bengals, and Anthony Miller of the Chicago Bears, have 14 total receptions while three players have 11 and six others have a total of ten.

Looking at one season is interesting. But, what does Roethlisberger’s aggressiveness stat look like over the course of his career? 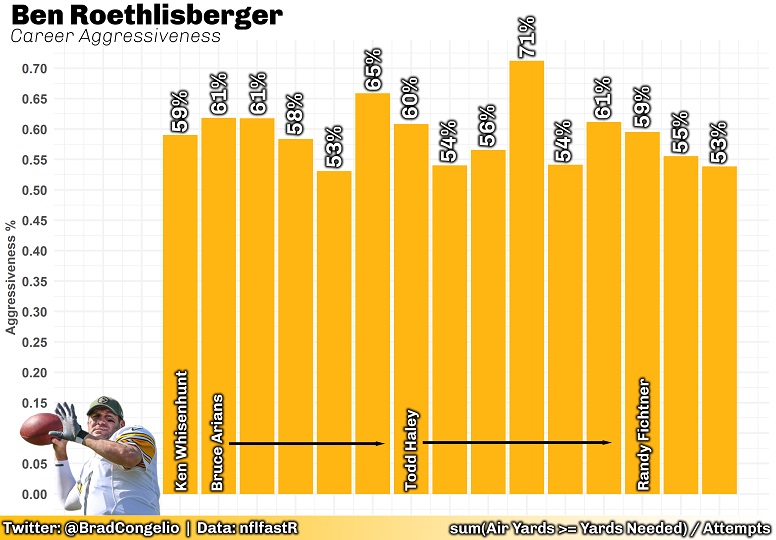 First and foremost, you will notice a lack of aggressiveness stat for Roethlisberger’s first two seasons in the NFL (2004 and 2005). That is because the air yards metric was still in its infancy and not largely tracked until the 2006 season, which is where you see the stats start for Roethlisberger in the above graph.

There is very little difference on a year-to-year basis for Roethlisberger’s aggressiveness stats except for 2015, when he skyrocketed to just over 71-percent – the highest number of his career. Even more, it was an oddity in Todd Haley’s offense. In Haley’s years as the offensive coordinator, Roethlisberger’s aggressiveness rate stayed within the roughly 55- to 60-percent range.

The 2015 jump to 71-percent is, by far, the largest jump for Roethlisberger under any offensive coordinator. Seeking an explanation for that, however, will be another article for another day.

Finally, since we examined Roethlisberger’s aggressiveness over his career, let’s also take a look at the receivers over the course of his career to catch his “aggressive attempts:” 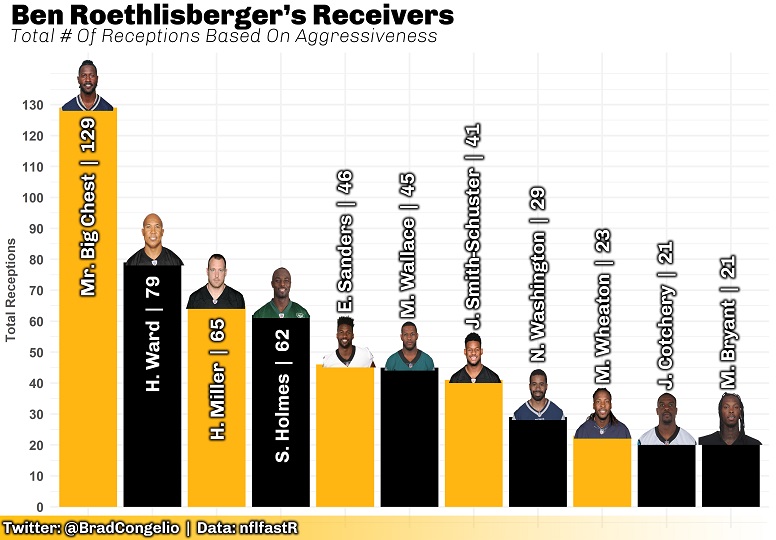 Mr. Big Chest himself, Antonio Brown, is Pittsburgh’s career leader in catching balls from Roethlisberger deemed aggressive by the above formula. With 129 such receptions, Brown outpaces Hines Ward’s 79 receptions and both Heath Miller and Santonio Holmes, with 65 and 62 catches respectively.