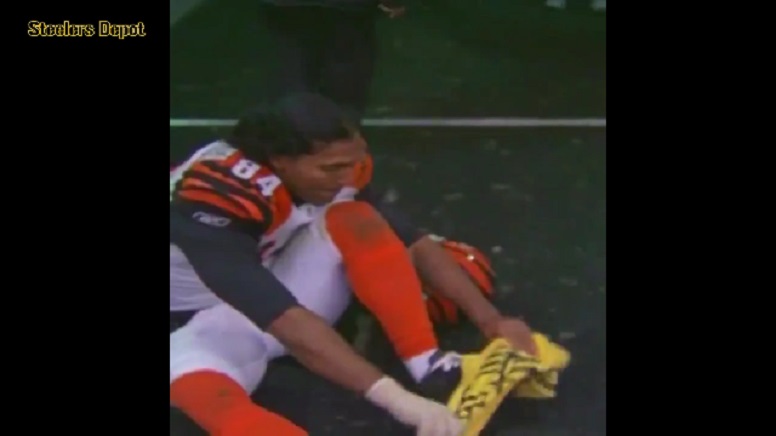 It’s officially Week 10 now and that means it is officially “Bengals Week” for the Pittsburgh Steelers and their fans. While the rivalry between the Steelers and the Cincinnati Bengals really isn’t a rivalry right now at all with Pittsburgh having won the last 10 meetings between the two teams, whomever runs the social media account for the team from Ohio must have missed that memo and it’s caused quite the stir on Twitter.

On Tuesday, the Bengals Twitter account tweeted out an old video clip of former wide receiver T.J. Houshmandzadeh shining his shoes with a Terrible Towel following a 2005 Cincinnati victory over the Steelers at Heinz Field and that obviously didn’t sit well with some current and former Steelers players as you’ll see in the collection of tweets below.

This never ends well….proud of you though lil bro. Dad(Steelers) said he home before the street lights turn on 😂😂😂 https://t.co/H2fUkKWXAK

This ended well for you 😒

They 2-60 vs the Steelers and posting stuff like this. Somebody has to get fired.

Disrespect! You try and tell the young people to learn from their mistakes.

Remember how that ultimately worked out for the Bengals after that 2005 Houshmandzadeh shoe shining at the expense of a Terrible Towel? While both teams ultimately made the playoffs that season, the Steelers beat the Bengals in an AFC Wild Card game in Cincinnati and they went on to win Super Bowl XL.

The following season, Houshmandzadeh only had one regret about his disrespecting of the Terrible Towel and that’s that he didn’t do it in the end zone after he scored a touchdown against the steelers during that 2005 win at Heinz Field.

“I regret I didn’t do it in the end zone when I scored; that’s what I regret,” Houshmandzadeh in 2006 before the Bengals played the Steelers for the first time that season. “That’s when I should have done it, but I didn’t have one at the time. I would have done it.”

That season didn’t end great for the Bengals, either, as the Steelers beat them in the final week of the season to prevent them from going to the playoffs. That was the final game that head coach Bill Cowher coached as well.

What’s quite interesting about what all is unfolding at the beginning of this week with the Bengals and their Tuesday Twitter video is that Houshmandzadeh spent a lot of the offseason working with Steelers rookie wide receiver Chase Claypool. In fact, Claypool has talked quite a bit about Houshmandzadeh ever since the Steelers drafted him.

“Up until I came back [to Canada for the draft], I was working with T.J. Houshmandzadeh, which is kind of my receivers coach, and he’s been doing a really good job”, Claypool said back in May. “So, I’m working with him in California. Whether I go there for a couple weeks and then up to the facilities or just go straight to the facilities, I’m not sure, but that’s kind of what I was doing for receiver work”.

So, if and when Claypool goes off against the Bengals on Sunday and the Steelers win the game, Cincinnati fans can probably thank Houshmandzadeh for it all. His shoe shining gif is the gift that keeps on giving to the Steelers in the form of Ws.