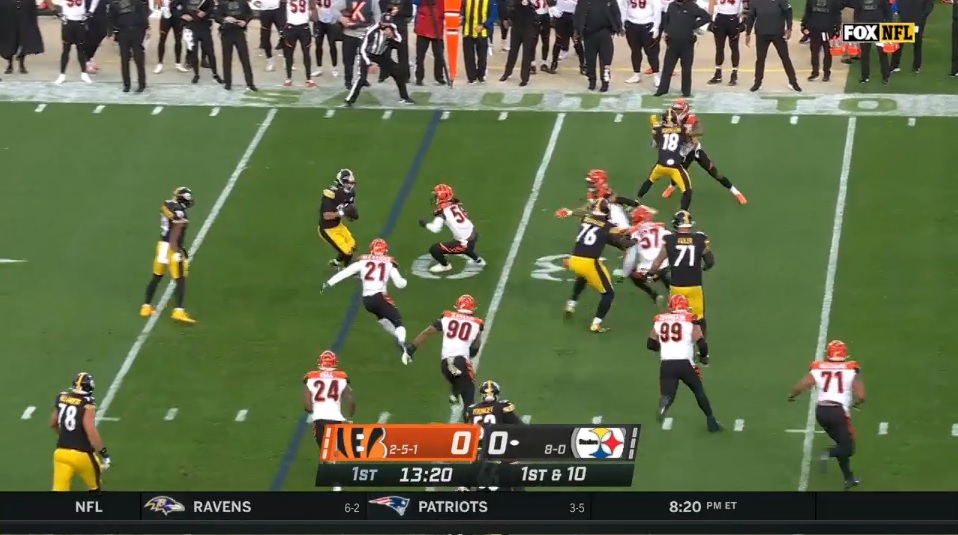 It’s not often you can win four straight games with almost no semblance of a run game. But that’s where the Pittsburgh Steelers find themselves today. They’ve knocked off the Titans, Ravens, Cowboys, and Bengals despite a rushing attack averaging under four yards per carry. Mike Tomlin knows – and vows – for things to improve. Talking with reporters at his Tuesday press conference, Tomlin was repeatedly asked about the team’s struggling ground game. He blamed the struggles on multiple factors.

“It’s generally usually a combination of [issues with playcalls, execution, and defensive scheme],” Tomlin said via the team website. “Specifically last week, I was not surprised of the commitment that Cincinnati had to pack in the line of scrimmage. We stepped into a stadium where we hadn’t seen our quarterback all week. And so it’s reasonable to expect them to have an agenda, to push us toward that in an effort to check his readiness, our collective cohesion, or what have you in that area.”

Sure, Roethlisberger’s performance was a bit more on an uncertainty knowing he missed most of the week while on the COVID list but the idea the Bengals dared Roethlisberger to beat them seems flimsy, especially after Roethlisberger got rolling in the second quarter. Even after that, the run game didn’t get any better. Tomlin said it’s an issue they’re continually examining.

“But sometimes we’re just not doing good enough as well. And so it’s a combination of all the things that you suggest we’ll roll our sleeves up and get about the business of attacking it this week.”

Pittsburgh has been held under 50 yards rushing in three consecutive games for the first time in team history. They’re just the second offense, joining the 2019 Chargers, to have such a streak over the past four seasons. These poor outputs have come against some of the league’s worst run defenses. Dallas ranked 30th, Cincinnati dead last, yet James Conner and company did zero damage.

Despite Conner’s last three weeks, averaging 2.8 yards per carry, Tomlin remains committed to him as the feature back.

“He is [our featured back]. We’re going to get better.”

Tomlin seemed optimistic the problem will get solved, chalking the problems up to the ebb and flow of the season. Pittsburgh ran the ball well early in the season. Now they have to find a way to get back to that point.

“We’re going to roll our sleeves up and solve it. We had a similar discussion a couple of weeks ago where you guys were asking about our third and long defense. We did similar things there and I expect similar results in regards to the run game.”

Of course, those third down issues were largely isolated to one game against the Eagles. Woes in the run game have existed for the last month, suggesting a bigger problem and tougher fix.