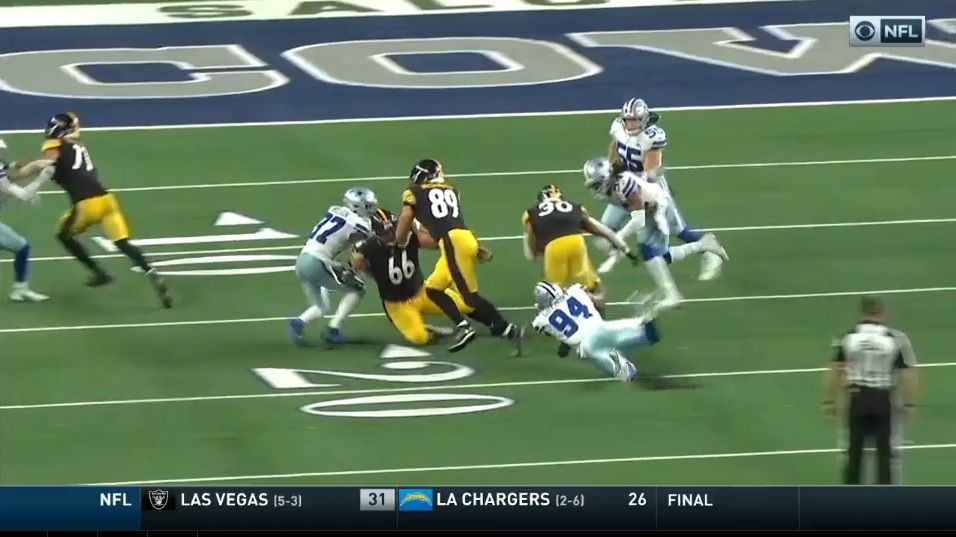 It felt like Cam Heyward’s 4th down sack won the game.

The Pittsburgh Steelers’ defense needed one more raise-your-blood pressure stop to get out of Arlington with a victory. That was in part thanks to the Steelers failed 4th down conversion, James Conner stuffed on an attempted power run left side. Pittsburgh could’ve kicked a field goal to go up eight. After the game, Mike Tomlin explained his decision.

“Man, we had struggled so much with our field goal group early in the game,” Tomlin said to reporters after the game. “I didn’t feel good about it. They were beating us to the punch pretty much for the better part of the day on special teams…I had just seen enough of their dominance in teams.”

Here’s a look at the failed run. David DeCastro and Vance McDonald pulled across the formation but tried to kick out the same Cowboys’ defender. Conner was forced to run laterally, had no running room, and was tackled for a loss.

Tomlin’s fears about the kicking game were founded. Boswell missed his first extra point wide left and had his second blocked. The Steelers were also called for a false start on an end-of-half attempt. Tomlin said they planned for the Cowboys to shift in an attempt to get Pittsburgh to stop. Still, the team didn’t execute.

“That was just another example when we weren’t on the nuts and bolts of it from a special teams standpoint. They do that shift trying to get you to jump all the time. We worked on it and we failed in that instance.”

That penalty found a way to help the Steelers. Boswell missed the initial try but the false start negated the whole play. He nailed the 59 yarder, a career long and franchise record.

Clearly, Tomlin’s decision to go for it had as much to do about a lack of confidence in special teams as it was confidence in his offense to get the job done. That reflects poorly on STs coordinator Danny Smith and his unit and clearly, one of several areas this team has to get cleaned up for next Sunday’s game against the Cincinnati Bengals.