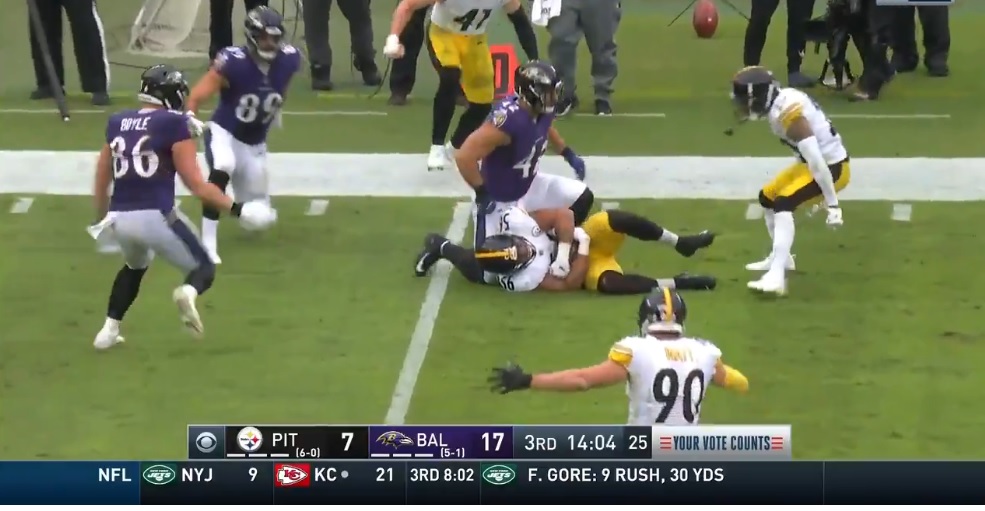 Winners and losers from the Pittsburgh Steelers wild 28-24 win over the Baltimore Ravens.

Robert Spillane – Spillane got the game started off on the right note with a pick six of Lamar Jackson, the first Jackson had thrown in his great career. Terrific zone read, close, and finish by Spillane. He also played the run hard, even if the Steelers’ run defense struggled for large portions of the game, and showcased his typical, old-school intensity.

Alex Highsmith – Highsmith was the other Steelers linebacker with an INT and helped get the Steelers back in the game. Played a ton of snaps in some three OLB sets. Picked off Jackson on a curl/flat drop early in the second half that led to an Eric Ebron touchdown. Highsmith is a smart, impressive athlete who looks really comfortable in coverage.

TJ Watt/Bud Dupree – EDGE rushers making big plays in coverage. The two combined for a pair of sacks today and Dupree’s forced fumble was huge with Baltimore deep in the red zone. Watt finished the day with five tackles and five QB hits along with a sack.

Stephon Tuitt – While the Steelers’ run defense as a whole suffered, it’s hard to blame Tuitt. He was fantastic, whopping on the Ravens’ backup RG after starter Tyre Phillips was lost early in the game. One of the top linemen in the game. His quickness, fluid hips, and hand use continue to amaze.

JuJu Smith-Schuster – Credit to Smith-Schuster. He’s not making a lot of plays downfield but he’s a Hines Ward tough underneath receiver coming up clutch on third downs and finding soft spots against zone coverage. Tough receiver up to the challenge of today’s matchup.

Run Defense – Ravens boasted the best running attack in football heading into this one. They’re staying in first place after this one. Hard to put the blame on any one guy and losing NT Tyson Alualu to a knee injury early in the game really stung. To his credit, Isaiah Buggs stepped up in the second half.

But more often than not, the Steelers failed to have a good answer for Baltimore’s multi-pronged attack. Linebackers had a tough time getting off blocks, the mesh charge of attacking the QB gave Pittsburgh only ten to defend with on many plays, and Baltimore’s scheme slowed down the Steelers’ aggressive unit. Ravens ended the day with 265 yards, the most allowed by the Steelers in nearly 30 years.

To be fair, the Steelers made a run stop in the biggest moment of the game, tackling Lamar Jackson short on a designed QB draw on 4th and 2.

Jaylen Samuels – Samuels value to the team is…unknown, to put it mildly. One ugly drop that would’ve been a first down that led to a Steelers punt the next play. He’s supposed to be the team’s receiving back but drops far too many passes, this isn’t a new issue, and it’s hard to justify him taking away snaps from anyone right now.

Defensive Communication – Specifically, on the drive that gave the Ravens a 24-21 lead. Multiple blown coverages that led to conversions on 3rd and 14 and 2nd and 22. Devin Duvernay found himself wide open down the middle while Willie Snead was all alone over the short middle. Hollywood Brown was wide open in the corner of the end zone later on the drive before finding the end zone on a sprintout the following play. Just a really bad sequence at a terrible time. And then another on 4th and 2, Willie Snead (again) wide open over the middle.