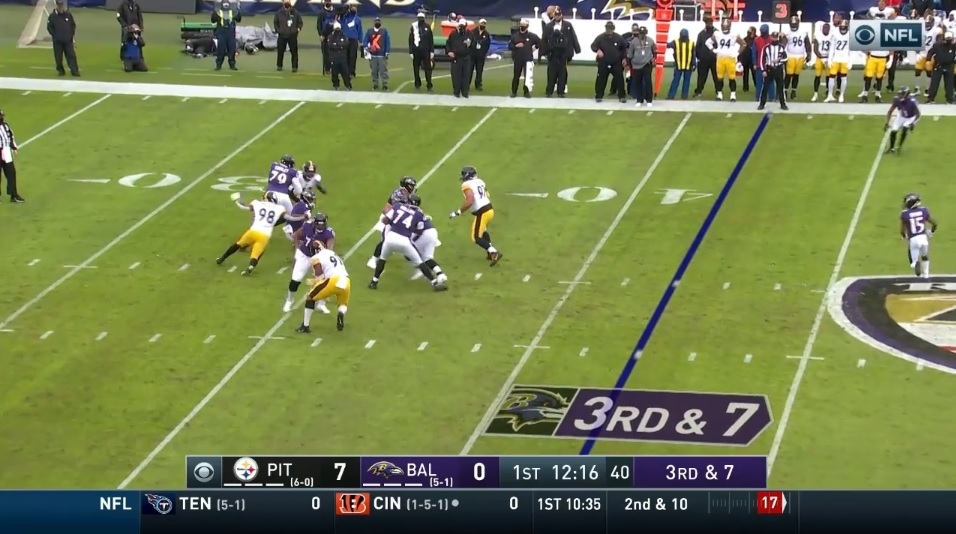 After putting together two outstanding tackling performances in back-to-back weeks against the Cleveland Browns and Tennessee Titans, the Pittsburgh Steelers took a step back Sunday on the road in Baltimore, struggling at times to corral Ravens ball carriers.

It wasn’t a dreadful performance overall, but it was certainly below standard that the Steelers have set this season.

Vince Williams had a rough game on Sunday in the tackling department.

Sure, he was around the football a ton and forced the issue in the backfield multiple times, but he struggled to wrap guys up, leading to a team-high three missed tackles in the win, which really did a number on his miss rate, which was top 3 on the team coming into Sunday’s game.

Stephon Tuitt also recorded multiple misses on a day in which he dominated. Tuitt that the best miss rate on the team prior to Sunday’s game and has been arguably the best defender the Steelers have had all season, all due respect to TJ Watt.

While the number for the group looks high from Sunday’s game, it’s important to note that 55% of the misses on Sunday came from two guys.

Before we get to the missed sack here by Williams, can we just admire the job Cam Heyward does eating up Bradley Bozeman and Matt Skura on the twist so Williams can fly in free? He’s so darn good at it.

Vince does a great job getting up the field in a hurry to put heat on Jackson, but he’s a bit out of control and doesn’t account for Jackson’s ability to slide left in the pocket. You can see Williams lunge for Jackson and get an arm on him, but it’s not enough to take down Jackson.

Once Jackson is out of the pocket, he avoids Tuitt near the sideline before Minkah Fitzpatrick wraps him up. That’s when Heyward comes in with an additional hit, which drew a strange late hit flag, considering Jackson was still in the field of play.

In the second quarter, Gus Edwards got going for Baltimore, largely thanks to some great blocking.

As he does that, Williams gives chase and misses before Joe Haden cleans it up. From the point of Williams’ miss to the point Haden gets Edwards on the ground, there’s an additional 11 yards. Not great.

On the Ravens’ final drive, the Steelers got a bit sloppy in the tackling department, namely Marcus Allen and Cam Sutton.

This should have been a simple dumpoff to J.K. Dobbins that should have been brought down quickly. Instead, Dobbins forced two quick misses by Marcus Allen and Cam Sutton – both of which recorded their first misses of the season – giving the Ravens some life.

Heyward did a great job finishing this play down the field. I love that guy’s heart and hustle. I didn’t give Justin Layne a miss here, since he forced Dobbins into Heyward for the cleanup. Let me know if you disagree in the comments below.

Offensively, the Steelers forced seven missed tackles against the Ravens, losing the tackling department battle at a mark of -2.

The focus will be completely on JuJu Smith-Schuster in this situation.

Of Smith-Schuster’s 67 receiving yards on Sunday, 32(!!!) came after the catch. It felt like an old-school Hines Ward-type performance against the Ravens, carrying the Steelers’ offense in the second half on the way to victory.

This forced miss by JuJu here in the third quarter really stood out to me. He takes a big shot from Ravens rookie Patrick Queen, bounces off the hit, maintains his balance and fights to the 1-yard line.

Later in the fourth quarter, JuJu splits a pair of Ravens defenders to pick up a first down before taking a big shot from Ravens safety DeShon Elliott.

Just a great job by JuJu showing toughness and situational awareness to put both hands on the ball and fight for the sticks.