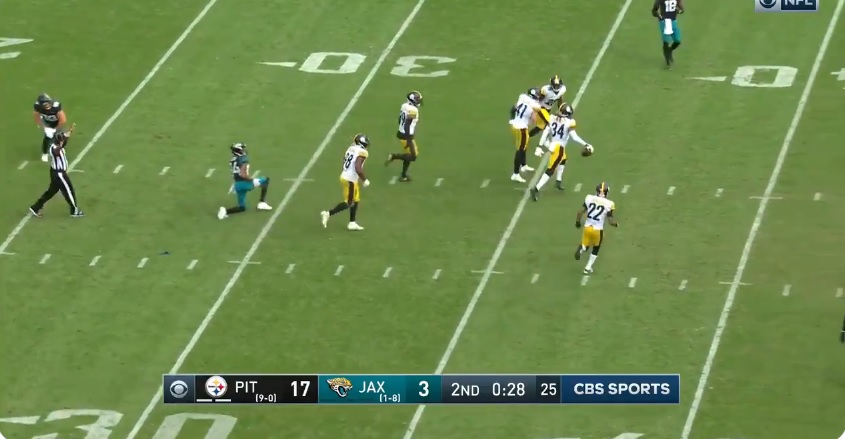 Winner and losers from the Pittsburgh Steelers 27-3 win over the Jacksonville Jaguars on Sunday.

Diontae Johnson – Ben Roethlisberger sure wasn’t shy about peppering Johnson with targets. He finished the day with 12 catches for 111 yards and made some tough grabs. That was led by his juggling catch along the left sideline in the first half, setting up a Benny Snell TD. Johnson’s stop/start ability was on display and while his hands are small and inconsistent, he can make some difficult grabs at any level of the field.

Minkah Fitzpatrick/Terrell Edmunds – We’ll have to check the last time each of the Steelers’ starting safeties had a pair of picks – each – in a game. For Edmunds, it was the second and third of his career, the first since Week 3 of his rookie season back in 2018. The second was more impressive than the first, tipping the ball to himself playing underneath zone. The first was more of a “gift” on an overthrow by Luton.

Little more “normal” for Fitzpatrick to nab one and he always seems to be on the receiving end of a tipped pass. He now has three red zone INTs since 2019.

James Conner – Run game was better though often times, the o-line was not. Conner did a great job creating space and forging his own path, including bouncing runs on the outside and beating CBs/LBs to the edge. That included a 17 yard pickup on 4th and 1 when the Jags blew up the middle of the field. His pass pro continues to be excellent too.

Pass Protection – Jacksonville had the league’s worst pass rush, a unit that got only worse when they lost top DE Josh Allen early in the second half. But still, Ben Roethlisberger wasn’t sacked and wasn’t even pressured that much despite the bevy of Jags’ third down blitzes. He’s now been sacked just twice over his last five games.

Kameron Canaday – Subtle storyline we’ve mentioned a couple times on the podcast. Canaday’s struggled with his snaps this year and it finally cost the Steelers. Low snap on a Chris Boswell 46 yard attempt that pushed wide left. Canaday’s been bailed out by the holder throughout the season. Caught up to him today.

Anthony McFarland – Only a handful of carries for McFarland but he didn’t do much with them. Blame some of that on a lack of blocking but McFarland needs to be a more decisive runner who isn’t trying to juke his way to a 50 yard touchdown each time. This isn’t Maryland anymore.