The Pittsburgh Steelers have now released their second official injury report of Week 10 ahead of their Sunday home game against the Cincinnati Bengals and the Thursday offering shows that a several players are moving in the right direction with one other going the wrong way.

The Steelers have defensive end Isaiah Buggs (ankle) moving in the right direction on Thursday as he was limited during practice after sitting out the Wednesday session. Also limited on Thursday was Steelers defensive end Tyson Alualu (knee), so it’s not guaranteed that he will ultimately play on Sunday against the Bengals. Alualu missed the team’s Week 9 game with his knee injury.

Steelers cornerback Mike Hilton (shoulder) is moving in the wrong direction as he was limited in practice after being listed as a full participant on Wednesday. It will now be interesting to see how Hilton closes out the week on Friday. Hilton has missed the last three games with his shoulder injury and head coach Mike Tomlin said on Tuesday he was hopeful that the slot cornerback might be back this weekend against the Bengals.

Things continue to look promising for Steelers fullback Derek Watt (hamstring) as he practiced fully again on Thursday. Watt, like Hilton, has missed the Steelers last three games due to injury. Watt has now practiced fully two days in a row.

Rookie running back Anthony McFarland Jr. (illness) failed to practice on Thursday so it will be interesting to see if he winds up testing positive for COVID-19. He is a new addition to the team’s injury report. 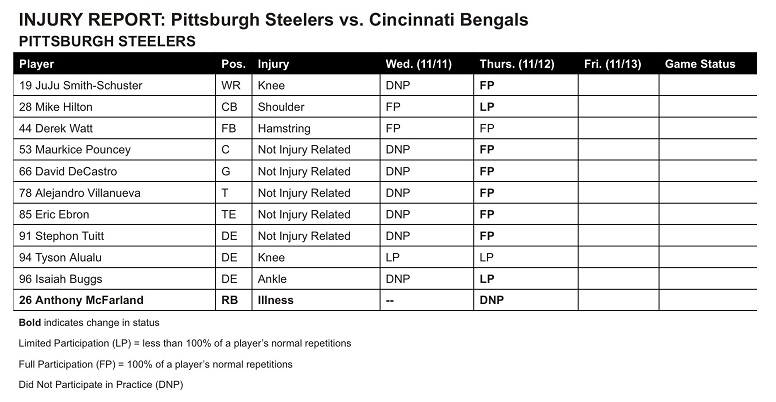