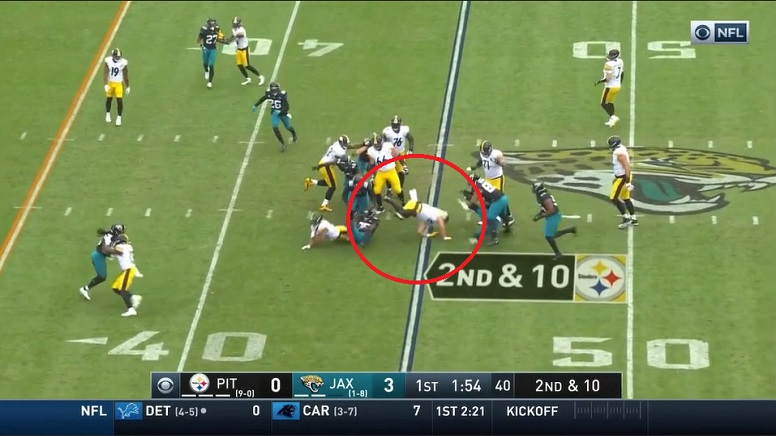 Pittsburgh Steelers second-year tight end Zach Gentry suffered a knee injury early in the team’s Sunday road win against the Jacksonville jaguars and now a report indicates that it’s not as serious as first believed.

According to Ian Rapoport of the NFL Network on Monday, tests have determined that Gentry suffered a knee sprain on Sunday. He’ll now be placed on the team’s Reserve/Injured list and must miss at least the next three games. The injury, however, is not believed to be as significant as originally feared.

Gentry only played six total offensive snaps in Sunday’s game against the Jaguars before getting injured during a running play with just under two minutes left in the first quarter. He left the game and did not return. After the game, Steelers head coach Mike Tomlin said that Gentry may have suffered a significant knee injury of some kind.

On Monday, Tomlin said that Gentry would definitely miss the team’s Thursday night game against the Baltimore Ravens and that more information was being gathered about the seriousness of the tight end’s injury.

“Zach Gentry has a significant knee injury, still waiting on clarification in terms of what that means,” Tomlin said on Monday. “It’s safe to say he will not be available this week.”

Gentry has only dressed for two games this season and he failed to register a catch in either. Last season as a rookie, Gentry, a fifth-round draft pick out of Michigan, didn’t play much at all and spent most of 2019 on the inactive list.

Gentry will likely be placed on the Steelers Reserve/Injured list on Tuesday and taking his spot on the 53-man roster will likely be tight end Vance McDonald, who is expected to be activated from the Reserve/COVID-19 list. The Steelers also currently have two tight ends on their practice squad in the form of Kevin Rader and Charles Jones, who just signed last week.