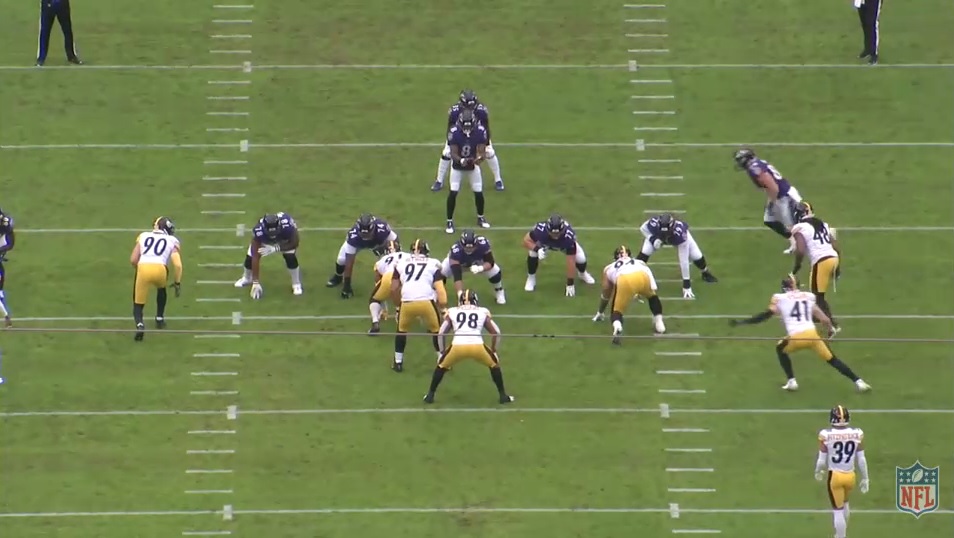 In my X Factor article leading up to Sunday’s win over the Baltimore Ravens, I zeroed in on Keith Butler and the need for him to be creative in order to stymie Lamar Jackson and company. Here’s what I wrote.

“The biggest person determining the Steelers’ success tomorrow won’t be wearing a jersey. It’s DC Keith Butler, who has to reach into his bag of tricks with a revolving gameplan at ILB to slow down Lamar Jackson and the Ravens’ potent offense…The Ravens have great coaching, brilliant minds in OC Greg Roman and DC Wink Martindale, the latter doing a tremendous job of scheming up pressure. Butler is capable of doing the same, his off-ball linebacker schemes are excellent, but he’ll have to match wits with the Ravens and solve Jackson and company to keep their offense in check. Easier said than done.”

So did Butler reach into his bag of tricks? He did. To varying levels of success, the Steelers certainly didn’t keep the Ravens “in check” for large stretches of the game, but I still respect the effort and need to give an offense as good as Baltimore different looks to deal with. Let’s check out what those things were.

The 3-5 was the most noticeable and common tweak to the Steelers’ defense Sunday. A “big” version of their base defense with three outside linebackers on the field: TJ Watt, Bud Dupree, and rookie Alex Highsmith. Two of the outside linebackers would line up on one edge (Dupree and Watt on the same side for 15 of the 19 snaps) with the other opposite. Here’s how it looked. 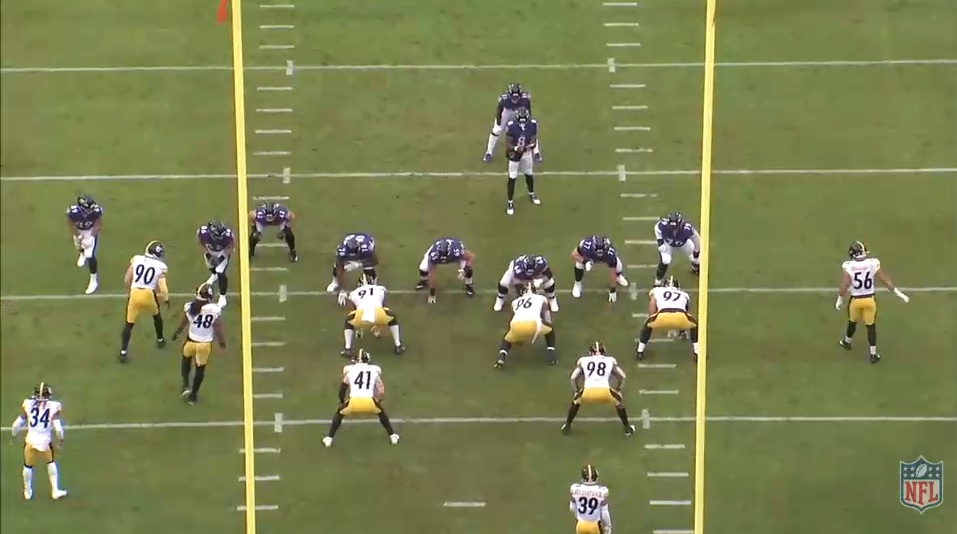 Mike Tomlin said it was a way to replace Mike Hilton, who missed his second straight game with a shoulder injury, as a way to impact the run and pass game.

“It was just another way to get another mobile player that can play the run and the pass, have more guys on their feet that protect the quarterback scrambles, and help in coverage and the run game as well”.

Bringing in an extra linebacker obviously had the focus of stopping the run. Success there was mixed, allowing 5.3 YPC, though that’s thanks to two decent gainers the Ravens picked up late in the fourth quarter as they wore down the Steelers’ tired front. This formation also defended the pass well too. Lamar Jackson dropped backed six times against it, completing just two of four passes for 14 yards and an interception, picked by Alex Highsmith who read the play and got depth in his curl/flat drop.

On the six dropbacks, Highsmith was in coverage all six times while Watt was on five of those plays. The Steelers didn’t blitz out of this look.

Jackson was sacked on one dropback, the Bud Dupree red zone forced fumble, and on another, scrambled for two yards on 3rd and five. Overall, this look was effective. Offenses haven’t seen Watt and Dupree on the same side this year and it basically created another defender in the box for the run game to try and account for. Most often, Dupree and Watt were aligned at LOLB, the Ravens’ right side, making it difficult for them to run to the strength of the formation.

Last note on this grouping. If the Ravens came out in 22 personnel (2 RB, 2 TE) with just one receiver on the field, the Steelers responded by just putting one cornerback (Joe Haden) on the field, the other removed to have Highsmith out there. If the Ravens came out in any personnel grouping with two receivers on the field, both corners (Joe Haden and Steven Nelson) were on the field with Terrell Edmunds removed. So Highsmith came on at the expense of Nelson or Edmunds, depending on if there was one or two receivers to cover.

Just used once Sunday, as you guys see above. 1-3-7 defense with seven defensive backs on the field, eight if you want to count Marcus Allen. The only traditional parts of the front seven were Cam Heyward, TJ Watt, and Bud Dupree. Sean Davis became the extra DB, seeing his first two snaps on defense this season (the other came in goal line as the third safety with Jordan Dangerfield inactive). 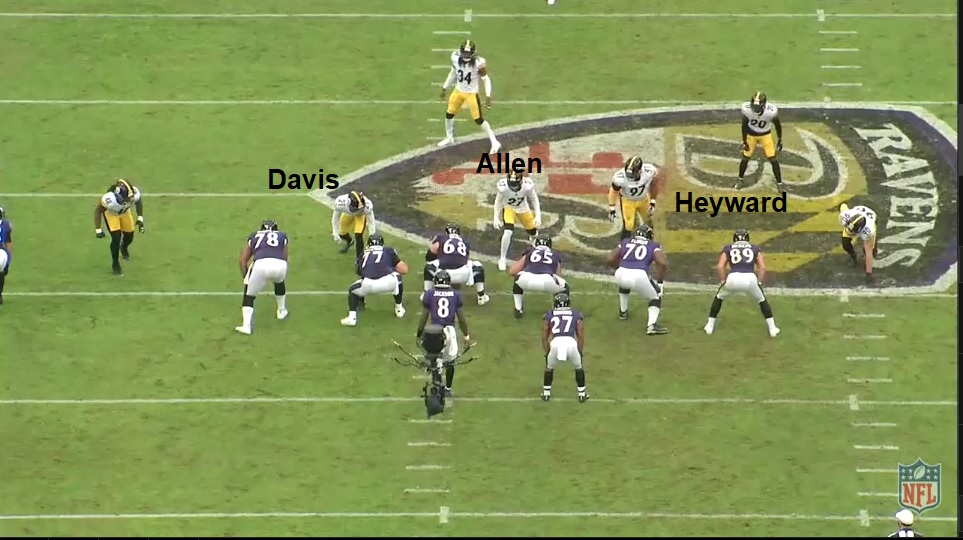 Steelers running Cover 1 Rat here. Marcus Allen is the Rat in the hole, dropping into zone coverage and reading Lamar Jackson’s eyes. Sean Davis is used as a spy to keep him in the pocket and when Jackson begins to escape left, Davis closes in and forces the throw. Unfortunately, Justin Layne got picked by the route at the top, he was a little hesitant here, and the pass was complete for a first down to Willie Snead.

Should be noted the Steelers ran this a third time but the play was negated by a Ravens’ penalty. Again, small sample size but this is the formation they used to open up the game. Base defense but Cam Heyward lined up like an off-ball linebacker alongside Robert Spillane and Vince Williams. Here’s a look at both such instances. 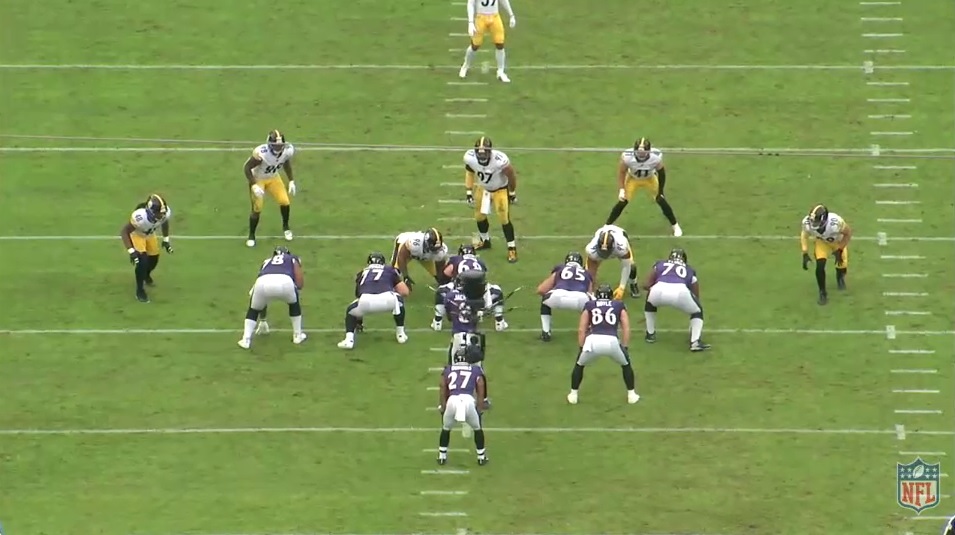 To be honest, I’m not entirely sure the goal here. Perhaps to make the look a little more unpredictable, what gap Heyward was going to hit. He also seemed to be trying to time up the snap so maybe they were using him as a wrecking ball into the line of scrimmage to try and create penetration against the Ravens’ weaker interior line. But it didn’t really work, though one run, a 14 yard gainer, was a Lamar Jackson keeper on a read/option.