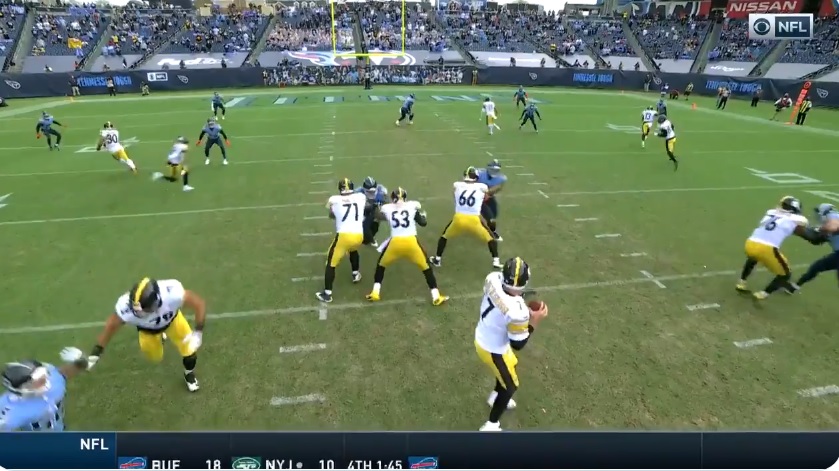 Following Alex Kozora’s lead with the defensive charting I am here to bring you some numbers about the offense.  The following data is based on our hand-done offensive charting. If there are any numbers we you’d like to see, let us know in the comments and we’ll look it up (if we track it.)

The miscellaneous column includes sacks, aborted plays, interceptions, scrambles and no plays.  The V32 personnel or victory formation consists of kneel downs at the end of half or game.

Where are passes being thrown? This chart shows where the passes are being thrown, the net yards on those passes and the average net yards per completion and per attempt. Deep passes reflect throws 15+ yards down field.

The Samuels pass yard numbers surprised me a bit but again this was how the entire offense produced not just the running back.

Where the running back runs the ball has an effect as well.  Some runners are better on the outside rather than inside.  Next we’ll look at the production by direction.

There are some interesting numbers here.  The average yardage up the middle and over the right guard, behind Maurkice Pouncey and David DeCastro is surprisingly low. Snell has been best running outside to right with 50 yards on six carries.  McFarland had one big run outside to the right but has been very good over the left guard. Conner has his best production is over the right tackle, left guard and left end

It has been a good year so far for the wide receivers. Everyone has had a chance to produce making it difficult for defenses to focus on one player.  Juju Smith-Schuster has provided the tough yards in the middle of the field. Diontae Johnson is most impressive after the catch. Chase Claypool has done a little bit of everything and James Washington is a strong deep threat.  Ray-Ray McCloud has added a speed element to the offense and deserves more snaps going forward. So let’s begin with where the receivers line up.

It’s no surprise Smith-Schuster is in the slot 88% of the time. Washington 62% and Johnson 65% are mostly used outside.  Claypool is split most evenly with 55% outside and 45% inside.

The next grid shows where the WR’s are targeted across the field.  These numbers include the targets on plays that had penalties.

Claypool (58%) and Washington (70%) are heavily targeted outside the numbers and Smith-Schuster (65%) does his work inside the numbers.  Between the hashes is a small area where Johnson isn’t often used with only 7% of his targets coming in the very middle of the field.

Eric Ebron was brought in this year to be a bigger pass threat in the offense and unlike past years they are throwing to the tight end.  He has 43 targets thus far and 3 touchdowns. The snap count for he and Vance McDonald has been pretty consisted all season with Ebron getting 61% and McDonald 39% with them both being on the field for 152 snaps (27.3%)  .

Based on tight end targets the ball gets spread around pretty well.  Across each section of the field the numbers are pretty consistent with the best average gain coming right down the middle and outside the numbers to the left.

Through eight games the Steelers have used eleven different offensive linemen at some point this season.

The Steelers usage of an extra lineman got much attention last year with the love from fans for Zach Banner. In 2019 he was used 92 times as the extra lineman in the first 8 games with 75% of time him being on the right. Through eight games in 2020 they have used the tackle eligible for 48 plays starting with Okorafor (5 times), Hawkins (43) and Dotson (1). They put the extra lineman on the right side 83.4% of the time and used one on each side once.

With the extra lineman the Steelers have run the ball 41 times for 114 net yards (2.78 yards per play) and have thrown the ball 8 times for 88 net yards with Roethlisberger going 4 of 7 for 68 yards with a defensive pass interference penalty that gained 29 yards and one intentional grounding penalty that cost 9 yards.