The Pittsburgh Steelers have now released their first injury report of Week 12 ahead of their Thursday home game against the Baltimore Ravens and the Monday offering, which is an estimated one due to the team not actually practicing, includes 15 players in total.

Of the 15 players listed on Monday, only Edmunds, Samuels and Elliott missed the team’s Sunday road game against the Jacksonville Jaguars. All three seem to be questionable to play on Thursday against the Ravens with this being a short week.

“We had a number of guys who missed the game with pre-existing injuries, guys like Trey Edmunds and guys like Jaylen Samuels,” Tomlin said on Monday. “I don’t know their status as I sit here today. I’m sure we will provide some clarity for you guys tomorrow as we get into our work week if you will.”

Three other players on the Monday injury report, Smith-Schuster, Haden and Gentry, were all injured on Sunday in Jacksonville. Tomlin also provided updates on the three on Monday.

“Zach Gentry has a significant knee injury, still waiting on clarification in terms of what that means,” Tomlin said on Monday. “It’s safe to say he will not be available this week. Some of other guys who went down in game and were able to come back or were in position to come back whether or not we chose to bring them back or not, Joe Haden and JuJu Smith-Schuster, we will let
their availability during the course of the week be our guide in terms of their availability. We don’t have a lot of physical work ahead of us this week. Wednesday is a significant day. Wednesday’s a significant day for guys who fall into that category in terms of the bumps and bruises associated with play.”

Gentry is expected to be placed on the Steelers Reserve/Injured list on Tuesday with a sprained knee.

The Steelers second injury report of Week 12 will be released after the team practices on Tuesday. 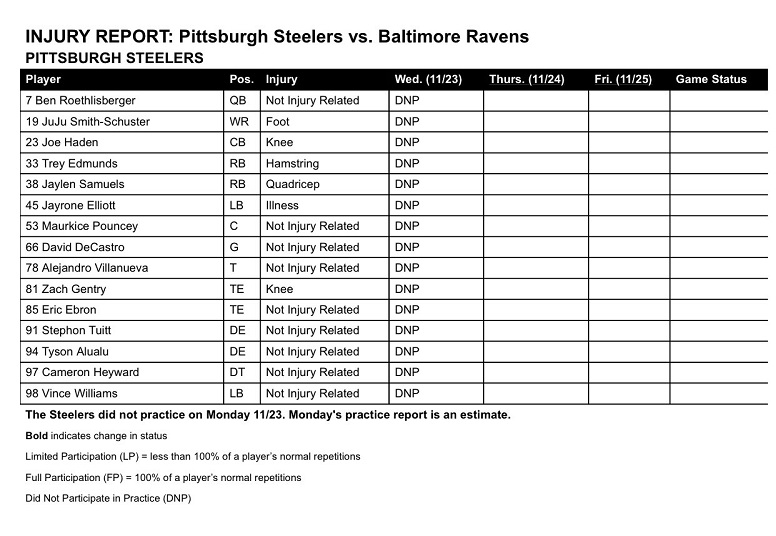