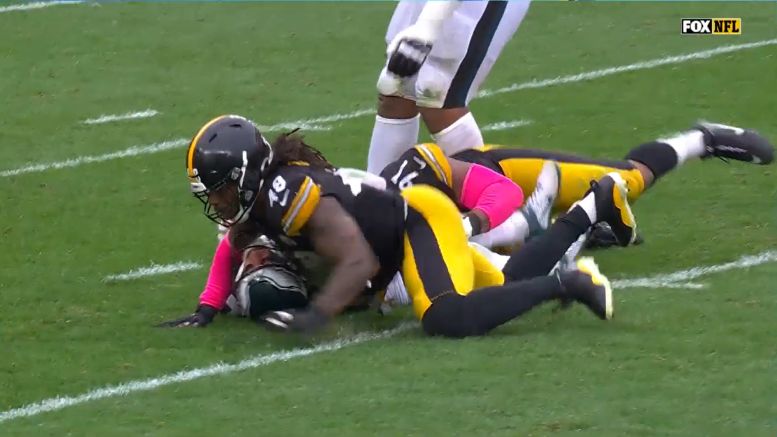 The Pittsburgh Steelers recorded four sacks on Sunday against the Baltimore Ravens, bringing their total to 30 on the season. It was the fifth time on the season that they registered at least four sacks in a single game, and the first that they managed it on the road (in three away games).

And it was their three leading defensive pressure producers who combined for all four sacks. Veteran defensive lineman Stephon Tuitt had his second two-sack game of the season, while edge defenders T.J. Watt and Bud Dupree each had one apiece on the day.

The afternoon raised all three of them to six sacks or more on the season. Tuitt and Dupree each now have exactly six sacks through seven games, while Watt has 6.5 sacks, which is tied for the fourth-most in the NFL (the others are tied for the sixth-most), and the second-most in the AFC, behind only Myles Garrett, who has nine (tied for the league lead with Aaron Donald).

There are a total of nine players in all of the NFL who have recorded six or more sacks through the first eight weeks of the 2020 season, or through their first seven games played. A full third of those players are members of the Steelers. They are the only team with more than one player in the top 10 in sacks on the season.

In fact, they are the first team since 1998, according to Steelers communications manager Michael Bertsch, to have three or more players with at least six sacks through the first seven games of the season, and just the fourth team to accomplish that since sacks became an official statistic in 1982.

Watt, Dupree and Tuitt is the first trio in the NFL to each have 6.0+ sacks through seven games since 1998 and fourth overall since 1982.#BertschyBits #HereWeGo

I did a bit of my own research, and this is in fact the first time in team history that the Steelers have ever had three players with even five sacks through the first seven games of a season. On only three occasions did they have two players reach five sacks that quickly.

The most recent occurrence was in 2008 with James Harrison and LaMarr Woodley. Joey Porter and Jason Gildon also achieved that mark in 2000. All the way back in 1983, Keith Willis and Keith Gary pulled it off as well. In the cases of 2008 and 1983, both plays had six or more sacks.

Watt recorded seven sacks in the first seven games of the 2018 season, tied for the fourth-most to begin a season along with Woodley in 2011 and Porter in 2001. His 6.5 this season is tied with Willis in 1983 for the seventh-most in team history.

In all, there have been 17 instances in team history in which a player has recorded six or more sacks through seven games. Three of those instances have occurred in 2020.