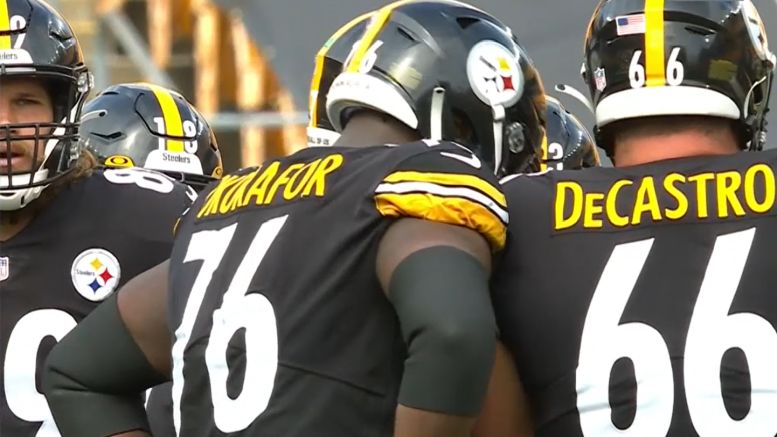 Halfway through the seasons, it’s almost hard to remember that the Pittsburgh Steelers are actually technically on their second-string right tackle. That is in part because they did not enter training camp with a settled starter at the position, but Zach Banner did win the competition and started in the opener before suffering a season-ending ACL injury late in the opening game.

Chumwuka Okorafor has played (almost) every snap since then, starting the past seven games, and the line as a whole hasn’t really missed a beat. He competed with Matt Feiler to start at right tackle last year as well and lost, but he appears to have settled in over the past two months.

Offensive line coach Shaun Sarrett earlier this week talked about the job that Okorafor is doing and about how close the training camp competition was between their two young tackles. “It did come down to the wire”, he said. “It came down to the last week”.

“Banner won that position, but Banner gets hurt. Chuks steps in. He’s done an unbelievable job”, Sarrett continued. “He’s played at a high level. He continues to play at a high level. I credit him. He saw it. He took a hold of it, and he’s got a hold of it now. It’s a position he’s going to keep right now for us. He’s doing a good job. He did a good job when [Kevin] Dotson stepped in communicating with Dotson that week. He’s just been a true professional”.

Originally selected with the second of their two third-round draft picks back in 2018, Okorafor was drafted as a true junior project out of Western Michigan, though of course they anticipated that he would be able to grow into a starting lineman.

Due to injury, he did end up starting one game during his rookie season, and he also served in the tackle-eligible role. Last season, however, Banner overtook him as the gameday active backup tackle for the purpose of being the extra blocker. When they needed a starter at right tackle, Okorafor did start that game—the only game for which he was active in all of 2019.

Now in his third season, he has positioned himself to keep the right tackle job going into next year, for which he is currently under contract, and Banner is not. He can really cement himself into the job if he has a strong second half of the season as well.