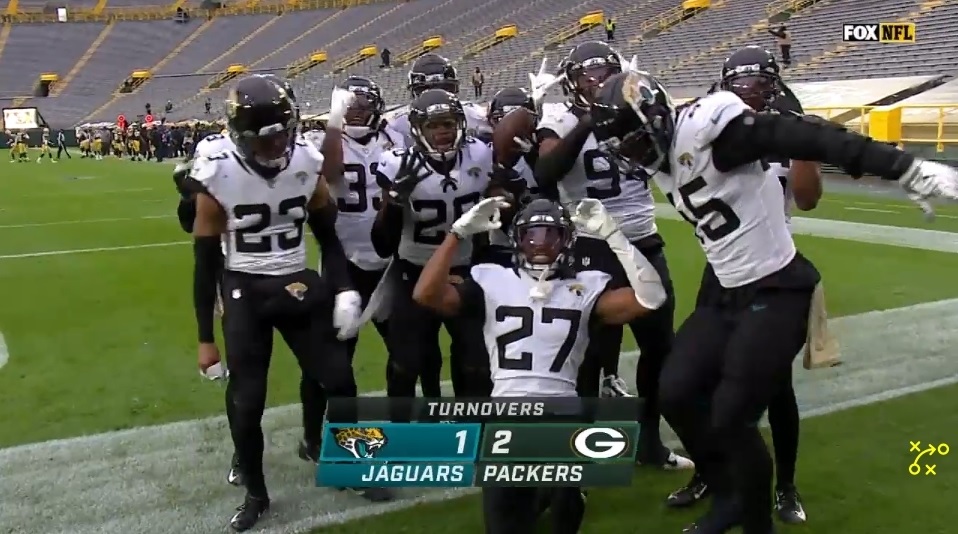 Categorize the Jaguars’ run defense as average to below. They’re allowing a lot of volume, 25th and giving up over 131 yards per game, but part of that has to do with being 1-8. Get run on plenty at the end of games. Relatively speaking, they’re in a better place, giving up 4.4 YPC, which is just about the league average. The Steelers are barely better at 4.3. They are vulnerable near the goal line though, giving up 12 scores on the season.

Like last week’s opponent Cincinnati, Jacksonville runs a 4-3 front. They definitely want to stop the run and consistently play with eight man boxes. Pittsburgh won’t have the luxury of facing two high teams that are easier to run on. Granted, this photo comes against heavier, 12 personnel but you get the idea. 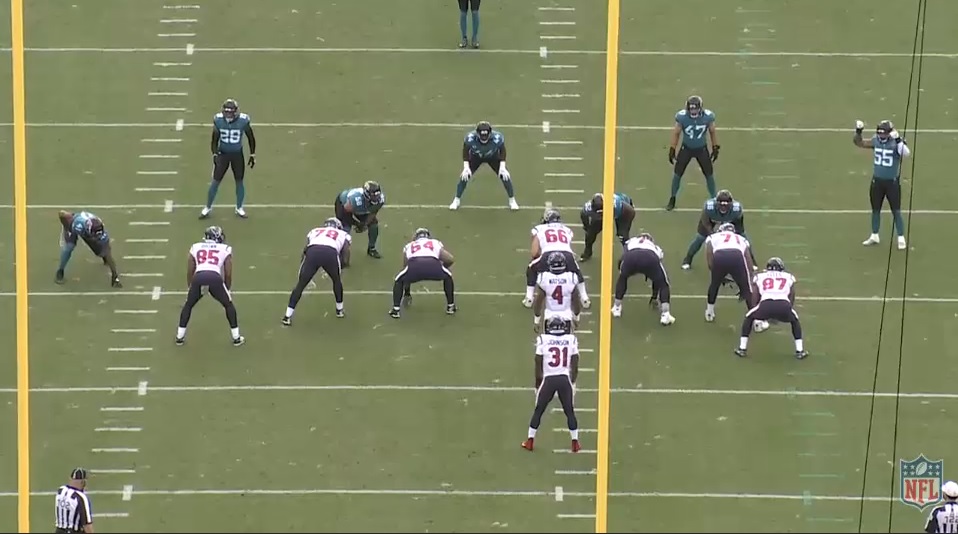 As I’ve advised in past matchups, there’s plenty of speed in the second level so trying to run on the perimeter may prove difficult. I’d keep things inside with more man blocking concepts. Some of the jet motion the Steelers like may not be as effective. Jacksonville will travel their CBs instead of displacing a LB, making the window dressing moot.

Also respect their secondary for playing the run hard and being willing to support it. Their safeties are physical and fly into the alley. Still, this is a unit allowing plenty of explosive runs. 33 of 10+ (tied for 23rd most) and eight of 20+ (tied for 24th).

MLB Joe Schobert signed with the Jags this offseason. Familiar face for Steelers’ fans after his time and great games against Pittsburgh as a member of the Cleveland Browns. Unsurprisingly, he leads the team with 72 total tackles. Myles Jack is third on the team with 60.

Some other defensive stats. Next-to-last in points per game allowed, giving up 30.1 a contest. Allowed 30+ in six of their eight games and 24+ in eight of nine. Steelers should put up big points this weekend. If they don’t, it’ll be a disappointment. Situationally though, they aren’t as bad. 19th on third down, offenses converting 42% of the time, and they have a top ten red zone defense, allowing TDs 58.3% of opposing trips. Still, they’re giving up a ton of points, in part because of all the chunk plays they allow.

Their pass defense has been the weaker part of their D. Numbers aren’t pretty. 30th in pass yards allowed per game (283.9) and tied for last in YPA allowed at a hideous 8.6. They’ve also given up 19 passing touchdowns this season, tied for 25th. Like the Cowboys or Bengals, they’re prone of giving up big plays in the pass game too. 31 completions of 20+ yards (tied for 22nd worst) and seven of 40+ yards (tied for 25th worst). Overall, this defense is one of the leakiest in giving up big plays. 39 of them, pass or run, of 20+ yards. There’s only a handful of teams who are worse.

A complete lack of pass rush isn’t helping things. The Jags are dead last in sacks with just nine of them. Nine. Across the entire defense. Their “leader” is former first round pick Josh Allen with 2.5. Only Dawuane Smoot has more than one. Allen does have 11 QB hits though so he’s getting pressure, giving him something of a Carl Lawson feel. That lack of pressure has upped their blitz rate for this 4-3 front, sending extra bodies about 30% of the time. But they’re still unable to turn that into even pressure, ranking 24th at a 21.2% clip.

The secondary, like the team, is young but has promise. There’s rookie CB CJ Henderson, a talented kid out of Florida but he won’t play this week after being placed on IR. Sidney Jones got a second chance in Jacksonville and is playing well, leading the team with two INTs and is responsible for one of the defense’s three forced fumbles.

Play a lot of Cover 1 with five man pressures against 3×1 sets and empty.

They’ll also play Cover 6 (quarter-quarter-half) against 3×1. Cover 2 to the X receiver side while matching anything vertical to the trips end.

The Jaguars defense seems like they have someone new starting each week. This season they have already lost OLB Leon Jacobs and SS Josh Jones while adding CB C.J. Henderson to the injured reserve list this week.  They are hoping to get a couple defenders back this week.

Let’s start off with a rookie on the defensive line, DaVon Hamilton. He’s the 1 tech defensive tackle who is stout against a double team, has solid burst off the snap and has solid lateral agility.  Taven Bryan is the 3 tech and he plays with good pad level, has good length and the hand strength to extend and shed blockers.  Dawuane Smoot is the strong side defensive end who can set the edge and rushes the passer using power and a solid club and will kick inside on some passing downs. On the other side is second year DE Josh Allen.  He is fun to watch. A speed DE with good burst up field can bend and good closing speed to the ball. He’s solid vs the run and will drop into coverage as well.

I’m sure he would have remembered it anyway but to be able to say your first NFL sack was of Aaron Rodgers is pretty cool.  Hamilton (52) is the 1 tech and will loop to his right on a stunt with a big hole opened up by Bryan (90) and shows solid burst and brings him down.

Allen (41) is a very good pass rusher but has worked to improve his run defense. Here he’s opposite the right tackle using good leverage to hold his ground verses the heavier opponent. He eyes the ball carrier and is able to keep his outside arm free and chase down runner for a short gain.

Also in the rotation are veteran Adam Gotsis who has good size is a physical defender and uses his hands well. K’Lavon Chaisson will come in on passing downs as another speed rusher, has good hand usage and can cover TE’s.  Daniel Ekuale plays inside usually as the 1 tech has adequate burst and speed and is solid vs double team blocks.

At linebacker they are led by Myles Jack. He’s a versatile athletic player who runs sideline to sideline, diagnoses plays well and is solid in coverage of TE’s and RB’s. Joe Schobert is the middle linebacker and is a good tackler, has solid speed and physicality but has taken a step back this year. Kamalei Correa is a recent addition coming over from Tennessee. He is solid athletically but has struggled to make strides anywhere he plays.

Aaron Lynch is a pass rusher by trade and will play outside or kick inside to rush the passer. He has good strength and adequate speeds and is a better power rusher. They hope to have Dakota Allen (foot) back this week. He filled in for Jack earlier in the year and a good motor and athleticism but is a slow processor.  Joe Giles-Harris is a two down LB, who diagnoses well and uses his hands well to keep blockers off of him and plays mostly on special teams.

They lost strong safety Josh Jones to chest injury and he was one of the top tacklers on the team. They have used three other safeties with all of them getting starts. Jarrod Wilson has started five games and is often the deep safety but will play in the slot.  Solid athlete who takes good angles to ball in the air and on the ground. Andrew Wingard has 3 starts and he will play in the box or deep. He’s better near the line of scrimmage working in short areas and likes to hit.  Daniel Thomas got his first start last week has versatility to play deep or in the box where he has solid range and will be used to blitz from the slot.

Another key loss happened this week with rookie C.J. Henderson who is their best Man coverage DB when on injured reserve with a groin injury. Sidney Jones plays opposite of Henderson can play Man or Zone and is better on plays in front of him with good change of direction to get downfield. Tre Herndon played as the Nickel and has good size and physicality, very good supporting the run and is used to blitz a couple times a game. D.J. Hayden is expected back this week (hamstring) and has experience in the slot, outside and some snaps as the deep safety. He lacks physicality in the run game and looks best in trail Man coverage. Chris Claybrooks is another rookie on the defense and is undersized with great speed with good reactions against WR screens.

Herndon (37) is with on the left side over the WR’s in the slot. He recognizes something with the motion calls it out his teammates and beats a block to the inside to make the tackle for a loss.