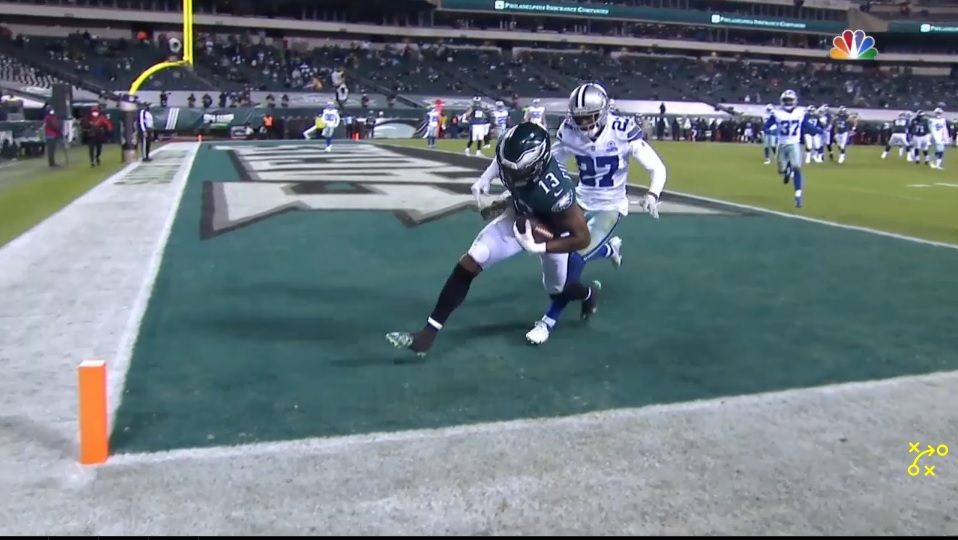 The run defense has been…bad. There’s no way around it. In these reports, I try to find the strength of the opposition, focus on the good instead of harping on the bad. But it’s hard to find the good with this unit. They’re dead last in run defense from a yards per game standpoint, 170.9 per game. The relative numbers are only slightly better. They’re allowing 5.1 yards per carry, that’s 30th, and the 11 rushing touchdowns allowed are tied for 27th most in the league. And their 37 runs of 10+ yards are tied with the Bengals for dead last, too.

They run a 3-4 defense that will shift to the front, like this over front against the two tight end personnel aligned to the right against Washington. 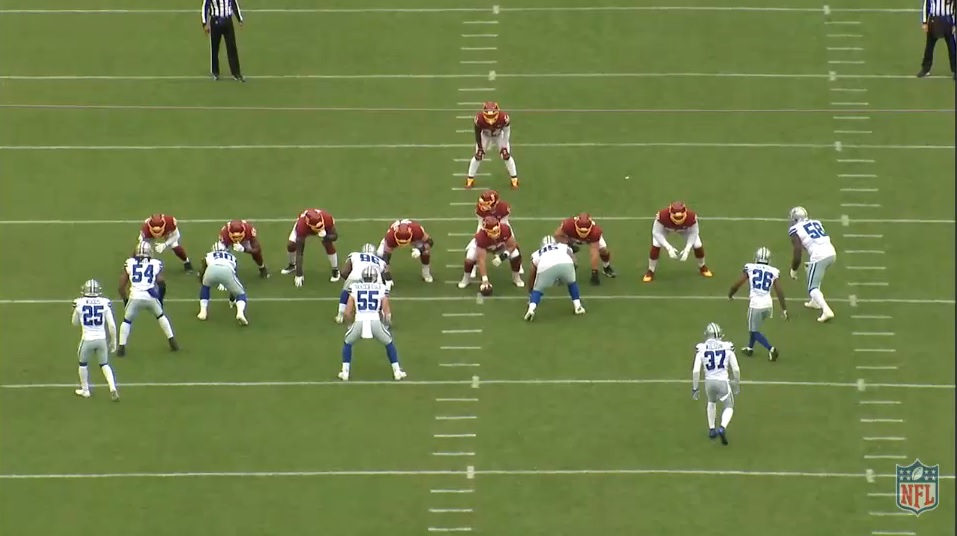 They mix between one and two gapping, capable of slanting down against zone blocks or two-gapping and activating the linebackers against man blocks. Motion has been an effective tool against them. WR jets and window dressing to freeze their linebackers.

Tackles certainly don’t always indicate ability but LB Jaylon Smith (#54) has a bunch of them. 82 total, 40 more than the closest Cowboy and tied for the most in football. But Smith has struggled mightily on tape and teams have gone after him. Might use a little more of Anthony McFarland this week. His speed will stress the slow-footed Smith. Watch Boston Scott run away from him here.

Some other stats. They’re the NFL’s worst defense in points per game, allowing a whopping 33.3 per game. Given up 20+ points in all eight of their games this season and they’ve given up 30+ in five of them (the Steelers have yet to do so all year). Their dead last -11 turnover ratio isn’t helping things. Neither is what they’re doing on third down (49.5% – 29th) or in the red zone (66.7% – 19th). They also missed a ton of tackles. Nearly eight a game.

Things are a little better in the pass game but not by much. They’ve allowed 18 passing touchdowns this year, 30th overall, while their 7.2 YPA is average. Quarterbacks aren’t completing a high percentage of passes against them, 60.6% rate is third best in the NFL (Pittsburgh is first, if you’re wondering at 57%) but that may be due to offenses taking more vertical shots against their vulnerable CBs. Dallas has given up six passes of 40+ yards this season. That’s tied for 26th most.

They are getting a decent amount of pressure though dealt DE Everson Griffin to Detroit at the trade deadline. 17 sacks this season, middle of the pack league-wide, with Aldon Smith (remember him?) leading the team with five. But #90 Demarcus Lawrence, who will see a lot of RT Chukwuma Okorafor Sunday, has been extremely impressive on tape even if he has just three sacks in eight games. They’re below average in blitz rate, trying to get home with their base rush to compensate for the secondary but are above average in pressure rate at 23.8%. That’s 12th overall.

Secondary has intercepted just three passes this year. They’ve forced only seven total turnovers, four of them coming in last weeks loss to to Philadelphia. Rookie CB Trevon Diggs had two picks that game and is regarded as a CB with great ball skills and hands. So watch out for him (#31).

Against 2×2 sets, they play a lot of man-free (Cover 1). Against 3×1, you see more quarters or Cover 3. They have a tendency to burn themselves with a lot of miscommunication and busted coverages and struggle to distribute bunch sets. In the second clip vs the Eagles, Dallas’ pressure bailed out the two receivers left open in the middle of the field.

For the third week in a row the Steelers are on the road and they will be facing a team in flux when they visit Dallas. They team recently traded one defensive lineman and cut another and are hoping to get back a starting cornerback this week. You’ll recognize some big names and a few you probably don’t know along with a good comeback story and a couple of promising rookies.

Starting up front on the defense the Cowboys have DeMarcus Lawrence who usually lines up at left defensive end. He has good quickness, awareness and uses his hands well when rushing the passer or against the run and don’t leave him unblocked on the backside, he will chase it down. Tyron Crawford is usually the 3 tech DT and has a good motor, shows good pursuit all over the field and processes well vs the run. Antwaun Woods is the 1 tech DT who has very good play strength, anchors well and plays best against the run being tough to move inside. Aldon Smith plays on the right side on the edge and his long road back to the NFL is off to a good start with 5 sacks and 35 tackles. He converts speed to power well and uses a powerful punch with his hands to keep the lineman off of him.

Here Lawrence (90) lined up over the right tackle shows off his quickness using a club/swim over the blocker and into the backfield for a tackle for a loss.

Gallimore (96) shows quickness at the snap and heavy hands landing a good punch to stun the right tackle backward allowing him to get to the running back four yards deep in the backfield.

The additional defensive lineman include former second round pick Randy Gregory who didn’t look good in the film I watched being slow at the snap and getting pushed around against the run. Dorance Armstrong is another edge rusher with good athleticism and solid agility and has solid bend when rushing the passer. Rookie Neville Gallimore is an interior defensive lineman who possesses good quickness, strong hands and plays with good pad level. Justin Hamilton plays inside and gets a good push when he times the snap right but can be moved versus double teams. Bradlee Anae has gotten a handful of defensive snaps and was a productive collegiate pass rusher that can set the edge.

The linebackers are led by Jaylon Smith and Leighton Vander Esch. Smith has double digit tackles in 5 games this year and has speed, mental processing and quick to fill gaps.  Vander Esch missed 4 games earlier in the year to another injury which has followed his career.  When healthy he’s very good at diagnosing, attacking gaps and is a physical tackler. Sean Lee is the primary backup and is a smart and reliable player but he looks like he has lost a step. Joe Thomas is a veteran linebacker who good physicality who filled in for Vander Esch earlier in the year.

Vander Esch (55) shows good balance to handle the block coming from his side and still square up the running back to make the stop.

Xavier Woods is the fee safety and he’ll be used deep in Cover 3 but plays often in the box and is better near the line of scrimmage. He has struggled against the pass allowing passes to be completed at an 83% clip so far. Donovan Wilson is the strong safety and is usually the deep safety when they play Cover 1. He is good in run support and will attack downhill with speed and is a physical tackler. Steven Parker is the key backup at safety. He’s a former undrafted free agent and has very good size and length with good burst to the ball and aggressiveness.

This is a clip of Wilson (37) coming downhill in a hurry to make a stop against the run at the line of scrimmage.

The Cowboys hope to get Chidobe Awuzie back this week who hasn’t played since week 3. A quick twitched DB with good size who can play in Man or Zone equally and is a good tackler. Rookie Trevon Diggs plays on the right side and is a physical defender with good length and competitiveness who is best in Press coverage. Anthony Brown has been starting on the left side who looks better in Zone and show good quickness to close on the ball in his area.  Jourdan Lewis is the nickel back and likes to get in receivers faces, has good foot quickness and is productive when blitzing (4 sacks in 2019). Saivion Smith is a raw, developmental player with solid ball skills and is a strong tackler.

On this play Diggs (27) is in off coverage and shows good mental processing to react to the WR and shows of his speed and length to get the pass break up.