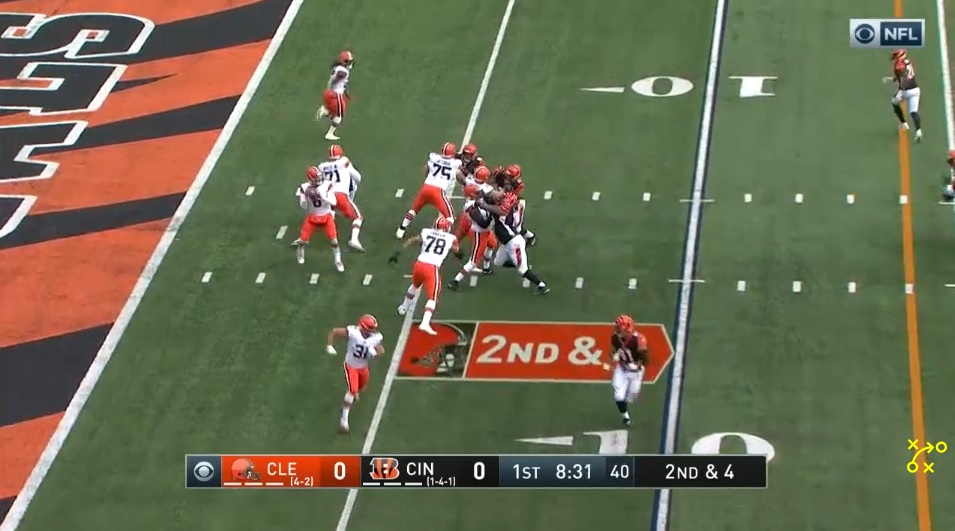 The run defense has struggled, just as we wrote about in our Cowboys’ report a week ago (though that didn’t translate into a rushing bonanza for the Steelers, clearly). They’re allowing 144 yards per game on the ground (29th) and even uglier on a per-carry basis. 5.2 per tote, dead last in football.

Things have calmed down a little as of late but they’ve allowed 150+ yards in five of their eight games this season. Three of those came in the first three games of the year.

As has been the case for decades now, the Bengals are a 4-3 front. New faces with this group, especially with Carlos Dunlap traded to Seattle, but it’s the same type of front. Run-stuff one tech, quick three tech, couple of big defensive ends. Typically in these matchups, the Steelers have employed more six offensive linemen to help block that defensive end with an extra tackle than a tight end, especially with Vance McDonald out this weekend.

Overall, the Bengals have struggled to win at the point of attack. Guys getting pushed back, difficulties in shedding blocks, and finishing the play. Lot of yards after contact versus this group.

I’d use plenty of power with James Conner and Benny Snell this weekend and hit this group in the mouth.

These run defense woes is one reason why the safeties are so involved. Feels like every season, their safeties are pacing the group in tackles. Starting safeties Vonn Bell (58) and Jessie Bates (57) are tops on this unit.

It’s been a below average unit in a lot of categories. Below average in yards per game allowed and YPA, though that’s led to an above average completion % against. QBs sitting at 63.2%, 7th best of any defense. Usually get that for teams who are getting attacked vertical and the Bengals’ are. Allowed 34 passes of 20+ yards, which is 30th.

A lack of pressure isn’t helping. Just 11 sacks this season, still somehow good enough for being tied for 25th in the league. Carl Lawson is the only player with more than one sack on the year with 3.5. He’s been almost their sole source of pressure. 13 QB hits predictably lead the team – the next closest is Sam Hubbard with three. And Lawson is the lone Bengal with a forced fumble, popping the ball out once this season.

Total lack of pressure, 31st in football. Blitz rate is about average, which isn’t helping things considering the front four isn’t getting the job done. QBs have all day to throw versus this unit.

Like past years, they rotate linebackers out based on coverages and groupings. Rookie Logan Wilson (#55) plays in nickel and in obvious pass moments. He’s tied with Bates for the team lead with a pair of interceptions. The Bengals are doing well this year with eight of them by six different players.

Cover 1 and Cover 3 are the base coverages, rolling safeties into the box to support the run. One reason why their safeties have so many tackles. Late in the half or on 3rd and long, expect 2 man. Two deep shell with man coverage underneath, playing trail technique and taking away in-breaking routes. Best way to beat that is with out-breaking routes.

The Bengals come to Pittsburgh and there are a lot of new faces on the defense.  They recently traded away Carlos Dunlap and have D.J. Reader and Trae Waynes on injured reserve so they have a lot of youth in their defense. That could be a good thing for Ben Roethlisberger and the Steelers offense.  Let’s take a look at the individuals on the defense.

Starting up front with Reader out Christian Covington has been starting at defensive tackle. He has a good motor and anchor making him tough to move and has good play strength and strong hands to yank lineman out of his way. Veteran Mike Daniels also plays inside has good play strength and a solid bull rush. He’ll play over they center when they play their tite front. Margus Hunt was with New Orleans earlier in the year.  He has very good length but is a bit stiff moving laterally.  He was also put on the Covid list so he may not play this week. Xavier Williams has solid agility and uses his hands well but doesn’t stay square and can be moved on outside Zone runs.  Geno Atkins is unhappy with his role playing less than 20 snaps a game but he still plays with good leverage, leg drive and quickness.

Covington (99) is shaded inside the left tackle in the Bengals tite front.  He uses strong hands and very good strength to yank the blocker out of his way and makes the tackle for a short gain.

At defensive end Sam Hubbard is expected back after dealing with an elbow injury.  He plays on the strong side uses his hands well, can shed blocks and has good awareness from the backside. Carl Lawson starts on the weak side and leads the team with 3.5 sacks. No one else on the team has more than one. He has good quickness at the snap and uses his hands well and kicks inside on sub packages. He likes to use a double chop/rip when coming around the edge. Amani Bledsoe and Khalid Kareem have seen their snap counts go up in recent weeks after the departure of Dunlap. Bledsoe lacks length and plays too high but can set the edge and has good strength. Kareem is an edge setter and better against the run but uses his length and strength well on power rushes.

Lawson (58, left side of the screen) uses quickness to get up field, will stab with his left arm and grab the LT by the shoulder pad under his arm and shove him to the right to get the sack. He used this move twice for sacks against Philadelphia.

The linebacker corps is loaded with younger players excluding veteran Josh Bynes. The former Raven has solid athleticism and willing to fill in gaps but will get caught in the traffic moving laterally. Germaine Pratt has solid athleticism and is a strong tackler but has tight hips and isn’t strong in coverage. Rookie Logan Wilson was a strong at diagnosing in college, is a strong tackler and good in coverage. He plays inside in nickel and they’ll also use him on the edge. Akeem Davis-Gaither is a very good athlete with speed and good motor and is good against screens.

Pratt (57) is communicating pre snap and then reads the pullers, steps up in the hole and makes a stop for no gain.

At safety the Bengals feature Jessie Bates III and Vonn Bell.  Bates is the free safety and will be used often in the deep middle of the field and has good range (10 pass breakups) and is a strong tackler. Bell is the strong safety and leading tackler and plays with physicality. He’ll play in the box and is used to cover TE’s and is active against the run. He does a little bit of everything including blitz. Former starter Shawn Williams is used primarily as the dime linebacker now, better in short areas near the line of scrimmage. Brandon Wilson is a special teamer and return man but will occasionally get some snaps in dime personnel.

The Bengals blitz the right corner and Bell (24) splits to the outside to take his area in Zone coverage. He’ll close on the receiver and knock the ball away.

William Jackson III is the Bengals best corner and plays on the right side.  He has good feet to mirror receivers, acceleration to close on the ball and is a willing defender against the run. LeShaun Sims starts on the other side has good size, looks best in Off/Trail Man coverages and is a willing tackler.  Mackensie Alexander is the primary slot corner and has good quickness and speed, is good in Man coverage and gets downhill versus screens quickly. Darius Philips can play outside or in the slot has fluid hips and good ball skills leading the corners in passes defensed with five.

Jackson (22, bottom of the screen) is going to reach over the shoulder of the receiver to knock the ball away without interfering.