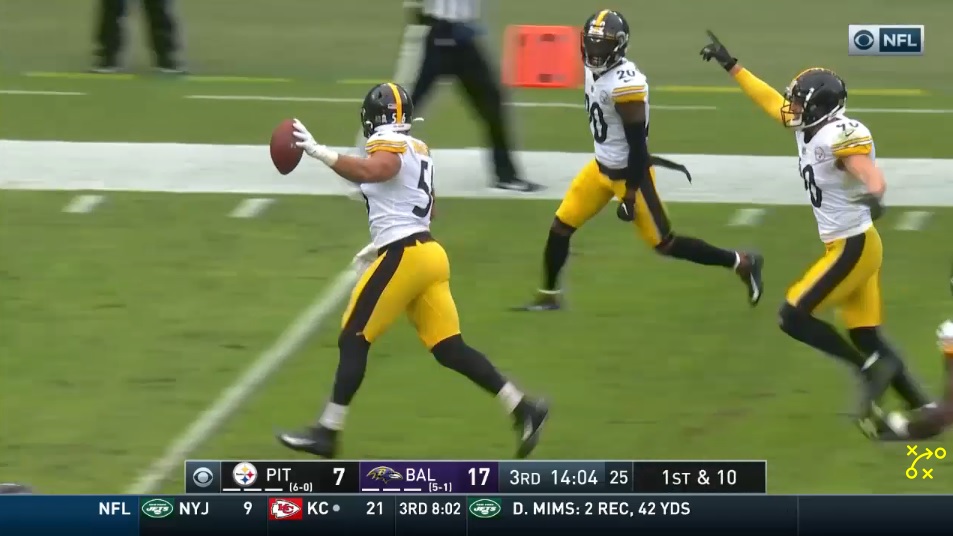 He finished with five receptions and the biggest was for the go ahead TD. It was his 5th receiving TD and 7th overall. His first reception started off really well using an outside press to get space to the inside and used his hands very well to swipe the hands of the DB and keep them off of him but unfortunately he fumbled (his 3rd this year). His release versus Press coverage was really good overall. He showed good physicality as a blocker against defensive backs and has shown a knack for pushing their buttons.  I’d like to see him sustain better on the blocks going forward.

He had two deep passes come his way with one being slightly underthrown and the other drawing a defensive pass interference call.  On the play before his TD he executed a perfect rub route to get Juju Smith-Schuster open.

On special teams he was on kick return and had a good block to allow Ray-Ray McCloud to get to the edge. He also was the gunner on the final punt of the game and easily won the rep to force a fair catch.

We’ve seen Claypool (11) mess with DB’s before and here he gives Jimmy Smith (22) a little extra push and for split second it looks like Smith wants to take swing at him but they hug it out in the end.

Here is the Claypool rub route. He’s stacked in front of JuJu and will release to the inside and turn to box out the defender giving JuJu a clear release. He puts his hands out like he ready for the ball to make it not look like offensive pass interference.

It was a busy day for Highsmith with 25 snaps on defense nearly doubling his previous high of 13. The high number of snaps was due to the Steelers using five linebackers on the field at the same time. He responded well playing assignment sound football.  Whether it was setting the edge, crashing the QB at the mesh point or playing in coverage he was where he needed to be and he executed his role.

The interception was really well played reading the routes in front and behind him while reading the QB and getting enough depth to high point he ball.  He has played a lot more in coverage the past two weeks and has looked much more comfortable than I expected. He attacks WR screens well, shows awareness in Zone and has shown solid agility in Man Coverage.

On special teams he executed very good double team blocks with Jaylen Samuels on the two returned kicks. On punt return I see potential for a punt block from him so I wanted to put that on your radar.

Highsmith (56) will line up inside and outside on punt block but when he is outside he likes to us a speed rush and then jump inside the blocker.  He’s come close a couple times this year so hopefully the blocked punt is coming.

Blocking on punts can be tough when you’re facing someone like Calais Campbell (93).  Baltimore was protecting against a fake so they had some of their defense out there.  Highsmith (second from the left) ducks his head just a bit and the veteran used a club/arm over to shove him aside.  Lesson learned for the young linebacker.

It was a quiet day for McFarland with James Conner getting the lion’s share of snaps for the running backs.  McFarland got in for one play and got the carry, showed a nice cut to the outside and had some space to the outside but stumbled untouched to the ground. He seemed once again like his mind was working faster than his body could handle.  The more reps he gets the more likely the mind and body will sync up.

For the second week in a row Dotson did not receive any offensive snaps.  He was in on the field goal team lined up as the right guard.

Antoine Brooks Jr. (6th Round) – Did Not Play

Brooks was added to the active roster and dressed for the game but did not enter the game.

Pierre did his usual duties on special team and was not involved in any tackles.  He is really fun to watch on punt cover as the gunner. He has continued to show growth and is showing creativity beating the blocker to get downfield.  He mixes speed, physicality and impressive change of direction using stop/starts to get the blocker off balance. On one kick cover he displayed good aggressiveness taking out the lead blocker to attempt to clog the lane.