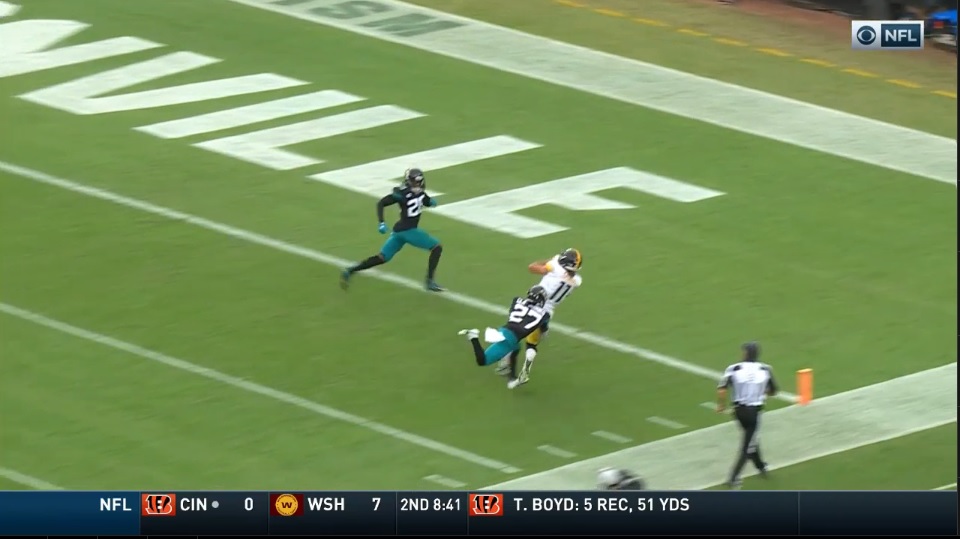 Ten touchdowns in ten games is an impressive accomplishment at any level but doing it as a rookie in the NFL is pretty impressive. He was limited to four receptions this week but had two other targets that led to gained yardage. His first two receptions were on Out routes including a pretty toe tap on the sideline.  He wasn’t targeted on any slant routes but he uses play strength and his hands really well on those to clear through the defender. His lone catch in the second half showcased his ability to adjust to a ball behind him and make a tough catch.

I counted 15 deep routes (Go, Corner, Post) in the game and he was targeted on four of them. The first looked like a possible miscommunication with Ben Roethlisberger throwing it outside and Claypool being inside. The one completion was the touchdown and he used speed to get over the top of a very fast DB. Two other deep routes had defensive pass interference penalties to move the ball downfield. The other target went through his hands and I’m betting he would say he should have caught it.

The two special teams snaps were on kick return and the first was the onside kick and the second was a touchback.

Highsmith did a solid job setting the edge against the run and could work on getting disengaged a little quicker.  His first pass rush was a bull rush but his hands slipped outside the frame of the blocker. His third pass rush he came free to help force an early throw on a screen pass. On the first interception by Minkah Fitzpatrick the ball was deflected by Tyson Alualu and if he didn’t get it Highsmith may have as he was right in the same passing lane getting his hands up.  He was out in front of Fitzpatrick on the return as well trying to clear the way.

His tried a few bull rushes but didn’t get much movement. His two tackles came late in the game dropping into coverage and hustling to the sideline to make both tackles.  Love to see that effort. He looked better this week on punt return doing a much better job of sustaining his block. He also showed good reactions on the onside kick not leaving his position too soon and reacting quickly to the ball.

Okay this clip isn’t exciting but I wanted to show his effort and improvement blocking on punt return. Highsmith (56) will line up over 85 but his job is to block 43.  He locks on early and sustains for about 15 yards before releasing.

McFarland has a ton of athletic ability but there is more to being a good running back than just athleticism. The offensive line hasn’t been good recently but McFarland must learn to help them and himself by setting up his blocks. He starts every play off in fourth gear and he need to throttle down so he can see the play develop. He is at top speed right away and needs to save that for when he hits the hole but he has to find it first.

He had three touches and earned only three yards and it could have at least been a little bit better. He was split wide on one play and showed good acceleration on Go route. They’ve put him out there a handful of times and hopefully are setting him up for a deep pass play down the road.

On this play, McFarland (26) takes the hand off and is moving too fast to see the play develop. If he presses to the outside toward Matt Feiler (71) that will move the linebacker (47) left and help David DeCastro (66) get to his block to kick him outside and then he can cut up inside between Feiler and Maurkice Pouncey (53) and get at least a couple yards.

On this play if he heads toward the A gap between Feiler and Pouncey that will move the linebacker 47 and the man Feiler is blocking (92) to his right and then he can cut left into the B gap inside of Alejandro Villanueva (78).

Davis got most of his reps late in the game but showed good hustle on a WR screen.  He’s always working hard but the results aren’t there yet and that’s okay.

He got several chances to work in pass rush with some of the starters. He got to be the penetrator on a stunt with Bud Dupree but was a little out of control and didn’t occupy the blockers enough for Dupree to get around. He also got to loop to the outside on a stunt but didn’t provide any pressure around the edge.

Pass rushing isn’t his strong suit but he can work to improve starting with how he uses his hands against blockers.  Some improvement on chops, swipes and counters can help him put more stress on lineman going forward.

Like last week, Pierre got some snaps on defense and this week made a contribution right away.  While playing in Off coverage the Jaguars threw a quick pass out to a receiver and Pierre closed the gap in a hurry to make a clean tackle for a loss.  The other three snaps were uneventful for him with two Zone coverage reps and one in Man coverage on a crossing route.

On the first punt return he and Cam Sutton allowed the gunner to split them and get to the returner. He plays much faster than his 40 time running past blockers as the gunner and on one punt return he stumbled at the line but was able to catch up to and get a block on his man. On one punt the Jaguars used three different players to block him covering a punt. He was credited with one special team tackle when the punt returner went to the ground to catch the ball and he touched him down.

Here is Pierre’s (42) tackle on defense. You can see how quickly he closes on the ball and makes the immediate tackle.