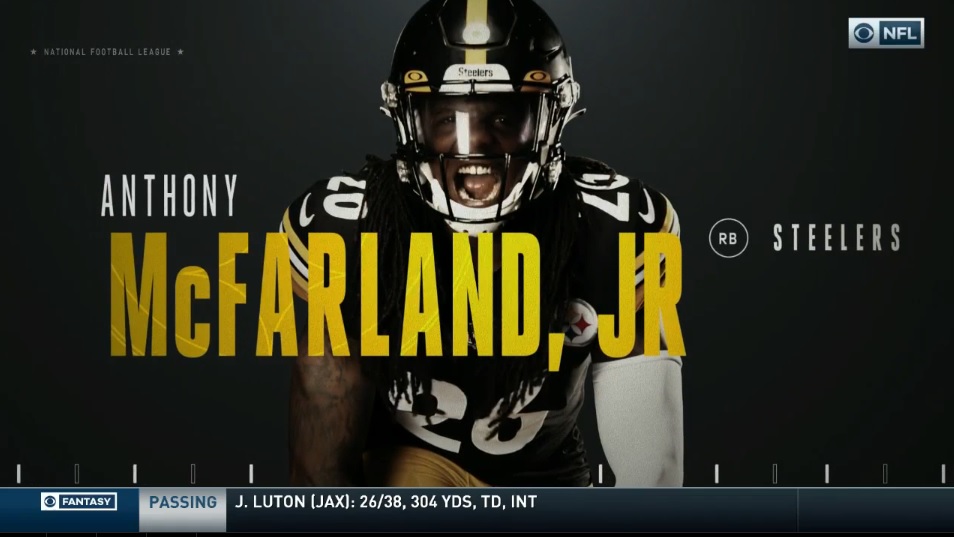 His first target was a deep ball down the right side where he got pushed but had a chance and probably should have caught the ball.  He was using physicality to separate on shorter routes and hesitation and acceleration go get on top of DB’s on deeper routes.  The out route was open all day for him and he made a couple nice catches adjusting behind on one and up on another.

The Steelers ran 01 personnel for the majority of the second half and he had mixed results. He made a big conversion on third down coming out of their own end zone but missed a couple balls that he had a chance to catch. His lone carry had a chance to ice the game by getting a first down but he started his slide early and then decided he won’t slide anymore.

His best contribution on special teams was forcing the returner to cut back limiting his return. The first half of his rookie year has been better than expected with 31 receptions for 444 yards and 5 touchdowns and 7 carries for 25 yards and 2 TD’s. Of 38 touches this year, 23 have resulted in first downs.

Highsmith continues to impress week over week and looks really comfortable playing on either side of the defense. On his first snap of the game he set the edge, shed the tight end and made the tackle. After his first career interception last week he notched his first career sack this week. He showed good balance to take the punch from the offensive lineman, cut back inside and get the QB. A lot of his rushes look similar with the hop to the outside and chop of the hands. I’d like to see him to expand on that in the second half of the season.

He had three snaps in coverage (2 Zone, 1 Man) and again did a nice job matched up on WR in the slot displaying quickness to flip his hips and accelerate with the WR. On special teams he had a nice double team block with Ola Adeniyi on the first kick return and had a tackle on kick coverage shedding a blocker and making the stop.

Like Claypool he has impressed so far and is showing good performances week to week with 15 total tackles, 1 sack and an interception.

Highsmith (56) in coverage in the slot he is reading the two receivers to the outside. He has the in breaking route and shows good athleticism to stay with the WR.

It was five touches in eight offensive snaps for McFarland this week.  The running game did not start off well with two carries garnering one yard on short yardage carries but the final carry he got some blocks and got 6 yards.  Physicality is not his strong suit and is usually stopped at first contact with only one broken tackle so far in his rookie year.

He recorded two receptions this week with one coming on a check release to the right and the other being a quick out from the slot on the left in which he adjusted nicely to a low throw.  They’re setting him up for more as you’ll see in the video below. In six active games this season he has 17 carries for 64 yards and 4 receptions for 28 yards.

Here is the play with McFarland (26) running a quick out in the slot. The outside receiver runs a route to the inside taking the corner and safety with him. That puts McFarland one on one with a linebacker with no help over the top. Look for Pittsburgh to run an out and up of this formation at some point.

Dotson’s snaps came on the field goal team and he was the victim on the blocked extra point.  The Cowboys sent one man low to Dotson’s right to get him to stay low while the other defender jumped over inside of him. Fixes are sure to be coming for the field goal team.

Dotson has been really good in his 3 games on offense including two starts.  He fits their offense well and will be a valuable piece of the offensive line for a long time.

Brooks got the call up for the second week and he got his first chance to get on the field playing on the kick cover team.  He showed good hustle on all kicks and showed very good effort to attempt to work through a double team block and it worked well enough to clog the lane and allow Highsmith to make his tackle.  Welcome to the NFL, Antoine.

Davis had been inactive every week this year but jumped into the defensive line rotation this week and played well.  He lined up from the 0 tech over the center out to the 4 tech at left defensive end and contributed valuable snaps to give others a breather.

He showed solid quickness and hand usage overall and flowed well versus Zone runs. His very first snap he was able to slide with the blocker, shove him out of the way and make a tackle going to his right. He showed a solid hand swipe rushing the passer and a solid push on bull rush.  His effort was high on all his reps and he had solid recognition to make the tackle on a screen pass.  He also added one snap defending on an extra point.

A good first game for Davis and congratulation to him for getting his first NFL game experience.

Here is the play against the screen by Davis (73). He shows good recognition of the screen, sees the fake to his left and then is able to get out to his right to make the tackle.

Pierre had some interesting highlights in this game. On the punt return with the throwback to the left he was on the far side of the field away from the play. He had to fight through a double team and pushed one blocker to the ground and tumbled over him. He got back up and the other blocker grabbed him by the shoulders and threw him down like a sack of potatoes. Didn’t look legal to me but there obviously was no call.

He recorded a tackle on a punt return and showed good effort to beat the blockers. He then broke down to get ready to engage the returner and got an assist from Adeniyi who pushed him from behind into the returner. There was a quick snap on a punt by Dallas late in the game and Pierre wasn’t ready and got beat easily as his man made the immediate tackle.

Pierre has been a nice free agent find for the Steelers and has played well on three phases of the special teams (he doesn’t play on kick return). Through eight games he has 5 special team tackles.

Here is the punt cover by Pierre (42, top of screen) where he gets a helpful push from Adeniyi (92) to make the tackle.

Inactive for Week 5 – None