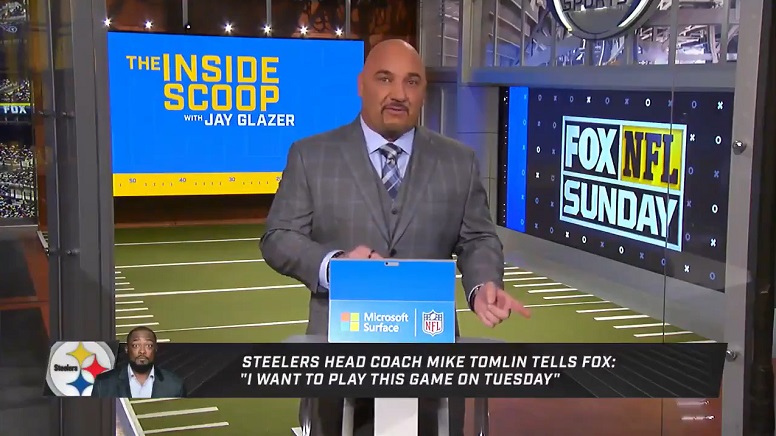 With there now being right at around 30 minutes until the Sunday Week 12 games get underway, the Pittsburgh Steelers Tuesday night game against the Baltimore Ravens is still scheduled to be played. FOX NFL insider Jay Glazer gave a report on the status of that Tuesday night game during a brief pregame show appearance and included in that was an update on the plans the Ravens currently have.

“They have every intention right now of playing Tuesday,” Glazer said. “I think the only way that game gets moved again or canceled is if there’s a separate outbreak inside the Ravens. But as of right now, I can tell you this; the Ravens are actually planning for their players to get back in-person tonight, six o’clock, to go through conditioning and workout at the facility for the first time since Tuesday. They’re going to have a walk-through tomorrow.”

The Ravens had two more players, tight end Mark Andrews and linebacker Matthew Judon, both returned positive COVID-19 tests on Sunday morning, according to several reports. They are both expected to be placed on the Ravens long Reserve/COVID-19 list later Sunday.

As for the Steelers, who have placed four players on their Reserve/COVID-19 list the last two days, in addition to having two coaches tests positive for the virus, they returned to practice on Sunday. Glazer says Steelers head coach Mike Tomlin essentially gave an all clear to him Sunday morning.

“And on the other side, I talked to Pittsburgh coach Mike Tomlin this morning and he said he has no new positive tests from yesterday’s batch and said, ‘Look, we plan to and want to play that game on Tuesday,'” Glazer reported.

So, there you go. We’ll see what all transpires on Sunday afternoon and on Monday. For now, however, the Steelers-Ravens Tuesday night game is still on.

The inside story on the @Ravens Covid-19 outbreak, updates on the #Ravens vs. @Steelers game, and the @Broncos QB situation. @NFLonFox #NFL #Covid #updates #NFLNews pic.twitter.com/7Cc0u3Tj2j