Now that our collective heart attack has ended and the Pittsburgh Steelers have moved to 8-0 for the first time in franchise history, let’s take a dive into some of the advanced metrics from both sides of the ball.

It isn’t that surprising that many Steelers fans were quite confident in this game, as the Dallas Cowboys were forced to start Garrett Gilbert. Moreover, those who own Ezekiel Elliott in fantasy football were probably prepared for a monster day, as Cowboys coach Mike McCarthy was likely to have Gilbert hand the ball off to Elliott over and over again.

That is not what quite played out. 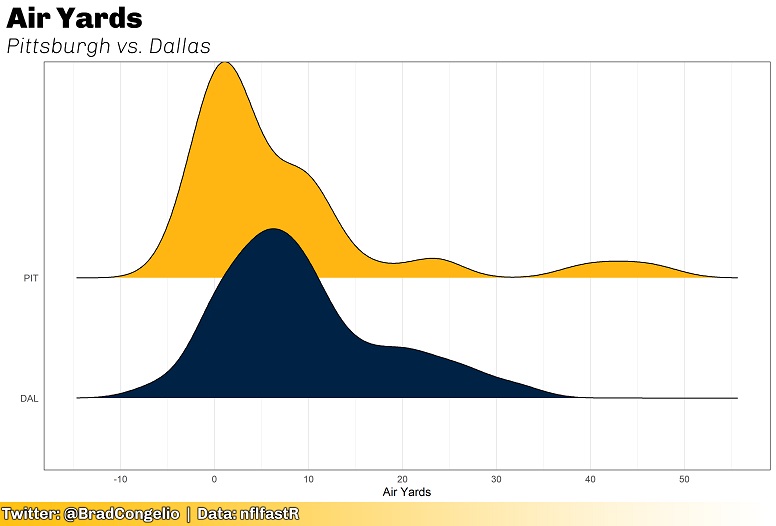 In the above graph, we are taking a look at air yards, which is the total distance the football is thrown beyond the line of scrimmage until the point of reception. This means that air yards does not take into consideration the yards after catch statistic. Because of this, the air yards metric is often argued to be a better gauge of overall quarterback performance as it differentiates between the two core aspects of a pass play: the pass itself and the yardage after the reception. In other words, it measures the true contribution of a QB’s part in a passing play.

That said, the air yards graph from Sunday’s contest indicates that the Cowboys were quite comfortable in letting Gilbert air the ball out. While Roethlisberger did have some deep receptions, as seen in the far-right of his graph, the Cowboys – on average – completed more passes downfield than the Steelers.

Air yards can only provide so much context, however. In order to gauge the value of each pass thrown, we can examine the expected points added (EPA) per pass through a sina plot.

By viewing each pass through the context of EPA, we allow an adjustment for the argument that not every yard in the game of football is created equal. When viewed this way, we can see that the Steelers, perhaps, had a bit more consistency across the board with the passing game. Indeed, Gilbert and the Cowboys had some downright disastrous pass plays pushing a negative-4 EPA, while Roethlisberger and the Steelers had nothing that neared that poor of an outcome.

On the other end of the spectrum, the Steelers achieved a 2+ EPA at a slightly higher clip than the Cowboys, arguing that the deep passes that Roethlisberger did complete down the field ultimately resulted in a larger impact on the game than Gilbert’s deeper passes.

This seems to play out in the numbers, as well. According to Pro Football Focus, Roethlisberger attempted five deep passes – counted as those that traveled 20+ yards through the air – against Gilbert’s six deep attempts. However, Roethlisberger’s adjusted percentage on these deep balls is 10-percent higher than Gilberts, at 60-percent.

All in all, I would argue that Roethlisberger won the quarterback matchup by providing a more consistent and efficient passing attack than Gilbert. 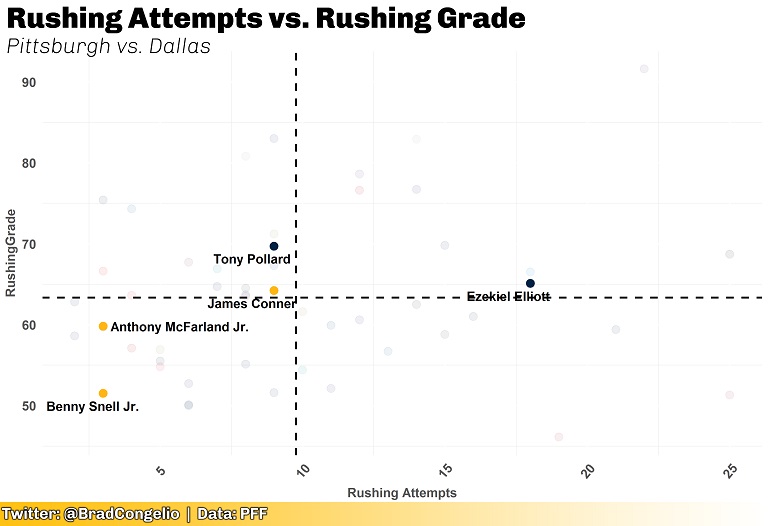 Neither team was truly able to get the running game going. Yes, the Cowboys outgained the Steelers on the ground with 144 yards to Pittsburgh’s paltry 46-yard performance. But each of those numbers was an absolute uphill climb for both units, with no running back on either team putting together a solid performance. In fact, it was Tony Pollard – with a workload of just nine snaps despite Elliott nursing an injury – that received the best grade from PFF. That said, both James Conner and Elliott still ranked just above the league average for the week, so things could certainly be worse for both units. 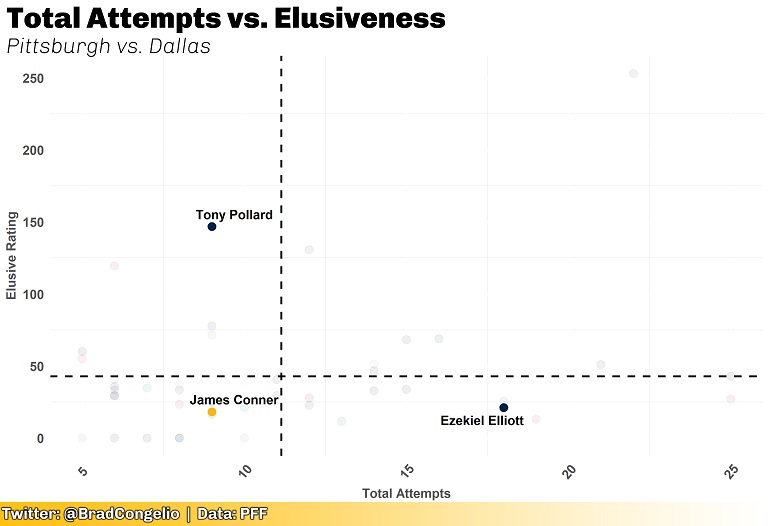 Looking at PFF’s ranking for running back elusiveness certainly explains why Pollard was graded higher than both starting backs. In short, elusiveness explores a running back’s output independent of the offensive line blocking in front of him. In Sunday’s game, Pollard was the second-most elusive running back in the NFL – Minnesota’s Dalvin Cook averaged nearly 8-yards after contact on 22 attempts which skyrocketed his elusiveness grade.

In Pollard’s case, he averaged nearly 5-yards after contact on each of his nine carries. That kind of productivity independent of his offensive line certainly aided in his higher rating compared to both Conner and Elliott.

Since Pollard’s grading was independent of blocking, how did both offensive lines ultimately perform? 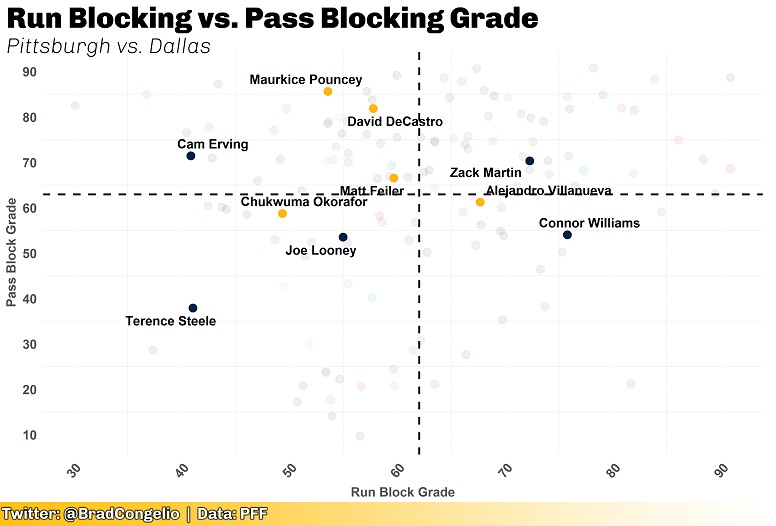 Unsurprisingly, each line suffered in run blocking. For the Steelers, only Alejandro Villanueva scored above the league-wide average while Zack Martin and Connor Williams scored above average for the Cowboys. The good news for the Steelers, however, was the offensive line providing stellar pass blocking for Roethlisberger. Not only did the unit not allow any sacks, they allowed the Cowboys to officially register a hit on Big Ben just twice – although, the one just before halftime was certainly worrisome in the long run as we now have to worry about not only Roethlisberger’s surgically-repaired elbow, but now his knees too. 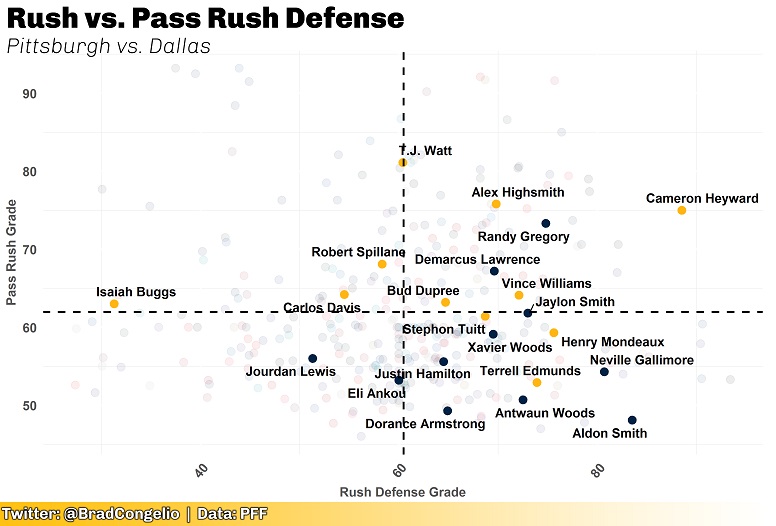 The overall defensive grades from PFF are not terrible for either unit. Cameron Heyward and T.J. Watt, as well as Alex Highsmith, are the clear leaders in defensive performance from this weekend. For the Cowboys, Randy Gregory was the most disruptive force on the field. 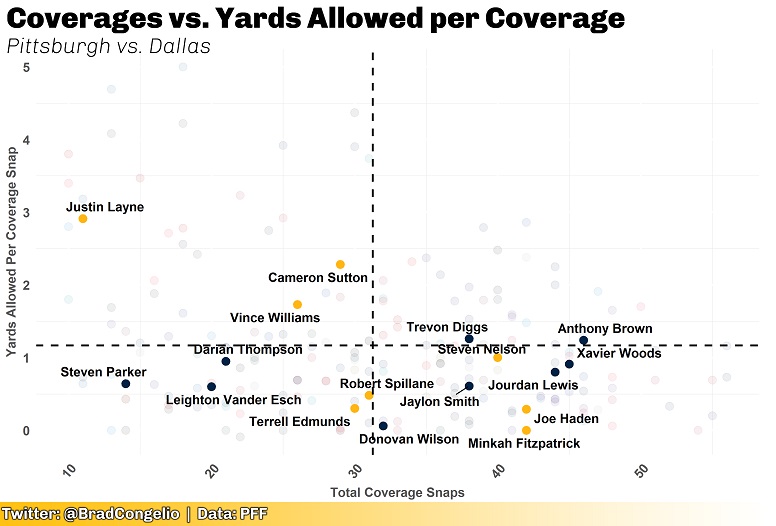 From a pass coverage perspective, the Steelers were generally well below the league-wide average for yards allowed per coverage. Except for Justin Layne. But his performance can be ignored in this context because of the limited number of snaps in coverage he contributed to the overall cause.

Despite the nail biter of a game, the defensive unit is still out there doing elite things.

I think it is unreasonable to expect the defense to keep up the insanely high level of play from the first seven games. That said, we should be happy that the first “downward trend” we have seen came against the Cowboys. More importantly, it came across Gilbert.

Even though the performance was a bit of a let down, the advanced metrics are still positive. And the Steelers defensive unit is still one that many teams would trade for in a heartbeat. 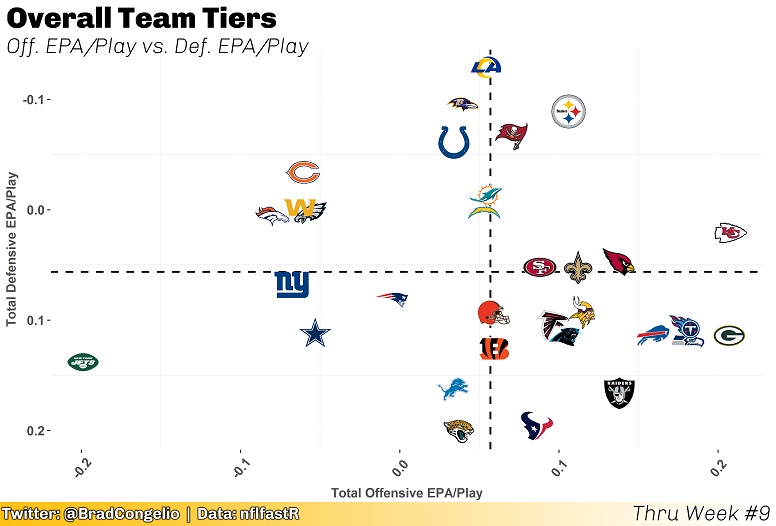 Based on overall offensive and defensive EPA per play, the Steelers are the most well-rounded team in the NFL (thanks to the absolute spanking New Orleans gave Tampa Bay). The Steelers offense, as seen in the graph, isn’t quite as high-powered as the Chiefs offense. But, that is made up by a top-three defense in the league.

Despite the nail-biter against the Cowboys, the advanced metrics against them were still largely in line with the overall body of work this season.