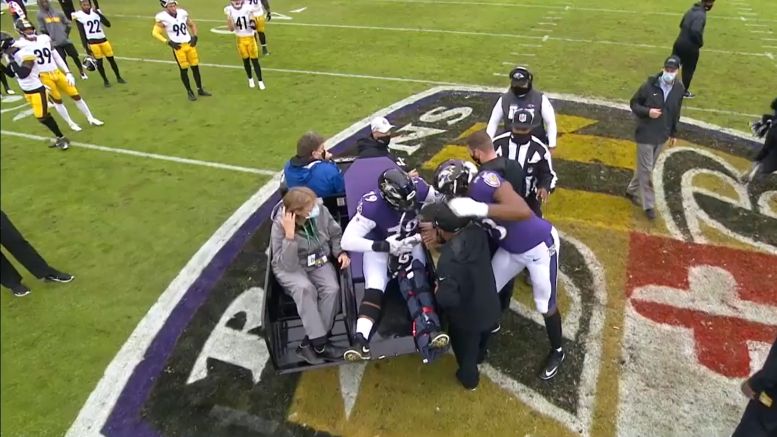 The Pittsburgh Steelers were lucky on Sunday in many ways in which the Baltimore Ravens were not. They had the ball bounce their way to the tune of a season-high four takeaways. They came out of the game with the win after multiple lead changes. And they also escaped a major injury, so it seems, from an All-Pro player, whom they re-signed to a lucrative extension this year.

Unfortunately for the Ravens, they weren’t so lucky on that third item. As much as I will gleefully watch Baltimore turn the ball over and lose games, I will certainly never celebrate a player going down with a serious injury, as All-Pro left tackle Ronnie Stanley did. The team already announced that his season is over with a severe ankle injury.

The Ravens had literally just signed him to a new five-year extension worth $98.75 million on Friday. He didn’t make it out of the first quarter of his next game. But there is no fear that he will be affected by this injury beyond the 2020 season.

The injury occurred at the end of the first quarter on first and 10 from the Steelers’ 41. As Stephon Tuitt was bringing down Lamar Jackson for a sack, T.J. Watt was working around right tackle Orlando Brown to join him, his own momentum in trying to twist Jackson down spun him into the back of Stanley’s knees, rolling over his left ankle and contorting it in a way it ought never be.

After being tended to for some time on the field, he was ultimately carted off with an air cast around his left leg. It’s a tough loss for the Ravens, who will now have to move Brown to left tackle and start D.J. Fluker at right tackle for the remainder of the season as they continue to play musical chairs along their offensive front.

The Steelers, of course, have already lost a starting offensive lineman this season as well in Zach Banner, who suffered a torn ACL in the season opener. Banner, however, was making the first start of his career. Stanley is established as one of the best tackles in the entire league for years.

“So many emotions running thru my head”, Stanley wrote on Twitter. “I’m thankful for all the love and support. I hate feeling like i let my brothers down. What I do know is God doesn’t make mistakes and I’m grateful for the bad days just as much as the good. Just another challenge to overcome”.

Watt, who is not a frequent Tweeter, responded to the message, simply to say, “I feel for you! Get well soon!”. It was a nice gesture from two combatants in what is perhaps the most physical rivalry in the NFL—and has been for well over a decade.

I feel for you! Get well soon!

Of course, this is a team with plenty of talent, and you saw them continue to run over the Steelers even after losing two offensive linemen in the first half. They have a next-man-up mentality as well, so don’t go thinking this somehow makes them much less of a threat, either the next time they play or for the division.