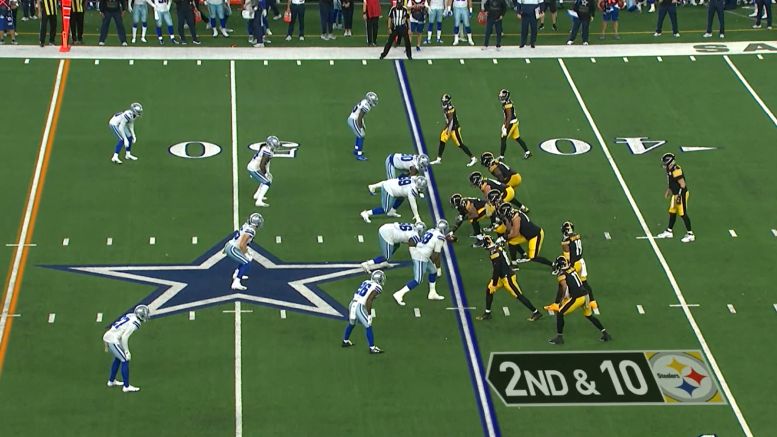 One time is a fluke. Two times is the emerging stages of a pattern. For the past two weeks now, the Pittsburgh Steelers have turned to a five-wide offense in the second half of games after their game plan struggled against their two previous opponents, a halftime adjustment that has seen success. It’s reasonable to assume that we will see more of this going forward.

And the prominence of this package has been a boon for one player in particular, Ray-Ray McCloud, the third-year receiver whose tight-space shiftiness is valued as a second slot option in a formation that also includes JuJu Smith-Schuster, Diontae Johnson, Chase Claypool, and tight end Eric Ebron.

“It’s a highly-skilled group”, offensive coordinator Randy Fichtner said earlier today, via transcript. “Eric gives you some receiver-type of ability from a coverage standpoint. I think it could dictate certain types of coverages that you might not get based on that type of group”.

He added that “it could eliminate certain protection-type issues that they are capable of doing in that or potentially create some isolations and/or in certain instances it might even create zone when otherwise they might not choose to play you in zone in those situations”.

These are the reasons for using it that have been cited for the past two weeks now, Ben Roethlisberger after the Baltimore Ravens game having credited it for helping to slow down the Baltimore Ravens defense, which was throwing a variety of blitzes and pressure packages at them in the first half. The five-wide look and pre-snap motion forced them to declare their defense and play more conservatively.

When asked if they have given thought to expanding the usage of the five-wide look, Fichtner said, “yes and no”, an answer that I’m sure will make some scratch their heads, if not facepalm.

“Sometimes the game circumstance dictates the flow of where you have to go”, he said. “I’d like to be more balanced. We talk about it. We push for it. Sometimes it doesn’t work itself in that direction, so you have to find out exactly where it fits. I think that’s a good question. I’m not opposed to doing it earlier. It’s things we do talk about”.

One thing that’s true is that you certainly can’t be ‘balanced’ from a five-wide set that features no running backs. Over the past two weeks, they have run 59 second-half plays. They have dropped back to pass 46 times and run the ball 13 times.

Ben Roethlisberger has completed 32 of 45 passes in the past two second halves for 353 yards and four touchdowns with zero interceptions and one sack with a quarterback rating of 123.7. They have conversely averaged 1.62 yards per attempt on the ground with just a single first down on 13 attempts.

In the last two games using 01 personnel (4WR,1TE), Ben Roethlisberger is 29 of 38 for 356 yards with 4 TDs and 0 INTs with just an average completion air yard distance of 4.6 yards. Sacked once. #Steelers