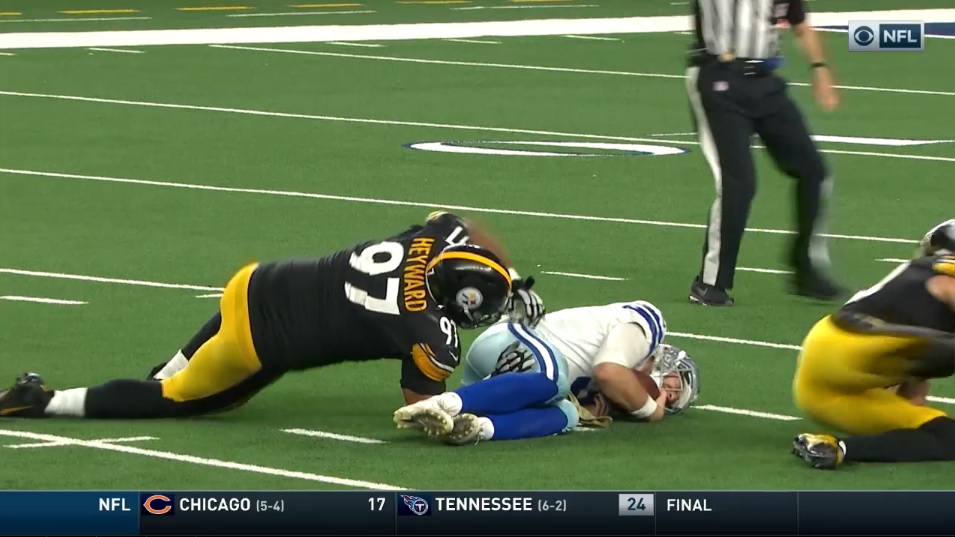 I’m starting to sense a theme with the 2020 Pittsburgh Steelers: they’re rarely pretty, often play their best in catch-up mode, and really know how to give the fan base heart palpitations every week.

Regardless, 8-0 is 8-0, and the Steelers improved to the best ever start in franchise history with a heart-pounding 24-19 win on the road over the Dallas Cowboys to remain unbeaten on the year.

There’s plenty of concern coming out of Sunday’s win, such as Ben Roethlisberger’s health, as well as a massive step backwards by the offensive line and the run defense, but they don’t hand out style points.

Let’s get to some grades and try and enjoy another win.

I’m not quite sure what was going on with Roethlisberger early in the first half, but once he took that shot from Cowboys rookie defensive tackle Neville Gallimore, the ol’ Legend awoke and started slinging the rock all over the field, all while hobbling on a bum left knee.

For all the crap PFF has talked on Ben all season long, saying he’s holding them back, the Steelers won today because of Ben and Ben alone. He put the team on his back on a day in which they were as flat on both sides of the ball as they could possibly be.

I’d like to see him start hitting some deep shots though. Yes, Chase Claypool dropped one, but a couple of the others simply weren’t close. They’ll come though.

Fortunately Roethlisberger returned for the second half because Mason Rudolph was abysmal on Sunday in relief late in the half. Sure, Rudolph completed 2-of-3 passes, but he looked terrified in the pocket, was hesitant to throw the ball and forced a terrible throw over the middle with the Steelers in scoring position that fortunately JuJu Smith-Schuster caught off of a tip.

Not a good day overall for the Steelers’ running backs. That said, I think the poor numbers had more to do with poor OL play and the Steelers being behind script.

James Conner looked strong early in the game when the Steelers were committed to the run, but once the Steelers fell behind and the OL started getting pushed around, the Steelers rightfully went away from the run, turning the offense one dimensional.

The biggest indictment of the run game was the 4th and 1 stop late in the game in which the OL got no push up front and gave Conner no chance to turn the corner.

Anthony McFarland flashed a bit on Sunday, showing off his hands as a receiver, hauling in two passes for 15 yards in the win.

I am concerned with the overall lack of push on Sunday, and the insanity that is running on second and long when it comes to Randy Fitchner.

As I said earlier, Claypool dropped a sure touchdown on a deep ball on the first possession of the game. He also had a couple drops on Sunday and looked like a rookie for the first time this year. Kudos to him though, because he bounced back and finished with a team-high eight catches for 69 yards on 13 targets, helping the Steelers’ offense get going in the second half.

JuJu Smith-Schuster was fantastic again on Sunday, making some insanely tough catches over the middle, picking up a bunch of yardage after the catch. He’s Hines Ward all over again, and dang is it fun to watch. WR1; don’t you forget it.

Diontae Johnson closed the game nicely for the Steelers, making a man miss on the Steelers’ second-to-last drive of the game, picking up 42 huge yards, eventually leading to Eric Ebron’s game-winning touchdown. Johnson was a solid possession receiver throughout the game before breaking the big one. It was good to see him stay patient.

James Washington made the most of his one target, hauling in a 17-yard touchdown late in the first half that sparked the Steelers’ offense. I know there’s a numbers crunch at WR, but I’d like to see him get on the field a bit more.

Ray-Ray McCloud saw a bunch of offensive snaps for the second straight week and finished with two catches for 16 yards.

Ebron saved the day with his hurdle into the end zone, but overall the tight ends were relatively quiet. Ebron finished with just three catches for 22 yards, while Vance McDonald was below average as a run blocker, failing to get a good push up front for the Steelers throughout the game and had a big gaffe on the 4th and 1 run, taking the same guy as David DeCastro.

That was by far the worst game I’ve seen this Steelers’ offensive line play in probably three years.

Dreadful is about the only word I have for it.

Alejandro Villanueva nearly knocked Roethlisberger out of the game again with a huge whiff of a block on Randy Gregory, while Maurkice Pouncey looks cooked as a pass blocker at this point in his career.

Chukwuma Okorafor and Matt Feiler were below average in the run game, while Okorafor really struggled with Dexter Lawrence at times. It was not a good game whatsoever for the Steelers in pass protection or in the run game.

Back to the drawing board.

I thought Cam Heyward and Stephon Tuitt were their usual dominant selves on Sunday, but the interior of the defensive line, specifically Isaiah Buggs and Henry Mondeaux, can’t hold up consistently against the run.

Mondeaux did record a huge stop late in space on Tony Pollard, but overall the interior of the DL was pushed off the ball and really made it hard for the linebackers to roam freely.

Fortunately, Tuitt and Heyward made enough plays when it counted.

Vince Williams showed flashes again of just how good he is against the run, but overall on Sunday he really struggled to stay clean against the run, as did Robert Spillane, which played a key role in the Cowboys racking up 144 rushing yards on Sunday.

Without Tyson Alualu in front of them at the moment, the Steelers’ linebackers are struggling to stay clean inside, which is letting teams get downhill in a hurry.

Outside, it made zero sense watching TJ Watt and Bud Dupree in coverage. Keith Butler’s idiocy in that department gave me Chargers 2018 flashbacks. Not cool.

When Butler let Watt and Dupree rush, the duo made things happen. Let’s not do that against Joe Burrow next week.

It was great to see Alex Highsmith record his first sack. The Steelers really found something there in the rookie.

Tackling, tackling, tackling. Steven Nelson needs to go back to the drawing board there. He was abysmal in that department on Sunday and also gave up a few key plays downfield that really put the game in jeopardy.

Joe Haden was mostly solid on Sunday and was a sound tackler, which is much more than Nelson can say.

I was not overly thrilled with Terrell Edmunds overall. He still won’t look back or the football, and rather than going for the pick on a crossing route, he wanted to blow up Lamb in the second half. Make a play on the football!

Thankfully Minkah Fitzpatrick is on this team. He was spectacular on Sunday, picking off Garrett Gilbert in the end zone and breaking up the final pass of the game at the goal line for the second week in a row. He was also a strong tackler on Sunday, improving his game there for the second straight week.

What an indictment Sunday was for Danny Smith and special teams.

Special teams was mostly solid all year long, but Sunday was a disaster and the Cowboys may have shown teams a fatal flaw in the field goal unit.

Aside from the ridiculous punt return on the throwback, coverage was awful. That 64-yard return on the pooch kick by rookie Rico Dowdle was awful. Steelers had him surrounded and he ripped off a 64-yarder on a kick that he caught at the one.

Then, you have Chris Boswell missing an extra point, having an extra point blocked, but then somehow drilling a 59-yard field goal at the half. Kam Canaday really struggled with his snaps and had no answer for Jack Crawford slipping through the A-gap.

Fortunately, Jordan Berry heard all the stupidity of fans calling for Marquette King (he who has been out of the NFL since September 2018), and kicked the heck out of the football on Sunday.

Berry averaged an insane 50.8 yards per punt, including a long of 62. His numbers would have been even better without that insane trick play on the punt return.