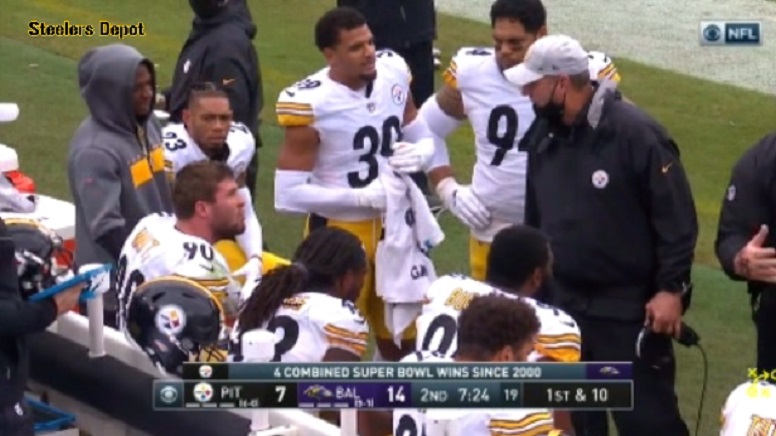 The Pittsburgh Steelers defense certainty did not play a complete game in their Sunday road game against the Baltimore Ravens. Even so, the team still managed to come away with their seventh win of the season and remain the NFL’s only unbeaten team in the process. In the first half, the Steelers defense played poorly enough for it to lead to outside linebacker T.J. Watt and defensive coordinator Keith Butler having quite an exchange on the sideline after the Ravens took a 14-7 lead with 7:24 left in the first half.

After the game was over, Watt was asked about the emotional first half exchange he had with Butler in front of several other Steelers players and coaches.

“I think it’s just football,” Watt said “You kind of have those moments, and they are very candid moments on the sidelines. Everyone wants to be successful, and stuff like that just happens in football from time to time.”

Watt’s reply and reason for his exchange with Butler is certainly understandable and those kinds of discussions probably happen more than we know around the league on a weekly basis only not to be caught by television cameras. At the time of Watt’s sideline exchange with Butler, the Steelers defense had just given up nine play, 80-yard touchdown drive that included eight runs that totaled 69 yards. The Ravens has totaled 131 rushing yards at that point of the game on 20 total carries.

Heading into Sunday, the Steelers had the NFL’s second-best run defense when it comes to yards per game and yards per rush allowed. However, after allowing 265 yards rushing on Sunday to the Ravens, which is the most given up by a Steelers defense in a game since 1993, you can bet Watt, Butler and the rest of the unit will be having a few more heated discussions this next week to make sure nothing like that comes close to happening the remainder of the season.

“Give credit to those guys, they did a great job of executing,” Watt said after the game about the Ravens run game success on Sunday. “We knew it was going to be a challenge, especially coming out of bye week for them, they were going to have some new wrinkles. We said going into this game it was going to be all about execution and knowing our assignment, and every guy knowing his job and not trying to do too much, and I’m sure the film will tell a story.”