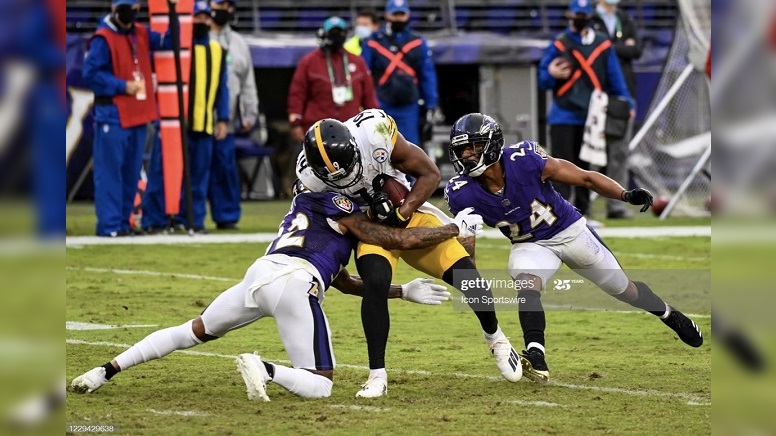 For now, the Pittsburgh Steelers Thursday night game against the Baltimore Ravens on despite the latter reportedly having up to 10 total players and staffers test positive for COVID-19 so far this week.

The NFL said Thursday’s game in Pittsburgh remains as scheduled. Even so, the league has seemed to leave open the possibility of the game being rescheduled if needed, based on further test results.

“We will continue to monitor developments in consultation with our medical experts,” the NFL said in a statement, according to Mark Maske of The Washington Post. “Our foremost concern is the health and safety of players, coaches and game day personnel. There’s no change to the status of the game.”

Adam Schefter of reported on Tuesday afternoon that Wednesday is an important day for the Steelers-Ravens game. A source has reportedly told him that if there are more positive COVID-19 tests with the Ravens that the game could be postponed.

Thursday night’s game vs. the Steelers still is on, as scheduled, but one source warned that further positives could mean postponing it.

So far, the Ravens players we know tested positive are running backs J.K. Dobbins and Mark Ingram and outside linebacker Pernell McPhee. All three have since been placed on the Ravens Reserve/COVID-19 list. One other Ravens player, defensive end Derek Wolfe, showed up on the Ravens Tuesday injury report with an illness so he might be yet another positive COVID-19 test result.

You can bet that the NFL will do everything they can to make sure the Thursday night game gets played because of it being a primetime televised game on Thanksgiving night. Additionally, Steelers-Ravens games are huge ratings draws as well. On top of everything just mentioned, the Ravens are scheduled to play next Thursday night against the Dallas Cowboys as well.