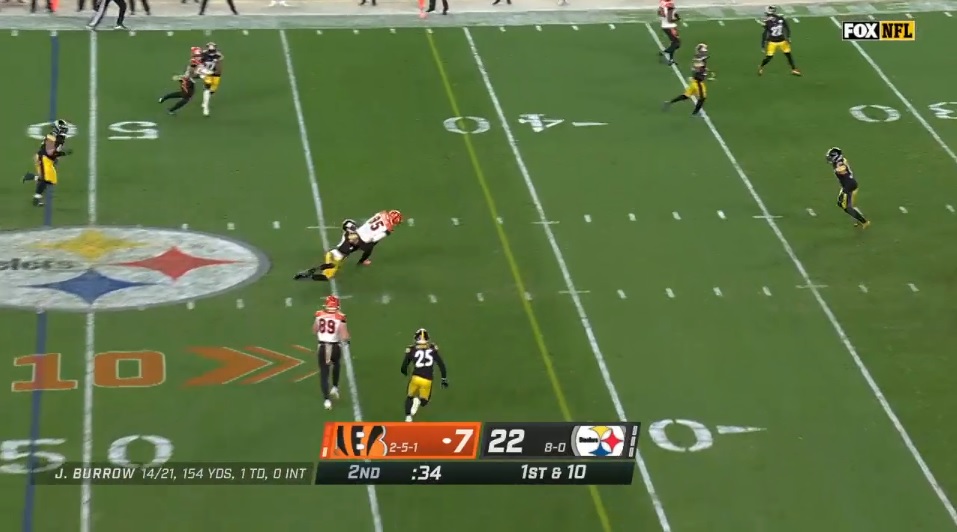 One week after struggling in the tackling department on the road in Dallas, the Pittsburgh Steelers’ defense bounced back in a strong way on Sunday.

While the numbers are the exact same, it’s important to note that the Steelers saw just one defensive starter miss a tackle on Sunday against the Cincinnati Bengals. With such a large lead, the Steelers were able to play a number of backups in the fourth quarter, which resulted in three missed tackles on the final series.

There’s a couple of new names added to the missed tackles list this week in long snapper Kam Canaday and rookie safety Antoine Brooks Jr. Add in names that aren’t always on the list week to week in Ola Adeniyi and Marcus Allen, and well, you can see why I said the Steelers’ starters did a great job tackling on Sunday.

It’s a bit frustrating to see Henry Mondeaux racking up missed tackles because he constantly finds himself around the football when on the field. He needs to clean it up.

Joe Haden was incredible on Sunday, but he had one blunder and it was a missed tackle that led to a first down. More on that later.

Let’s get into the misses.

It’s quite frustrating to see Marcus Allen on the field defensively in recent weeks because he misses tackles at an alarming rate for a guy on the field for only a handful of snaps.

It’s plays like this that really frustrate me. He does a good job dropping into space on third and long and comes downhill quickly to close in on Gio Bernard on the short dump off.

After that though, he whiffs on Bernard in space. Fortunately for Allen, his defensive teammates are there to help clean up the miss and force the Bengals to punt.

In the second quarter, Haden recorded his lone miss of the game, failing to get Tee Higgins onto the ground on a short crossing route.

Higgins is a big, physical receiver that has really excelled after the catch this year, but Haden has to make this play, especially in space.

With the miss, Higgins picks up a first down, extending Cincinnati’s drive. Those are the ones that can hurt you. Fortunately, this one didn’t hurt the Steelers in the end.

Brooks Jr. does a great job getting into the backfield here on the run blitz, but he fails to close down the space against Trayveon Williams, resulting in the miss. On the opposite side, Adeniyi does not do a good job of staying close to the line and closing down the gap. With all that green grass there, it gives Williams a huge cutback lane, which leads to a whiff by Adeniyi as well.

Late in the play, Jordan Dangerfield is fortunate he had teammates around to corral Williams because that’s an ugly angle and close in on the ball carrier.

Offensively, the Steelers had a great day in the forced missed tackles department, forcing 12 misses on the day, winning the tackling battle by a +5 mark.

Yes, Ben Roethlisberger forced a missed tackle on Sunday, and it came on his step up into the pocket on the touchdown pass to JuJu Smith-Schuster. Without stepping up inside of Carl Lawson’s rush, Roethlisberger is likely sacked. Instead, he did Ben things in the pocket and found his No. 1 WR for the touchdown.

James Conner didn’t have a great day overall, but when he was allowed to work downhill he forced a pair of Bengals to miss in the process.

James Washington showed some juice after the catch Sunday, forcing a Tony Brown miss in the win, while Ray-Ray McCloud was spectacular on special teams.

Let’s look at McCloud’s day on special teams, shall we?

If you can make the first man miss on punt returns, chances are you’re going to set yourself up for a big return. That’s just what McCloud did in the fourth quarter against the Bengals, forcing the first man to miss.

After that, McCloud split the seam, forced a second miss, and then turned the punter around near the end of the return for a third miss on the same return.

I can’t believe the Steelers stumbled into him so late in the summer, but I’m thankful he’s a Steeler.

Diontae Johnson is just filthy with the football in his hands, but you knew that already.

That jab step left is so quick and efficient that Jackson is caught flat-footed, allowing Johnson to power back inside to pick up the first down and extend a scoring drive for the Steelers.

He has AB-like movement skills without the attitude issues. It’s refreshing.