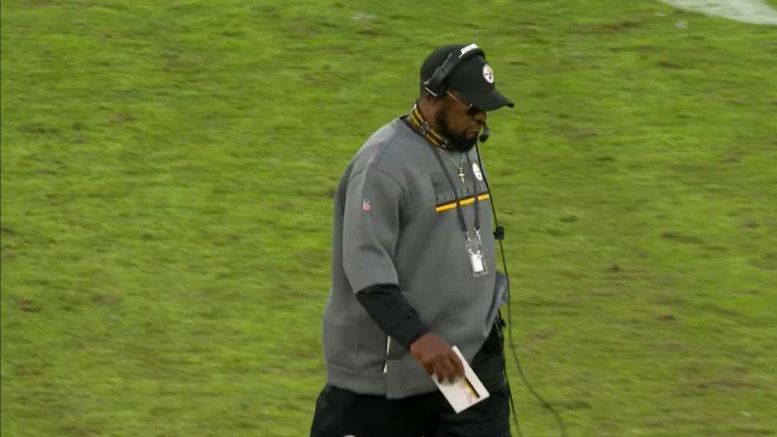 It probably wouldn’t be unfair to say that the Pittsburgh Steelers, at least on offense, came out flat. And while the defense did record a pick six on the third play of the game, they, too, were a disappointment through two quarters, despite recording two takeaways, allowing the Baltimore Ravens to go up and down the field and take a 17-7 lead into halftime.

The offense as a whole managed just 65 yards from scrimmage, with 23 net passing yards and 42 rushing yards. On the other side of the ball, the Ravens put up 254 yards of offense, with 179 of that coming on the ground between J.K. Dobbins, Gus Edwards, and Lamar Jackson, all of whom had 50-plus yards for themselves.

Suffice it to say that head coach Mike Tomlin was very aware of these issues, and he wasn’t altogether surprised by how they came out to start the game, in a certain sense, noting that the Ravens had an extra week to prepare.

“They threw some things at us. They were a group that was coming off a bye, to be honest with you, so I knew that it could be tough sledding early on, and it was, not only on offense, but in all three phases”, he told reporters in his post-game press conference.

Things were different in the second half. Even though the offense had to punt on its opening drive, the defense got them a short field and they quickly converted it into a touchdown, scoring another touchdown by the end of the quarter and taking back the lead.

“We had to adjust, and I thought we needed that 12 or so minutes at halftime to gather ourselves and recalibrate and eliminate some things on our menu and highlight some other things on that menu that were going to be critical to the challenges that were presented”, Tomlin said, noting how key their halftime adjustments were in this outcome.

The offense still came out short at times and the defense still allowed too many big plays and losses on possession downs, which is why the end result ultimately came down to the wire, with Minkah Fitzpatrick batting down a pass in the end zone with time expiring.

But overcoming a 10-point halftime deficit against an excellent opponent who had a bye week heading into the game and who has been historically successful against you is nothing to sneeze at. This is a team that just set a record for the most consecutive quarters in which they scored—a streak the Steelers managed to break.

Things get easier on the schedule from here on out, but the physical and emotional toll of the past two weeks has been extraordinary—and I say that as a fan. They have some wiggle room now, at least as far as the division goes, but they much keep pushing forward, as they did today.