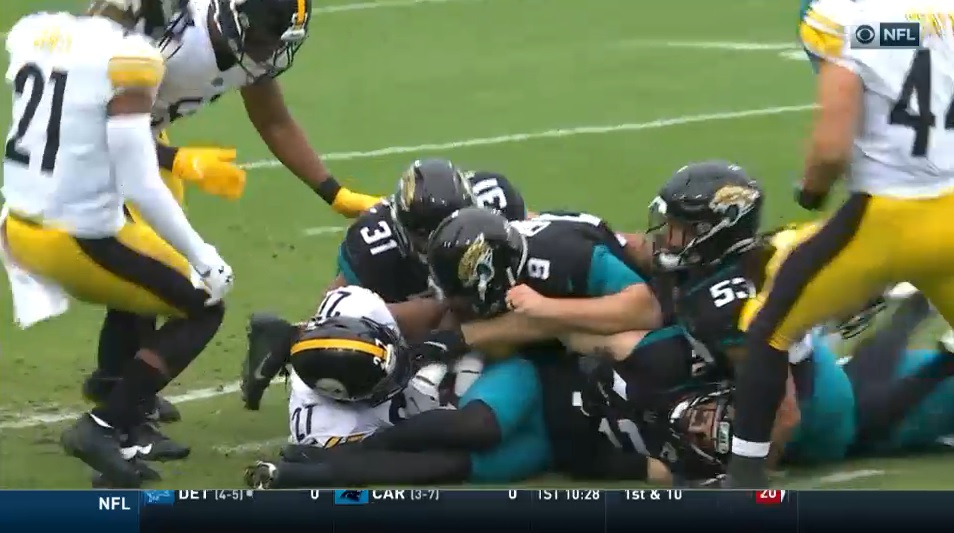 Pittsburgh enjoyed a comfortable Sunday win over the Jacksonville Jaguars. But the game didn’t quite start out that way. The Jags’ marched down the field for an opening drive field goal and like a lot of heavy underdogs, went into their bag of tricks to try to create an edge. On the ensuing kickoff, wide receiver Keelan Cole attempted an onside kick but was thwarted by Marcus Allen, who grabbed the ball among a sea of Jaguars’ defenders to make the recovery.

Underrated moment today. Marcus Allen recovering the Jags' onside kick after their opening drive FG. Heady play. Jacksonville looked for any edge to try to pull off the upset. Nice job to make the play in traffic (and how about the WR with the kick?!) pic.twitter.com/XJiwQOAI8z

Talking with media at his Monday press conference, Mike Tomlin praised Allen for the clutch play.

“They tried an onside kick in the early stages,” Tomlin told reporters via the Steelers’ YouTube channel. “Can’t say enough about the efforts and performance of Marcus Allen in warding that off. Setting the stage for us in letting it be known we weren’t having those type of activities on that day.”

Asked if that was something they specifically planned for, Tomlin said they’re curveballs that are practiced every single week.

“That’s something we work every single week as part of our kickoff return business. You gotta be ready at all times. Part of us being good at what we did, and us being coaches, is eliminating problems before they happen. And Danny Smith is very diligent about working certain aspects in that phase. Surprise onside is one of them. So it’s almost apart of our daily routine.

As Tomlin’s discussed in recent weeks, underdog teams like the Cowboys, Bengals, and now Jaguars are taking big swings in an attempt to upset the undefeated Steelers. Dallas and Cincinnati had success with their fakes – though the Bengals’ fake punt was moot with the game long over – but Pittsburgh got a big stop yesterday against Jacksonville.

Though Allen’s recovery didn’t lead to points, Chris Boswell missed his first field goal of the season, but it halted any momentum the Jags were trying to build. Ultimately, the Jags’ only points came on that first drive. From there on out, Pittsburgh pitched a shutout.