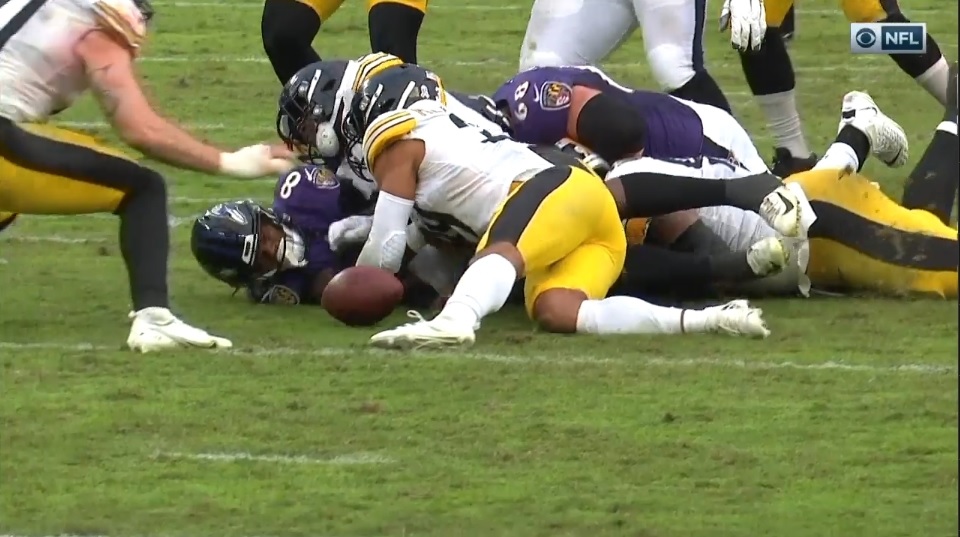 No team has had a better plan against Lamar Jackson than the Pittsburgh Steelers. That speaks to the level of talent they have defensively, that much is obvious, and the gameplanning and preparation by players and coaches. But maybe some of it is mentality too. Not worrying about Jackson’s impressive, MVP resume, his highlight reel, or any of the stats and numbers. Shifting the focus on doing your job, treating Jackson like the nameless, grey faces the Steelers always talk about.

That mentality was evident in Mike Tomlin’s answer about containing Jackson.

“We have respect for him but we do not fear him,” Tomlin told reporters in his post-game press conference.

The numbers back that up. Jackson certainly made his plays Sunday but overall, his box score isn’t impressive. 13/28 for 208 yards, 1 TD and two interceptions. He was sacked four times, fumbled three times, and averaged just 4.1 YPC, a far cry of the nearly seven yards per tote he entered today with.

In two games against Jackson, he’s completing just 57% of his passes with four touchdowns and five interceptions. He’s been sacked nine times and fumbled on four occasions. Pittsburgh’s one of the few teams to make him feel human. And they made the biggest plays against him late. Isaiah Buggs, Vince Williams, and Minkah Fitzpatrick sniffed out a 4th down draw late in the fourth quarter with Baltimore down four points.

Jackson’s three turnovers Sunday were all critical too. Robert Spillane’s pick six crucially put points on the board as the offense sputtered in the first half. Bud Dupree forced a fumble as the Ravens were driving in the red zone, recovered by Vince Williams. And Alex Highsmith’s pick gave life to a Steelers team down 17-7 early in the second half, leading to Eric Ebron’s score that made it a brand new game.

“We’re not going to be surprised by anything that transpires,” Tomlin said about his defense forcing so many turnovers.

Sunday’s performance wasn’t pretty. It wasn’t the brick wall defense fans have gotten used to seeing on a weekly basis. Jackson broke contain several times, Gus Edwards and JK Dobbins gashed them for big runs, and the Steelers blew multiple second half coverages. But it isn’t easy against the Ravens’ potent attack and like any good defense, they got pressure, took the ball away, and saved their biggest plays for late in the game.