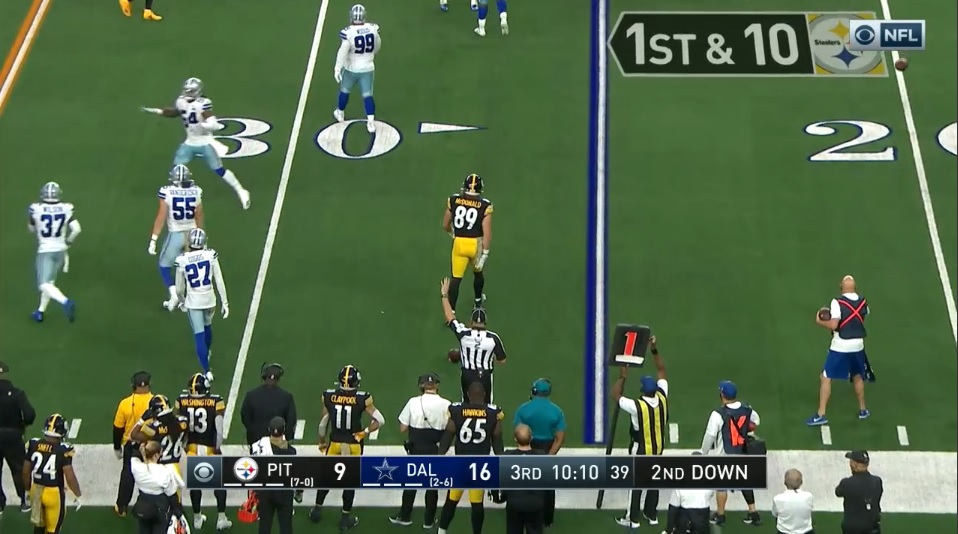 Vance McDonald is the first Pittsburgh Steeler to test positive for COVID-19 since the regular season began. Late last week brought initial warning signs after McDonald failed to practice Friday due to an undisclosed illness. But McDonald tested negative for the virus leading up to the game until his Sunday morning test – which the team received results of late Sunday night or early Monday morning – came back positive.

During his Tuesday press conference, Mike Tomlin was asked why McDonald was given the green light to play versus Dallas despite showing signs of being sick, even though the team didn’t know if it was COVID-related or not.

“Those aren’t decisions that are made by us,” Tomlin told reporters. “It’s really cut and dry. It’s all in the procedural policy of COVID established in New York by the NFL. As long as he is negative and not showing signs of COVID, he’s able to travel. And he was, and we did, and we don’t overanalyze it in that way. We utilize all the mechanisms at our disposal to minimize the potential of interaction. We’re all masked up. We’re all exercising good personal hygiene and social distancing. We’re doing all the things that are asked and that’s our mindset regarding it.”

The Baltimore Ravens had a similar experience in their game against the Pittsburgh Steelers in Week 8. Ravens’ CB Marlon Humphrey received a positive test after playing in the game. That put several Ravens’ players on the COVID list, missing the week of practice, though all but Humphrey were able to play in this past weekend’s game against the Indianapolis Colts.

The Steelers seem to be in a similar boat this weekend. Four players deemed close contact to McDonald: QB Ben Roethlisberger, ILB Vince Williams, RB Jaylen Samuels, and OT Jerald Hawkins have been isolated but as of yet, not tested positive for the virus. All four will miss most of practice this week but if they continue to test negative, should be available for Saturday’s walkthrough and Sunday’s game against Cincinnati. McDonald will not be eligible to play this weekend.

More broadly, the NFL will have to wrestle with another question now that these scenarios have played out in Baltimore and Pittsburgh the last two weeks. Players who are ill but test negative, play in the game, and then test positive after the fact. It’s a difficult line to walk. Are players who are sick period – even with negative testing – forced to sit out in an abundance of caution? Or will the league have to accept this potential risk, one that’s likely to increase in winter months when colds and other sickness naturally increases? A better solution would be quicker test results as opposed to waiting 12-24 hours. The chances of making that reality are unclear.

The good news, at least, is these positive tests don’t seem to be leading to outbreaks to their opponents or even throughout their own locker rooms. But the potential is there and that’s a risk the league will continue to assess going forward.