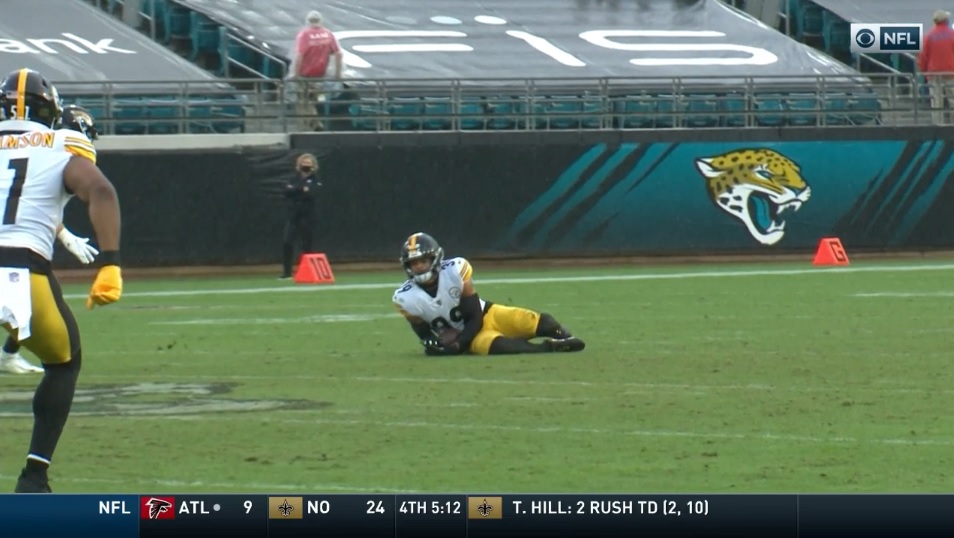 The Pittsburgh Steelers defense played lights out and shut down the Jacksonville Jaguars in their 27-3 win.

The Jaguars got off to a quick start with rookie quarterback Jake Luton, but the drive would stall outside of the redzone. It would lead to a field goal, and they would lead 3-0 after the first quarter.

In the second quarter, the Steelers were able to get a field goal after a promising drive stalled to tie the game up at three.

Ben Roethlisberger would find James Washington for a twelve yard gain after a personal foul penalty put them in Jaguars territory. On the next play, Big Ben finds Chase Claypool for a 31 yard touchdown. The Steelers took a 10-3 lead early in the second quarter.

Jaguars would move the ball down the field in a hurry on the next drive, after a completion from Luton to D.J. Chark of 18 yards. After entering the redzone, Luton would be intercepted by Minkah Fitzpatrick. The Steelers never looked back from here.

On the ensuing possession, Roethlisberger would connect with Dionate Johnson for two big gains of twenty yards or more. It would put them in them at the one yard line where Benny Snell would run it in from a yard in. The Steelers led 17-3 late in the second quarter.

The second half saw another dominant performance from the defense. They would come out and force four straight punts to start the second half, while the Steelers offense sputtered through the third quarter.

The defense were bringing pressure on Luton all day long, sacking him twice and forcing him into four interceptions on the day.

In the fourth, the Steelers would bleed out the clock, and add an early fourth quarter field goal to extend their lead to 20-3. The defense would give them the ball right back, on a Terrell Edmunds interception, his second of the day.

The interception would lead to a Steelers touchdown pass from Big Ben to Eric Ebron for a 20 yard touchdown to put the dagger in the Jags, 27-3.

Luton would throw his final interception of the day to Minkah Fitzpatrick, also his second of the game.

The Steelers would run out the clock and win 27-3 to move to 10-0 for the first time in their history. Big Ben completed 32 of 46 passes, 267 yards and two touchdowns. Fitzpatrick finished with five tackles, and two interceptions.

The Steelers will face the Baltimore Ravens next on Thanksgiving Night at 8:20 pm on NBC.