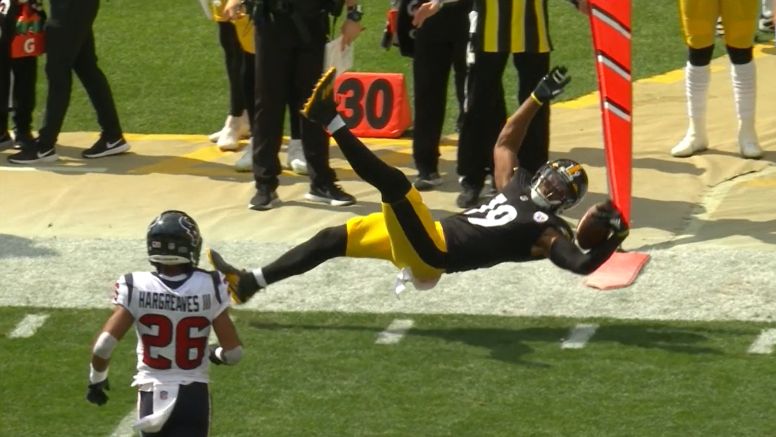 While there haven’t been a lot of big explosive plays available for wide receiver JuJu Smith-Schuster to make this season for the Pittsburgh Steelers, as he has in years past—his longest play this year is just 31 yards, though it went for a touchdown—the fourth-year veteran is still making an impact, particularly in recent weeks.

In just the past four games, he has been responsible for 31 receptions, going for 322 yards, with two touchdowns. In the previous five games, he only had 28 receptions for 194 yards, though he also had three of his five touchdowns on the season.

The biggest difference? He’s getting more targets. He was only targeted 28 times in the first five games, hardly more than five per game. In the past four, Ben Roethlisberger has looked his way 42 times, more than 10 times per game on average. And he’s been delivering, particularly on possession downs.

“I think of it as, third down gets you paid, as far as like, you play the third down and you move the sticks, you keep giving your offense another chance to get another three set of downs to make plays and to drive into the end zone”, he told reporters when speaking to the media on Wednesday.

In just the past four weeks, Roethlisberger has thrown his way 16 times on third down. That has yielded 13 receptions, one touchdown, and 10 first downs. He is one of only three players during that span to have at least 10 first downs when targeted on possession downs, the others been Keenan Allen and Davante Adams.

“On third down, although you don’t want to be in that situation where it’s third and long, I love and embrace those moments”, Smith-Schuster said. “I’m hoping the ball comes my way. I’m praying that ball comes my way. Just because I want to make a play. That’s not just me. I’m pretty sure everybody on the team, they want to make a play for the offense. For me, when you make plays on third down, you get paid”.

As the season goes on and he continues to play a larger and larger role in the functioning of the offense, it is becoming increasingly obvious that somebody is going to be paying Smith-Schuster in 2021 for all the third downs he is converting.

Frequently this season, Roethlisberger has actually been targeting the 6’1”, 215-pound receiver short of the sticks on third down and putting him in opportunities to use his physicality, almost like a tight end, to fight his way to the marker.

It has been working, because the Steelers have gotten better at moving the chains through the air. They are currently the sixth-ranked offense on converting on third down, converting 61 of 130 opportunities. On the season, 17 of them belong to Smith-Schuster, or 28 percent of them.